An Albert Lea man has been charged with two felony counts for alleged drunken driving during a three-vehicle crash Saturday in Albert Lea that injured an Emmons man. 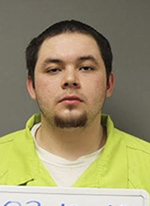 Omar Sanchez Jr., 19, faces two counts of felony criminal vehicular operation, one count of gross misdemeanor carrying or possessing a pistol without a permit in a public place, and two misdemeanors, driving while intoxicated and possessing more than 1.4 grams of marijuana in a motor vehicle.

Court documents state Sanchez was charged after Albert Lea officers received a report of a traffic crash at about 6:40 p.m. Saturday at the intersection of Fifth Street and Frank Avenue.

Upon arriving, an officer reportedly noticed a gray Nissan Maxima perpendicular in the roadway in front of 502 and 506 E. Fifth St.

Sanchez was driving a Nissan Maxima east on Fifth Street when he failed to stop at a stop sign, traveling 80 mph and striking the rear-end of a parked 2004 Lincoln LS, according to Albert Lea police. The Lincoln reportedly traveled 30 feet into a trailer that landed on its side in the middle of the road. The Nissan veered right, striking and damaging a light pole. Sanchez reportedly exited the car and was standing on the north side of the street in a neighboring driveway when police arrived.

Court documents state the officer smelled alcohol on Sanchez, and he had watery eyes and slurred his speech.

The passenger of the vehicle, Oscar Leonard Galvin, 24, of Emmons was unconscious after the crash. He reportedly suffered at least a broken collarbone, according to court documents, and was later taken by a critical care team to St. Marys Hospital in Rochester.

No field sobriety tests were conducted on Sanchez because he was reportedly uncooperative and could not communicate with the officer.

Several .45-caliber bullets were reportedly found in Sanchez’s pocket, along with a baggie of marijuana weighing 3.2 grams.

An empty Glock 10-round magazine was found on Galvin, and a .45-caliber handgun was located near Galvin’s feet. Live rounds and spent casings, four empty beer cans and a partial bottle of vodka were also found, along with baggies of marijuana that weighed 4 grams and 2.1 grams.

The owner of the vehicle, Jose Angel Gutierrez, 23, was cited for having no proof of insurance. He was not in the car at the time of the crash. Gutierrez said he had a Glock 30 gun in the driver’s door of the vehicle and had a permit to carry in Iowa.

As of Monday afternoon, Sanchez was in custody.