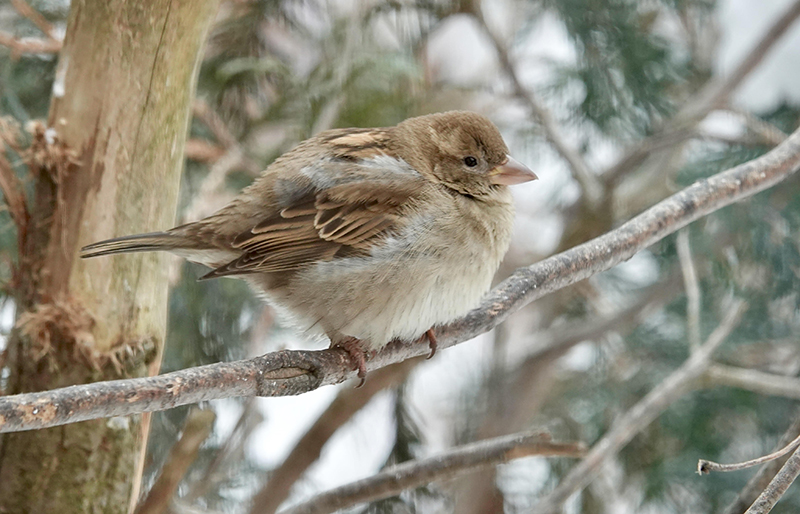 “Everything is nearly copacetic. Bears and the occasional farmer have come out of hibernation. I ran my best one-mile run ever. I made 100 yards. I bought some stuff off one of those TV infomercials that said it would grow hair on a bowling ball. It did grow hair on my bowling ball, but it sure messed up my game. I used a coupon for breakfast yesterday. Some people gave me grief for that, but I use coupons because I’m sure that somewhere along the line, I’ve overpaid for something. Plus, I’m cheap, as tight as King Midas’s fist.”

The day remained frozen in patches of faded white.

The world was hurrying by at squirrel speed. An entire Olympics could consist of one event: trying to catch a squirrel. Whoever caught one would get the gold medal. There were snow-bones, the persistent patches of snow left behind along fence lines toward the end of winter or after a thaw. Blue jays called loud and often. I tried to find the cause for their alarm, but could not. Blue jays are like callers to talk radio; it’s impossible to keep up with the reasons for their outrage. Robins, having made a colossal commute, looked for worms where they found green grass. Birds are beginning to have a lot to say. A rooster pheasant did a double-squawk outside my window. Red-winged blackbirds, song sparrows and house finches sang.

Where there was open water, I saw ducks floating like bobbers. A wet farm field next to my house entertained swans, Canadas, redheads, bluebills and mallards. They were a noisy bunch.

Just past the middle of March was when I saw a groundhog and chipmunks active in my yard. I watched a male cardinal feed his mate and a male jay do the same for his. These were pair bonding exercises.

I spotted an American kestrel hovering over a road ditch. It faced into the wind, flapped its wings and adjusted its tail to remain in place. I saw a pair mating on a utility wire.

I watched a bald eagle flying high over a road. The eagle was carrying a stick. A bald eagle will lug a stick up to a mile to its nest. I’ve heard of an eagle carrying a 5-foot long branch.

I saw house sparrows here and there. Once common birds in London and associated with the term “cockney sparra,” they are now essentially extinct from central London. Cats, air pollution and pesticides are being blamed.

I birded Minnesota, Iowa, Missouri and Kansas on March 25. I saw meadowlarks in all four states. The western meadowlark is the state bird of Kansas, decided by a vote of over 121,000 school children with 43,895 votes cast for the meadowlark. The bobwhite finished second and the cardinal third.

Russ Hauenstein of Blanco, Texas, asked when deer drop their antlers. Most of the white-tailed bucks in Minnesota have shed their antlers around mid- to late January. There are always exceptions.

“Why are squirrels chewing on the asphalt of the street?” It was likely licking minerals (especially salt) from the road.

“What’s a field mouse?” It’s a nickname generally used for a white-footed mouse, deer mouse or meadow vole. The mice often move into houses in the fall, but I’ve never found a vole indoors.

“How fast can a racing pigeon fly?” Dependent upon weather, a good racing/homing pigeon could probably hit 60 mph.

Bluebird Recovery Program of Minnesota Annual Expo is on April 14. Registration begins at 8 a.m. and the program will begin at 9 a.m. at Cannon Falls High School. For information, email expo@bbrpmn.org or call 507-645-9470. Register online at www.bbrp.org.

Bill Seele of Cresco writes, “You recently answered a question on birds flying upside down. Just wondered if you had heard the junior high joke from 50 or 60 years ago that goes, Confucius say, ‘Duck who fly upside down may quack up!’”

This from Harvey Benson of Harmony: “When my mother got her first hearing aid many decades ago, (and they were not so good then), the first thing she said was, “I can hear birds again.”

“The environment after all is where we all meet; where we all have a mutual interest; it is the one thing all of us share. It is not only a mirror of ourselves, but a focusing lens on what we can become.” — Lady Bird Johnson

“Choose to be optimistic, it feels better.” — Dalai Lama