Al Batt: Spring is drawing near because nothing is far away — hopefully 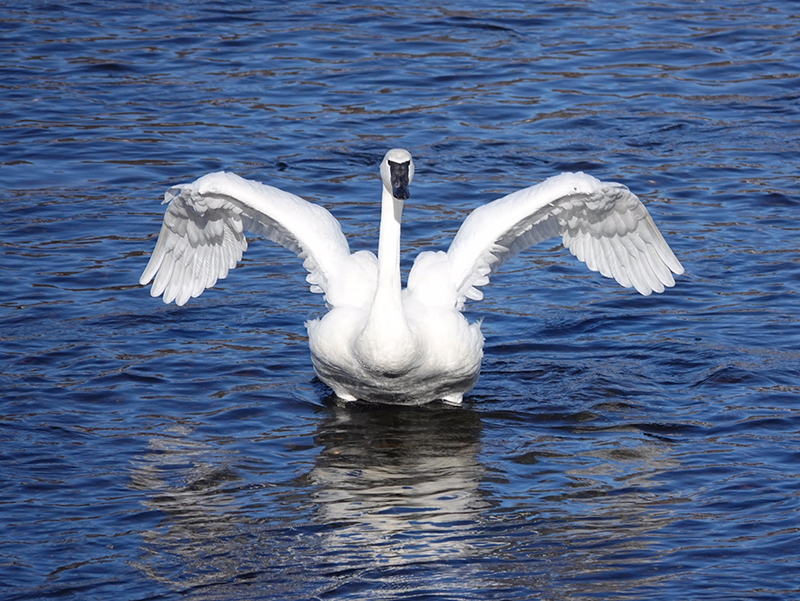 The “Trumpet of the Swan” by E.B. White is a children's book written about a trumpeter swan. - Al Batt/Albert Lea Tribune

“Everything is nearly copacetic. A dry March and a wet May fill barns and bays with corn and hay. As it rains in March so it rains in June. My clock radio died during the night. At least it was kind enough to record the time of its death. I figured I’d have to go outside to get to a clock radio store and replenish my supply. Then I had an epiphany. The weather here is the same every day, unless I go outside. That’s a profound statement. As I drove to town, I congratulated myself on my wisdom in driving a black pickup truck. I don’t believe in owning a white truck because we have snowstorms. I found a $5 bill on the ground outside the store. What made it seem worth more than a $5 bill in my wallet, money I’d worked for? I guess it’s the gift that counts.”

I stopped in Monticello to look at the trumpeter swans that winter there. As I marveled at the sounds and sights, I mumbled an old tongue twister, ”Six sleek swans swam softly southwards.” I’ve always liked that one as I’ve found it one of the easier to say.

As I drove home from Bagley, I saw an American kestrel perched on a utility wire. Data collected from research studies have indicated long-term declines of kestrel populations in North America. Undetermined causes have contributed to an average drop of 50 percent across the continent since the 1960s.

In my yard, starlings hit the suet like a gang of marauders. Blue jays spouted obscenities at a hawk. A rooster pheasant tried to run through tangled vegetation after sighting the raptor. Its actions nudged something inside my thinker. I thought of John Cleese. A Monty Python sketch depicted Cleese as a civil servant who, after purchasing a newspaper from a newsstand, walked through the London streets in a peculiar manner before arriving at his office in The Ministry of Silly Walks. If its walk was any indication, the rooster must work at the same place.

Spring is near. I know because nothing is far away.

“Am I seeing a crow or a raven?” American crows are seen in larger groups than ravens, which often travel in pairs. Crows caw and ravens produce a lower croaking sound. Ravens are larger, the size of a red-tailed hawk. Watch the bird’s tail as it flies overhead. A crow’s tail feathers are all about the same length, so when it spreads its tail, it opens like a fan. A raven has longer middle tail feathers, so its tail appears wedge-shaped when open. The raven has a larger bill than a crow does. Check a range map in a field guide to see if ravens are where you are.

“How long are a trumpeter swan’s wings?” Cornell Lab of Ornithology says they are 79.9 inches, the Trumpeter Swan Society measures them at 84-96 inches and the Minnesota DNR finds them stretching from 72 to 98 inches.

“I saw a muskrat on the road in February. What was it up to?” It might have been searching for food due to a lack of it at its pond. Muskrats build houses by piling vegetation and those domes have underwater entrances. Muskrats are active all winter, so they need to eat and unlike beavers, they don’t store food. They find food on the bottom of a pond or lake, diving into cold water to get it.

“Why do geese honk when flying in flocks and other birds don’t?” Most other birds are unable to honk, but that’s their problem. It’s thought that geese honk in flight to keep up communication with the flock, encourage stray birds to resume positions, maintain correct speed and distance and preserve a V-formation that enables geese to conserve energy and fly longer distances due to a drafting effect. Many other birds make sounds while they fly in flocks, but most are quieter than geese, so they aren’t always heard by us.

“I saw some bluebirds this winter. What are they eating?” Wild fruits and berries make up the main part of their winter diet. That includes red cedar, dogwood, hackberry, wild grape, poison ivy, sumac and other plants. They eat any insects they can find.

“Do the more colorful cardinals do better than less colorful ones?” Brighter males have higher reproductive success and hold better territories. The intensity of a male cardinal’s redness is related to what he’s been eating. Vivid colors are a signal that a male is healthy and has a good territory.

“To rid yourself of old patterns, focus all your energy not on struggling with the old, but on building the new.” — Dan Millman

“The earth has music for those who listen.” — George Santayana