A Bricelyn man who allegedly sold a total of more than 20 grams of methamphetamine in two undercover operations was charged Thursday in Faribault County District Court. 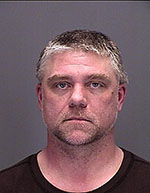 The informant reportedly handed $440 to Clark in a vehicle in an Albert Lea parking lot. Clark reportedly came back to the parking lot in the vehicle and left nearly 7.5 grams of meth.

Court documents state Dec. 7, the task force and a confidential informant again arranged to purchase meth from Clark. In that incident, 14.4 grams of meth was reportedly sold for $700 at a Bricelyn business.

As of Monday morning, Clark was in custody.