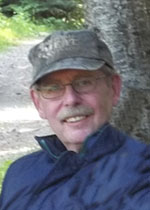 Charles “Chuck” Harold Bolinger, 70, passed away peacefully with family by his side on Sunday, March 25, 2018, at Mayo Clinic in Rochester. Chuck was born March 8, 1948, to parents Harold and Doris (Minks) Bolinger in Janesville. He was raised in Albert Lea and graduated from Albert Lea High School.

Following graduation, Chuck was drafted into the U.S. Army for two years and was very proud of his service. He was a member of the American Legion for 50 years.

Chuck married Marcy Bolinger on Oct. 30, 1975, in Blooming Prairie. Together they made their home in Albert Lea and had one son, Keith.

Chuck held several jobs over the years, including driving truck for Wilson & Co. and Interstate Meat Service and working on the line at Winnebago Industries.

In his free time, Chuck could be found up at his cabin near Grand Marais. He loved riding ATVs and was vice president of the Cook County ATV Club in Grand Marais. Chuck was an avid ATV enthusiast who not only spent countless hours riding, but who also spearheaded the creation of the Hovland Woods ATV Trail, otherwise known as the “Happy Trail.”

Chuck joined the Cook County ATV Club board in 2012 and was the liaison with the Minnesota Department of Natural Resources during trail construction. He and Marcy were a trail-clearing force, and they came up with the idea for the Twin Bridges Overlook picnic area on the trail. They oversaw the development of the site, which is enjoyed by ATV enthusiasts, mushers and hikers alike. Chuck and Marcy hosted many rides, including the annual Tom Lake Ride & Shoot, at which Chuck enjoyed launching clay pigeons for friends. He also helped on every organized ride — rain, shine or snow. No one ever got lost when Chuck was the ride leader.

Chuck enjoyed fishing and grouse hunting up north. He could always be found tinkering on anything mechanical, including ATVs, boat motors and vehicles. He was able to fix just about anything, too. Chuck would drop everything he was doing in order to help someone in need. Most importantly, he loved spending time with his family and his four grandchildren. He was extremely proud of all that Keith has accomplished in his life. His four grandchildren were his greatest joy.

In lieu of flowers, memorials can be sent to Cook County ATV Club, P.O. Box 455, Grand Marais  55604 to help fund youth ATV safety courses, as Chuck was such a huge advocate for ATV education and safety.