Cheri Register’s body finally gave way to Caroli’s disease Wednesday, March 7, 2018, after a much longer and richer life than she ever imagined.

Born April 30, 1945, in Albert Lea to Gordon and Ardis (Petersen) Register, she was raised among lakes, marshes and oak savannah. She was lucky to be enrolled in Albert Lea High School’s stellar humanities program, which helped propel her to the University of Chicago — where she earned Bachelor of Arts, Master of Arts and PhD degrees in Scandinavian languages and literatures. 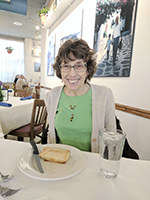 Active in the Women’s Liberation Movement in Minnesota, Register was a cofounder of the Emma Willard Task Force on education — a pioneering effort of gender equality in schools. Activism and scholarship combined in her pioneering role in the fields of women’s studies and feminist literary criticism in the United States and in Sweden. In the 1970s she was a leading figure in the literary and academic world in Sweden and helped to create the women’s studies department at the University of Minnesota, where she taught from 1974-80, leaving academia to pursue her first love: writing.

Cheri Register’s most notable contributions have been in the field of memoir, where she used aspects of her own experience to pose research questions that opened up topics often misunderstood and overlooked. Her book, “The Chronic Illness Experience,” elicited hundreds of letters from readers grateful to have their story told. Two books on international adoption explored the experiences of adoptees as well as adoptive parents, and fearlessly faced the moral dilemmas their stories posed. At that point she turned her attention to the lives and landscapes of her family in southern Minnesota, winning two Minnesota Book awards for her powerful writing and deep research. “Packinghouse Daughter” told the story of a 1959 strike in Albert Lea, weaving together her memories as the 14-year-old daughter of a Packinghouse worker with the historical record. The result is a powerful meditation on class, an homage to her hardworking parents and a series of reflections on the complexities of memory. Her most recent book, “The Big Marsh: The Story of a Lost Landscape,” draws on clues from her grandfather to recover the history of a marsh land and the human interventions that led to its draining for agriculture and development. This story of a lost, wild place evokes echoes of many other valuable and beloved spaces transformed by greed and intrigue. Her favorite response from readers has always been, “you’ve told my story.”

Register taught creative writing at The Loft for more than two decades, mentoring many other writers. Writers groups formed in her classes are still meeting many years later. She was a member of Westminster Presbyterian Church from 1975, where she served as elder and recently as church historian and archivist.

She was preceded in death by her parents, and her sisters and brothers-in-law Nancy and Roger Wangen and Joey and Rodger Squires.

Her life was rich with family and friends who loved her adventurous spirit, her wisdom and grace, her truthful presence, her gentle humor and her incredible fortitude. Her daughters carry on those gifts. To her last breath she was grateful for the family and friends who rallied around her and especially to Linda DeBeau Melting, her friend of 60 years who has always been there in times of joy and of need.

A celebration of Cheri Register’s life will be at 2 p.m. March 25 at Westminster Presbyterian Church. All are welcome. Those unable to attend in person are invited to livestream the service at westminstermpls.churchonline.org.