Funeral services for Clarence F. Beenken of Albert Lea will be at 11 a.m. Tuesday at East Freeborn Lutheran Church. The Rev. Matthew Griggs will officiate. Visitation will be from 4 to 7 p.m. today at Bonnerup Funeral Service and one hour prior to the service at the church. Interment will be in East Freeborn Cemetery. Military honors will be accorded by the Albert Lea area veterans group. 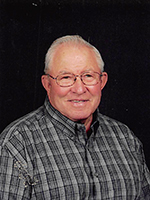 Clarence was a farmer all his life, first in Wesley, Iowa, until 1970, when they moved to rural Albert Lea. He retired in 2005 and moved to Albert Lea. He was an active member of East Freeborn Lutheran Church, serving as a deacon. He was also a member of American Legion Post 56, Vetereans of Foreign Wars and Elks Club.

In his free time Clarence enjoyed bowling; golf (had a hole in one!); traveling with his wife throughout the United States, Alaska, Hawaii and Europe; trips down the Mississippi with grandchildren and going to Cutty’s in Okoboji, Iowa, for over 30 years.

He was preceded in death by his parents; brothers Irvin (Orpha) Beenken and Kenneth Beenken; sister, Helen (George) Schmidt; and father- and mother-in-law Vernon and Ellen Hellie.