A memorial service for Donald A. Drommerhausen of Albert Lea will be at 2 p.m. Friday at First Lutheran Church in Albert Lea. The Rev. Sean Forde will officiate. Visitation will be one hour prior to the service at the church. Military honors will be accorded by the Albert Lea area veterans groups. Interment will be at Graceland Cemetery. 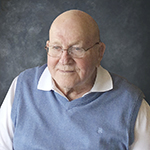 Donald was born Feb. 26, 1927, in Albert Lea, the son of Arthur and Blanche (Thompson) Drommerhausen. He went to Albert Lea High School and then joined the Navy.

On Oct. 30, 1949, he was united in marriage to Lois Evenson at First Lutheran Church in Albert Lea.

Donald was employed by Wilson & Co./Farmstead Foods as a truck driver. Wherever he went he really enjoyed meeting and getting to know people. He was an active member of First Lutheran Church.

He enjoyed sports and socializing with his friends, and the time he spent with his children and grandchildren. Don loved sharing a bag of candy with his many visitors and all of his wonderful caregivers.

The family is very grateful for the wonderful caring staff at Good Samaritan. Memorials are preferred to Good Samaritan Society of Albert Lea.