Funeral services for Elmer Joel Stensrud of Freeborn will be at 10 a.m. Saturday at United Methodist Church in Albert Lea. The Revs. John Mitchem and Kent Otterman will officiate. Interment will be in Freeborn Cemetery. Visitation will be from 5 to 7 p.m. today at Bonnerup Funeral Service in Albert Lea and one hour before the service at the church. 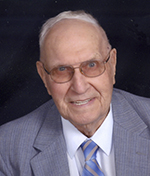 He graduated from Freeborn High School in 1947 and then farmed with his dad and brother, Glen, north of Freeborn. In addition to a lifetime of farming, Elmer also proudly drove school bus for Freeborn and United South Central School districts for more than 54 years, was a Pioneer seed corn dealer, and was active in the Area Service County Committee and the Freeborn Boosters Club. He was a longtime member of Freeborn Congregational Church, held many offices and served on several committees.

On Aug. 28, 1960, Elmer and Merle were married in Freeborn. To this union three children were born: Carol, Joel and Dale. Together, they enjoyed following the Golden Gophers with a history of 58 years of men’s basketball season tickets.

Elmer was active in basketball and softball in high school, continued playing on local town teams and also enjoyed all spectator sports.

Elmer is survived by his wife, Merle, of Freeborn, his three children and their families: daughter, Carol (Brian) Schultz, of Wells and children Katie (Nate) Walton, Noah, Grace, Selah and Titus of Bricelyn, Jennifer (Eric) Wendinger, Carson, Aubrey and Bethany of Fairfax, Sarah (Cole) Ramsley, Maya of Fairfax, Laura Schultz of Wells and Andrew Schultz of Wells, son, Joel (Linda) Stensrud, of Freeborn and children Chad (Hannah) of Freeborn, Jessica (Brad) Tomschin (with a blessing soon to arrive) of Alden, and son, Dale (Stacie) Stensrud, of Freeborn and children Kayln Stensrud of Freeborn and Brayden Stensrud of Mankato; sister, Myrna McKean, of Freeborn; mother-in-law, Leona Schwartz, of Northfield; sisters-in-law and brothers-in-law Jan Prescher of Ellendale, Joyce Stenzel of Albert Lea, Lowell and Toni Larson of Dent, Ken and Wendy Larson of Austin, Kevin Schwartz of Arizona, Judy Schwartz of Shakopee, Barb and David Gingrich of Eagan and Phillip Morreim of Albert Lea; and many nieces and nephews.

He was preceded in death by his parents; his brothers Dale and Glen; brothers-in-law Bert Mckean, Marvin Stenzel and Herb Prescher; and sister-in-law, Sharon Morreim.

In lieu of flowers, donations are preferred to the Salvation Army or Youth for Christ.