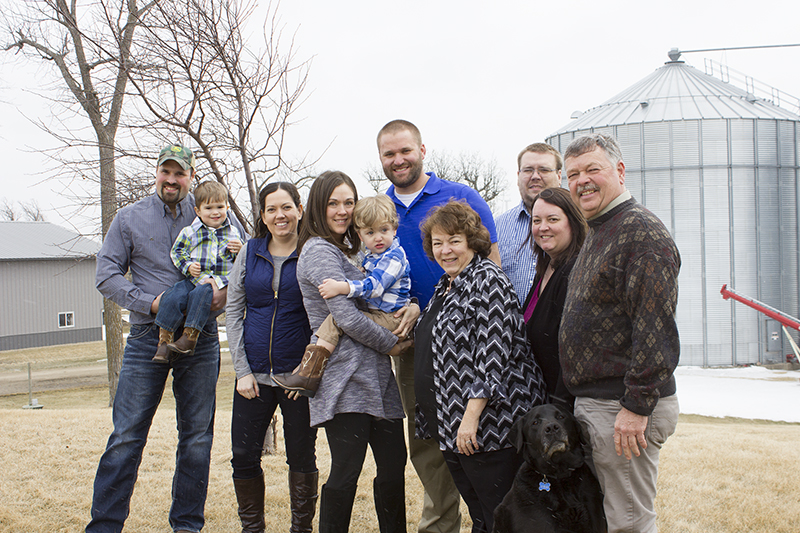 The Ausen family was named the 2018 Farm Family of the Year Tuesday, an award that symbolizes the major role they play in the community. - Sam Wilmes/Albert Lea Tribune

“It was quite an honor,” said Becky Ausen. “I mean, there’s a lot of people ahead of us who have gotten this. It’s an honor to think that maybe we’ve done something in the community that people think that we deserve this honor.”

“It came by surprise, actually,” David Ausen said. “We didn’t really expect it.”

The family operates about 1,100 acres, including harvesting and planting work done for landowners.

The couple’s four daughters, Katie Ausen, Stefanie Stevens, Melissa Metzger and Jackie Henke, all grew up on the farm. Stevens’ husband, Matt, helps the Ausens on essentially a full-time basis for most of the year.

David Ausen’s brother, Bob Ausen, who lives in North Carolina, returns to the farm every fall to help harvest.

“It literally is a family farm, how it’s ran,” David Ausen said. “I do have some seasonal help other than family members, but not too much.”

The Ausens used to raise animals — pheasants, hogs, cattle and chickens — but the family home and farming structures were destroyed in the 2010 tornado outbreak.

After the tornado, work crews helped clean up the damage, and the week after the tornado all eight of David Ausen’s siblings returned to the community for an all-school reunion.

“A lot of people helped out,” David Ausen said.

“It was unreal,” Becky Ausen said. “It was phenomenal.”

Construction on the family’s new home started in October 2010, and they moved into their new residence in April 2011.

The couple are involved in their church, West Freeborn Lutheran Church. Dave Ausen is church president, while his wife serves as secretary. He is a member of the Freeborn County Soil and Water Conservation District, while Becky Ausen is employed at Good Samaritan Society of Albert Lea and is a Rotary Club member.

The couple were 4-H and parent-teacher organization volunteers when their children were growing up.

“We’ve always been active in the community with kids’ things,” Becky Ausen said.

The couple, who are in their early 60s, hope to pass the family farm to Matt and Stefanie Stevens upon retirement. The farm has been in the Ausen family since 1857, one year before the state of Minnesota was founded.

“I’ve never left the farm,” he said. “I feel an attachment to the county, like it’s home — always has been, always will be.”

The couple’s children said they were excited their parents received the award.

“It’s a pretty big award to win, and to be compared to the other people who have won it in previous years, it’s quite an honor, and there’s some great farm families, too, so just a great honor to be recognized as the Farm Family of the 2018 year,” Katie Ausen said.