Farmers share their anxiety over trade with USDA secretary 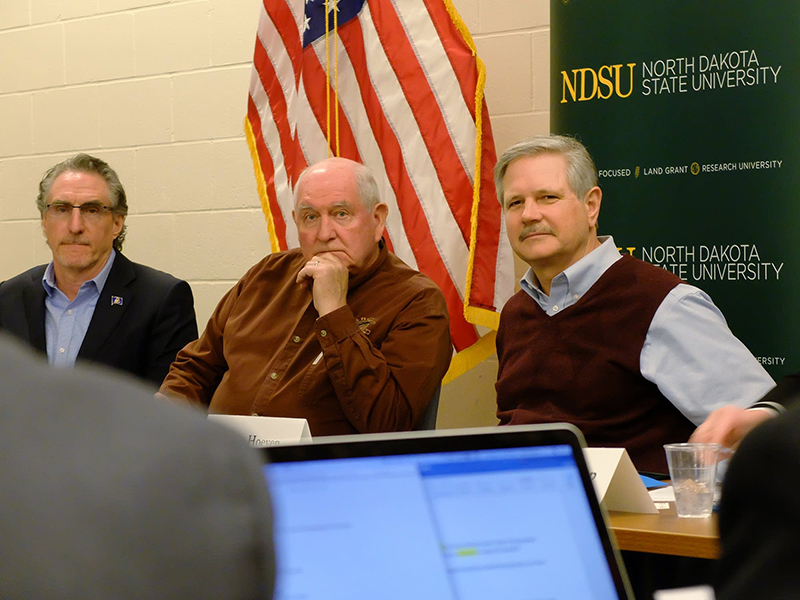 The meeting with Perdue came amid ongoing talks with Mexico and Canada to renegotiate the North American Free Trade Agreement — and just a day after President Donald Trump fanned concerns about a global trade war by signing an order for steel and aluminum tariffs.

Like many farmers, Lenz supports Trump administration efforts to scale back environmental regulations. But he’s worried about the possibility the president will pull out of NAFTA, much like he did the Trans Pacific Partnership.

“The reality is you know regulations are helpful, but if I lose trade it kills me,” Lenz told the ag secretary.

Perdue said Trump believes pulling out of trade deals is the best way to get a better deal.

Speaking with reporters after the meeting, Perdue said he was very concerned about retaliation against farm exports when the president rolled out tariffs on steel this week. But, he said he’s feeling much better after Trump agreed to protect key NAFTA partners Canada and Mexico from the tariffs.

Perdue said he expects the president’s positions on trade to be flexible.

“The good quality he has, while he’s forceful, he’s decisive and he moves forward and he’s very determined, there’s a little back door if you can find it and he’s willing to change his mind and that’s what we try to do,” Perdue said.

Perdue said Trump’s negotiating skill should not be underestimated. But he warned that world trade could be unsettled for some time.

Rep. Kevin Cramer, R-N.D., was an early, vocal supporter of President Trump. He said the president is trying to fix unfair trade provisions farmers have complained about for years, like Canadian restrictions on import of some farm commodities.

“I think therein lies one of our biggest frustrations, that while Canada does these things to us we tend to not fight back and then when we fight back we kind of wring our hands and go ‘oh my gosh you know are we going to have a trade war,’” he said. “You know, it’s okay to fight back once in a while.”

Farmers just hope they won’t be collateral damage in those fights.

Kevin Skunes farms near Fargo and is president of the National Corn Growers Association. He agrees trade agreements like NAFTA need to be reworked, but he said every time President Trump talks about scrapping NAFTA, the markets drop and farmers get squeezed.

“You know that’s really detrimental, we’re operating at or just below our profit margins right now in agriculture and you know it’s quite a trying time in agriculture we don’t need these little hiccups,” he said.

“I’m anxious as well along with them and I will be anxious until we get a NAFTA recertified, reauthorized, an improved, modernized NAFTA and then address the other nations around the world with our other importing countries that we depend on,” he said.

Perdue said good progress is being made on renegotiating NAFTA and he’s hopeful Trump will consider getting back into a trade deal with Pacific Rim countries.