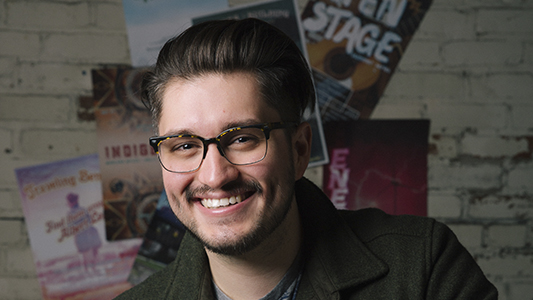 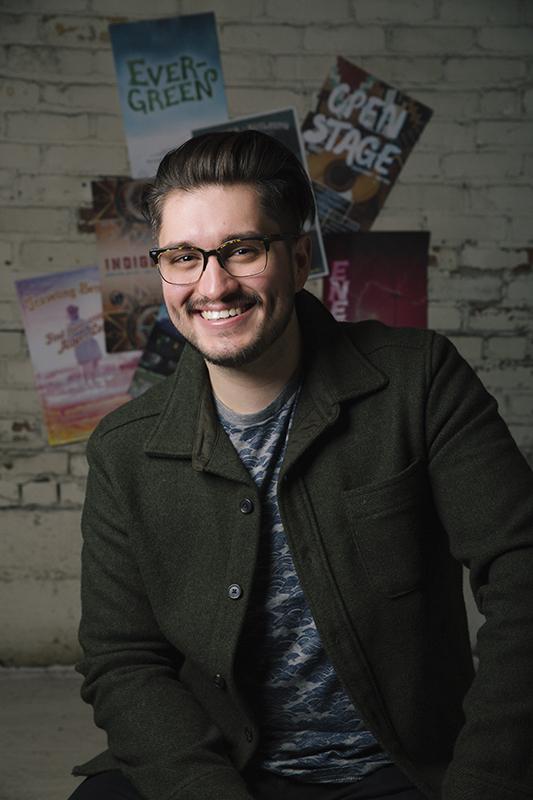 As they hang the show, the pair at Freeborn County Arts Initiative disagree about the correct adjective for the show.

It is Elisha Andrew Marin, president of the Freeborn County Arts Initiative, whose graphic artwork is featured in its first solo exhibition. He said his designs come out with a style he calls “whimsical.”

Whatever adjective they decide on, it’s on display at the Arts Initiative’s gallery in the form of 12 large-format and 12 standard-size posters.

Crane said the show comes at a time when graphic art is having its time in the sun. The gallery is booking two years in advance, so the show was planned ahead of the attention.

“Posters are a huge, huge hit right now,” Crane said. “… Graphic art in, like, cool urban venues is, like, a huge thing right now. We didn’t know that two years ago. We just seemed to hit it.” 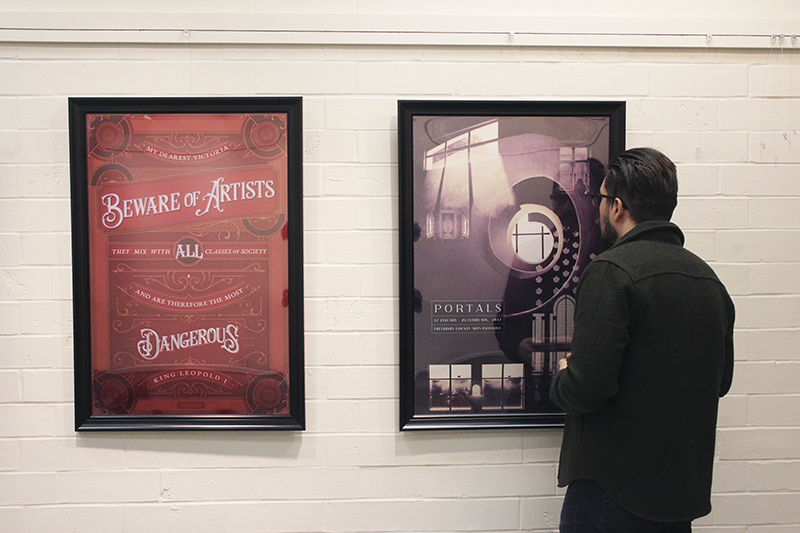 Elisha Andrew Marin inspects a poster as he and Susanne Crane prepare the gallery space for the opening of “Poster Child.” –
Sarah Kocher/Albert Lea Tribune

Marin said many of the posters on display may have been seen by community members around Albert Lea. Some are for gallery exhibitions, some for social issues, some for live music, some for community events.

“Most of the work here has been you know, like tacked on cork boards in Hy-Vee or taped onto people’s windows in downtown businesses,” he said.

Seeing them displayed together is about conceptually challenging the idea of art, Marin said.

“This is a new media to be explored in Albert Lea,” he said.

While he has also worked on book and album covers and web design, Marin’s primary love in design work is posters.

“It’s a really, like, weirdly disconnected or hands-off process when you’re making something on the computer and that’s, like, my biggest issue with web design is you never get to touch it, or you never get to see it,” Marin said.

“I love print design because it gives you something tangible at the end of the day,” Marin said — it’s something he can pick up from the print shop and hold his design in his hands.

This appreciation for the tangible has influenced his designs, too. Marin is trying to incorporate more physical objects into his designs as well as textures and visual art techniques from other media.

“I think he hits it like a painter,” Crane said.

One of the posters in the show is one Marin designed for the Freeborn County Arts Initiative’s most recent member show, “Evergreen.” The title text is created by groupings of digitized pine needles that started as the real thing. He photographed pine needles and transformed them in a design program to come out the way the poster looks now.

The texture comes out to play in Marin’s design for “There and Back Again,” Crane’s show at the MacNider Museum in Mason City. The pair drove to the museum close to 5 a.m. to photograph the museum in golden light, Marin said. In the final poster, he substituted the sky with a blue canvas number swiped from the back of one of Crane’s paintings. He made the roof purple. All of the windows are filled with Crane’s artwork. There’s a woman with red hair peeking out from a second-story window, holding a candle aloft. It’s part of an effort to capture the theme of Crane’s surrealist vibe, Marin said.

Freeborn County Arts Initiative board member Shanda Meyer said she sees the effort Marin puts in to find and capture the feeling of a piece.

“He puts a lot of time and effort into these instead of like, ‘Oh I’m just going to slap this and this together,’” Meyer said. “That’s why this ‘Poster Child’ exhibit is so important, is that most people think that mediums are, mediums are just painting or photography or sculpture or stuff like that.”

Some of the pieces have been revamped for the show, as they were not all designed to be displayed in large format. Crane said choosing Marin for a graphic arts show was a unanimous board decision.

“We’ve just been wowed by the diversity of his work,” Crane said.

The latest of this work is the design for his own show, which is also on display as part of the exhibit. Marin has cast himself as the proverbial “starving artist,” backdropped by his own posters and holding an enamel mug. The letters for the text are pulled from different posters he’s designed. He’s added a slight halo behind his own head.

“A lot of my work is kind of tongue in cheek,” Marin said.

But whatever adjectives Marin and Crane side on, graphic art as a medium is no joke.

When: Today, 7 to 9 p.m. The display opened Thursday and runs through April 28.