Some of my happiest summer memories include spending time in Albert Lea for the Fourth of July celebrations. One reason I loved the celebrations is I got to see my dad helping lead the Third of July Parade in his police car. Whenever I was watching the parade, I made sure to sit near the end of the route, so I could also go watch my dad be a crossing guard at the final intersection. He would stand in a bright-colored vest in full police uniform, including the police hat, chatting it up to passersby and smiling and joking with those who were just finishing up their parade march. 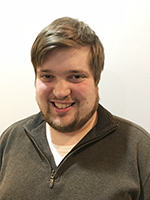 My family owes a lot to Albert Lea, but seeing my dad as an active and friendly police officer in public on the Third of July each summer is a cherished memory I will never be able to repay this community.

My dad, Dwaine Winkels, is retiring from 35 years of law enforcement on Friday. He was an officer in Albert Lea 33 of those years. His law enforcement career in Albert Lea has seen a lot of changes to the department, full of great success stories and of course some hard times, countless budgets, Monday nights at City Council meetings, and through it all a continual push with his co-workers to keep Albert Lea safe.

Professionally, my dad was most proud of the work his police department has done in community policing. He started it when he became chief of police, and, considering how much he talked about it at home, I cannot imagine his excitement for it at work. I did not know all the officers, firefighters, dispatchers and other city and county employees my dad worked with, especially in this last decade that I have not lived in Albert Lea. However, if the people I did know among his co-workers were any indication, my dad had an amazing group of people he got to work with. It is easy to tell how proud he is of the work his fellow public servants put in day after day.

As my dad retires, his community involvement has meant as much to him as his police work. Over the years he was involved in Rotary, the Children’s Center, the Crime Victims Crisis Center and Albert Lea Youth Soccer Association. My dad first got involved in soccer when I started playing during the summers. That turned into coaching summer soccer for years, even after my sister, Elizabeth, and I were both done playing, as well many weeknights refereeing soccer games both in the summer and fall.

If he wasn’t at a work function or a soccer game, he was spending time with his family. My sister and I had a bunch of music and sporting events for him to go to when we were kids, he always had time for camping and fishing trips, and we visited my mom’s family near Alexandria many weekends. Since Dad’s family grew up in Austin, we got to visit extended family often on day trips and holidays.

It seems likely that fishing will be one of Dad’s primary hobbies after retirement, as well as improvements to the house they are moving to near Alexandria. Moving means my dad and mom will be living closer to Elizabeth, myself, my wife, Anna, and their grandson, Asher.

Albert Lea has been a wonderful community for our family and was an excellent place for my dad to make a career. Some of my favorite memories during his time as a police officer include playing with the police decorations in his office, him picking me up in uniform after elementary school, eating lunch at the Elbow Room with him and other officers and getting to see my dad help lead the Third of July Parade. Good luck to all his fellow public servants as they move forward and improve how they serve the community. Thank you to everyone who gave my family the many opportunities we have had here. I hope that after 33 years, at some point you got the chance to see first-hand how Dwaine made the most of those opportunities.

Jacob Winkels was born and raised in Albert Lea and is the son of retiring Public Safety Director Dwaine Winkels. Jacob currently lives in Fargo, North Dakota, with his wife and son.