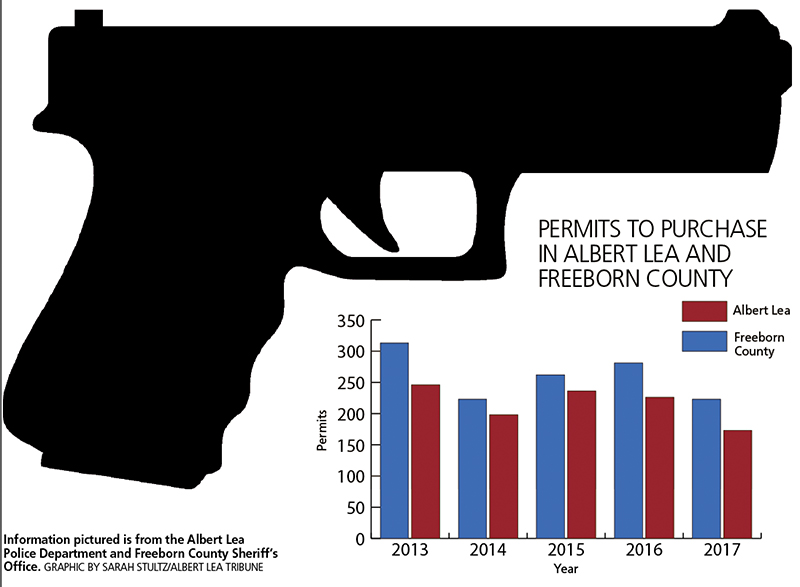 Number of permits locally, statewide have dropped since 2016

The number of permits to carry and permits to purchase issued locally significantly dropped in 2017, and law enforcement officials credit the decreases to the 2016 presidential election.

“The closer we got to the presidential election, those definitely drove the numbers up,” said Freeborn County Sheriff Kurt Freitag. “The impending election drove those numbers up for permit to carry and permit to purchase.”

“It’s of course politically-driven, and people were fearing if liberals were to assume the presidency, a lot of their gun rights would be taken away or greatly regulated, and so they wanted to get out and make their purchases before things may become illegal.”

Freitag credited President Donald Trump’s election with the drop in permits to carry and permits to purchase.

“Trump was elected, and a lot of people sighed with relief that Second Amendment rights were not going to be repealed, so the numbers dropped off quite a bit,” Freitag said.

For the three years prior to 2016, the number of permits to carry fluctuated less.

Freitag and Albert Lea Deputy Director of Police J.D. Carlson said more permits to carry or purchase take place following mass shootings due to fear of legislation that would either ban or restrict access to certain firearms. The United States has experienced several mass shootings in previous months, including in Las Vegas; Sutherland Springs, Texas; and Parkland, Florida.

“It’s not significant, but enough to where you notice (there are) a little bit more applications being submitted,” Freitag said.

“The numbers kind of ebb and flow,” Carlson said. “You can kind of tell in watching the news and what is going on in the news, the next thing you know you’ll see a line of people down here in the lobby coming down to get permits to purchase.”

Freitag cited state statistics showing permit-holders committed 1,335 crimes in 2017, more than 54 percent of which were DWIs or traffic offenses.

“This is a good thing in my opinion, because this is indicative of a low number of violent crimes,” he said.

Statewide, 89 permits were suspended, 50 were revoked and 658 were denied, according to the Minnesota Bureau of Criminal Apprehension.

“That’s good,” Freitag said. “That means we are doing our job in finding these people who are ineligible.”

He said he wants permit-holders to be vigilant for any situation they could face.

The counties that issued the most five-year permits in 2017 were:

There are 282,838 valid permits in Minnesota, according to the BCA.

Farmers share their anxiety over trade with USDA secretary