Ideas shared on how to address housing needs 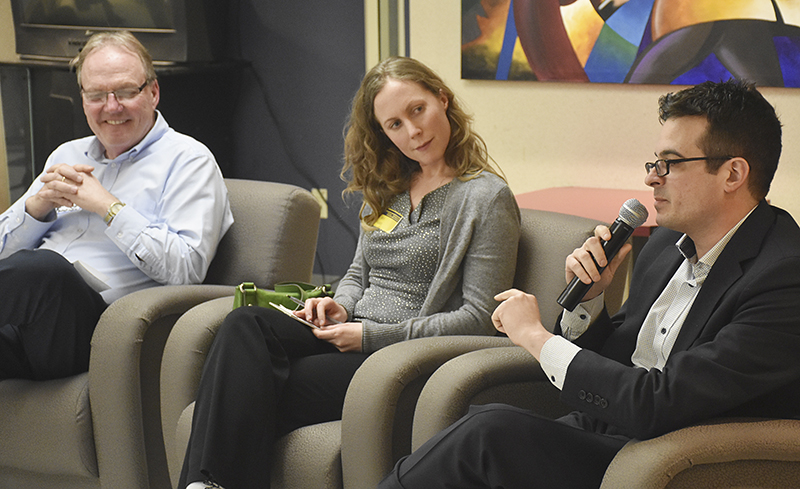 AUSTIN — According to Ann Austin of the United Way of Freeborn County, the Albert Lea area has made strides in tackling housing needs, but there is still much work to be done.

She has worked closely with underprivileged populations in trying to fix barriers to housing, from availability to structural issues.

A program called “Rock the Block” brought together volunteers to rehabilitate houses in the area, an effort that eventually impacted some 50 homes, she said.

Her discussion of that work in Albert Lea was just one of many ideas and stories brought to the regional housing forum, hosted by the Governor’s Task Force on Housing, held Wednesday at Riverland Community College in Austin.

Representatives from housing, government, business, church, community action and other non-profit groups throughout southeastern Minnesota gathered at the college to discuss housing needs in the state, the first of seven such forums to be held.

The forums have one major goal: To listen to what different areas of the state are doing to address availability and stability of their housing stock.

“Our charge … is to have ready, by the end of June, recommendations” to the governor about what actions can be taken in relation to housing, said Olmsted County Commissioner and former state senator Sheila Kiscaden.

She is one of 28 to serve on the task force, following its establishment by Gov. Mark Dayton in December.

“We are not here with answers; we are here with ears,” Kiscaden said.

There was a lot to hear.

“Our employment is expected to grow 150 jobs a year over the next 10 years,” Forstner said. Employers “tell us that their employees choose to live in other communities, due to lack of housing,” he said.

And that ripples through the economy of Austin, where the impact is felt from schools to retail sectors, he said.

Austin Mayor Tom Stiehm appointed a housing task force some years ago, and since that time, a tax abatement program on new home construction has been successful, Forstner said, with abatement applications approved for 25 new homes in Austin, and another 30 in Mower County over the past year.

Other recommendations from the Austin task force included addressing gap financing, use of tax increment financing, and working on ordinances dealing with rental properties.

Gabrielatos said, however, that a tax abatement program — similar to Austin’s — has only garnered lukewarm acceptance. There were 15 that showed interest in the past year.

“The challenge for us … is that we’re giving money away, but we’re not getting any bites,” he said, despite advertising on Facebook and use of mailers to Realtors and contractors.

Albert Lea also held a housing summit and “while people were interested, the thing we heard … was about the need for rehab dollars.”

Hemmerlin said Red Wing faced a scarcity of new housing, with no rental housing built since 2004, and only a handful of homes built following the 2008 housing crisis.

He brought to the Red Wind City Council an idea for an affordable housing trust fund in 2015, which the city accepted. The fund, which assists developers, is funded through an HRA levy and city dollars. Use of TIF is also being explored for a 294-unit rental project now being considered by the city, he said. The city has also created a Homebuyers Assistance program.

A 61-unit rental project, built last year, has proved to the city that higher rents — always thought to scare away tenants — has not held true. Rent of $1,200 and higher have not been a barrier to rentals, he said.

But Ann Austin noted what may be successful in Red Wing may not fly in Albert Lea. She wasn’t sure those kinds of rents would be affordable in her city.

But that did not mean there were not options.

“I think there are many opportunities for housing development,” adding she knows of a lot of peers who find it more affordable to rehabilitate existing homes.

“I think that is something we can capitalize on,” she said.

She added a growing immigrant population is showing interest in owning homes.

The challenge to housing, she added, has to be answered by asking, “how do we work with people moving to our community, and how do we assess their needs?”

However that is done, there are solutions, she said.

“I think people are inventful and insightful” in the housing conversation. “I believe we can find the right answers together.”

Proposal would give aid for students in trade classes