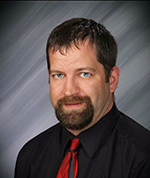 A visitation will be from 5 to 7 p.m. Friday at Hogan Bremer Moore Colonial Chapel and will continue one hour prior to Jason’s service Saturday.

Jason was born April 27, 1972, in Charles City, Iowa, to Sue Crooks and Ronald Mead and father Robert Crooks since 1975. He graduated from Plymouth Christian Academy in 1990 and later earned his business and social degrees from Kaplan University. One of his fondest memories was gathering around the family table studying and doing homework with his boys as they all pursued their educations together.

He married Suzanne Rogness on Jan. 29, 1991, at First Baptist Church in Mason City. As unique as Jason always was, it was a Tuesday evening wedding — not the standard the world would have done. They were blessed with three sons, Robert, Brent and Daniel; and stepdaughter, Cassandra.

Many hours were spent playing many board games, attending school concerts and watching the Vikings together. Later he became a great Cubs fan and was so happy to have attended a game with his sister in Chicago a year before they were World Series champs.

Jason’s first employment was at Country Kitchen with Jay Kavigne, who became a good friend. Jason moved on to manage Country Kitchen in Decorah, Iowa. Later he managed several Cinema theaters throughout Iowa, then returned to Mason City to be with family. He owned Garner Cafe for a couple years, and though he loved the food business, he knew he should further his education and knew he wanted to make a career of helping others. After graduating with his business and social degrees, he worked as a caseworker for a three-county area in Iowa before he moved on to Albert Lea, where he worked as a social caseworker at the Salvation Army. He would always say, “As long as I can help others in any way, I’m happy.” He was being proactive by teaching the Ramsey financial program in addition to his work. He always recognized others who just needed another chance in life.

Though Jason struggled with ongoing pain and health issues stemming from a serious fall when he was 9 years old, he tried to enjoy his love of fishing, hunting, trapping and recently was running up to 10 miles to train for upcoming marathons as he had done a few years ago. He loved training hunting dogs and just being buddies with his dogs, enjoying the great outdoors as much as possible through the years. His current faithful friend was Hawkeye.

All who knew Jason will so miss that hearty laugh, his dry, witty sense of humor and that gleam in his eye that told you he sensed something more than you probably did, even about yourself. He could share his God given wisdom with just a few words — some stern but always filled with love and encouragement.

He was preceded in death by his grandparents Gordon and Harriet Mead and Marilyn and Dean Bradley; father, Ron Mead; uncle, Richard Mead; and aunt, Beverly DeLeeuw.