On Thursday, March 8, 2018, Joanne Marie (Jo Youngstrom) Norgaard was reunited with the love of her life, Daniel Arthur Norgaard, who passed April 7, 2016.

They were married Oct. 9, 1954, at First Lutheran Church in Albert Lea. 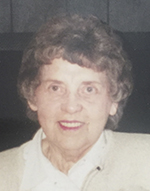 Their presence is missed by so many friends — but especially their daughter, Nancy Lee Morris, and her husband, Mark Morris, of Wayzata; their son, William Daniel Norgaard, and his wife, Kristi Norgaard, of Anthem, Arizona; their granddaughter, Shayla Rose Norgaard; and grandson, Nick, and his recent bride, Katie Norgaard.

Jo was born and raised in Albert Lea and a graduate of Abbott Northwestern School of Nursing in Minneapolis. Dan and Jo moved to Sumner, Iowa, in 1968, where she was the administrator of Hillcrest Nursing Home for more than 10 years. Following Dan’s retirement they moved to Bentonville, Arizona, and subsequently to Sun City Phoenix.

Jo holds a special place in the hearts and minds of all who knew her. To know her was to cherish her as a best friend. She was a tennis player, swimmer, golfer, Sunday school teacher and Brownie leader.

According to her family, she was the world’s best potato salad maker.

Jo and Dan now hold a permanent, loving bond hand-in-hand through eternity with their dog, Buffy.