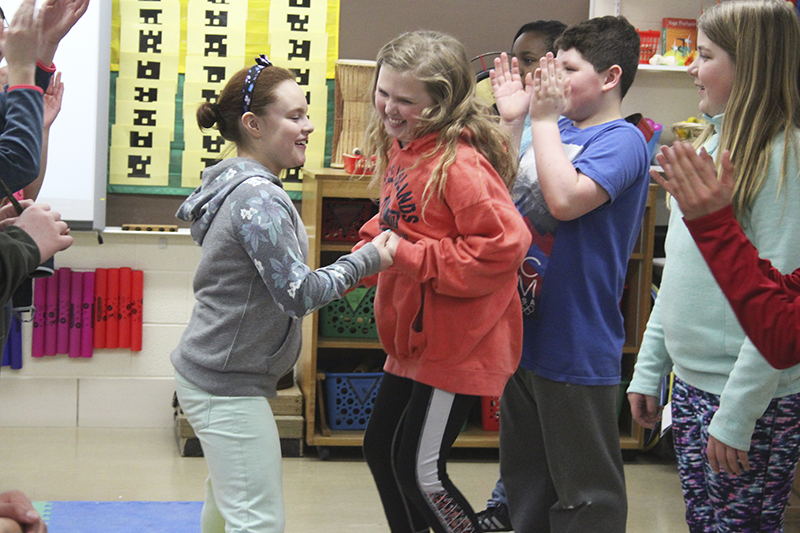 Lakeview Elementary School music students are putting the “do” in “do-si-do” as they prepare for a folk-dancing evening with their parents in April.

Lakeview music teacher Brooke May said folk dancing is one of many movement-based activities music teachers use to actively connect musical concepts.

She connects music to movement in other ways: She will beat on a drum, and students will connect a specific movement to a specific type of strike or rhythm. Her classes play a lot of circle games — the same concept as games like “Duck, Duck, Goose,” but with singing, May said.

“We always look for ways that we can engage our families and parents and students in activities here in the school that might be different and unique,” Lakeview Principal Nick Sofio said. This year will be the first time students have learned folk-dancing in the classroom and the first year for the folk-dancing event. It’s also May’s first year teaching. 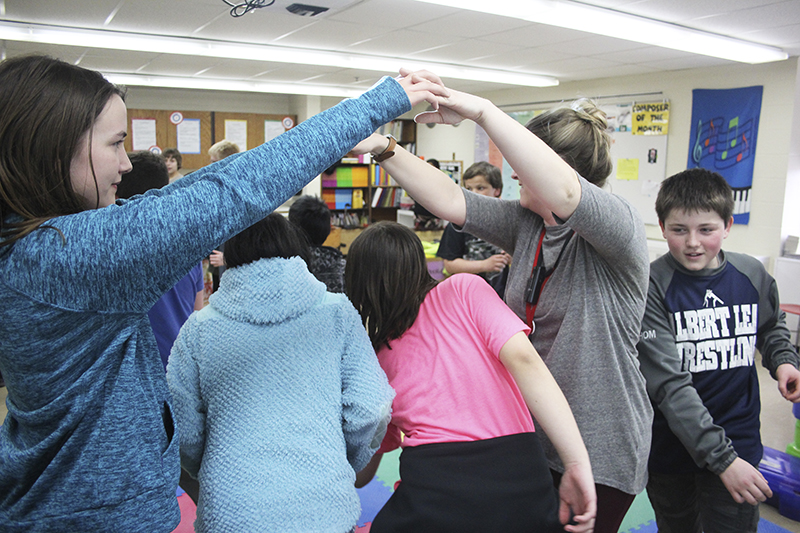 After “peeling the banana,” a student rounds the corner and prepares to move underneath the bridge with his folk-dancing partner. Sarah Kocher/Albert Lea Tribune

“Obviously, as a new teacher, I have all these things I want to try out on my students,” May said. With the folk-dancing night, that idea is incorporating parents into their child’s music education one step further than attending music performances. After all, preparing for performances is only a portion of what students are doing in the classroom, she said.

Currently, the concepts students are exploring through folk dance are rhythm, steady beat, melodic concepts and singing voice. For the younger group, they’re preparing the concept of “do,” working on keeping steady beats and quarter- and eighth-note rhythms. The older three grades are working on the “lo-so” and “lo-la” intervals, syncopation and sixteenth-note rhythms.

May said these concepts haven’t necessarily been labeled for the students, as they are in the introductory phase. Students learn in different ways, and dancing is another way to make those connections, May said.

For fifth-grader Corbin Pathammavong, the students are making connections in more than one way.

“I think it’s fun learning those dances because, like, because we’re actually, like, more up and moving a lot,” fifth grader Maggie Johnson said.

Pathammavong said it reminded him of show choir, which his middle school sister has been telling him about.

All three said they are looking forward to the folk-dancing night. May said the younger group is also getting geared up.

She said she hopes to have the family folk-dancing night again in future years.

“Brooke has, you know, she’s had, she’s put together a lot of great things for our kids,” Sofio said. “… She’s put her own mark on what music is going to be at Lakeview, and the kids are excited for music … in different ways than they were before, and it’s just been fun to watch the kids learn and grow this year in some different avenues than they have in the past.”