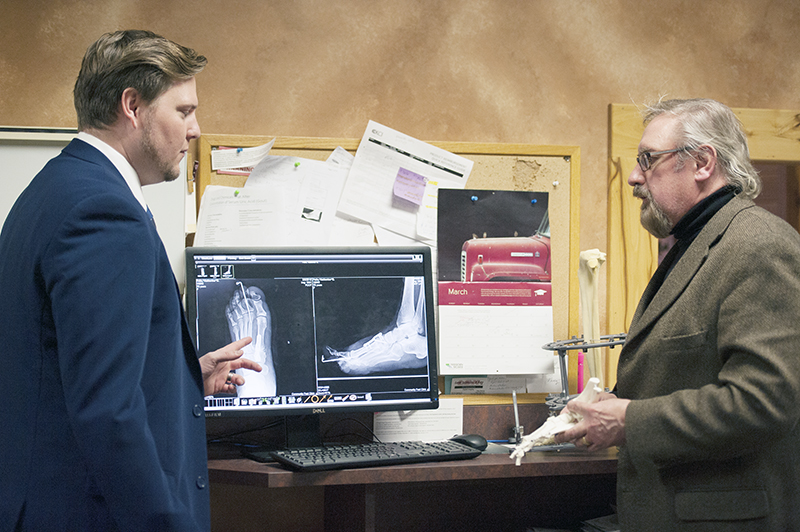 The Albert Lea Community Foot Clinic specializes in many different treatments prcedures with the foot. The clinic treats all ages, from infants to the elderly. Tyler Julson/Albert Lea Tribune

For nearly 30 years, Dr. John Enger has practiced podiatry in Albert Lea. After opening his private practice in July 1988 on Main Street, Enger has since moved to a new location twice and added another doctor to the team, Dr. Travis Klatt.

Enger went to college at the University of Minnesota, and from there he went to Des Moines University for medical school, before heading to the San Francisco area to complete his residency training. He would then move to Chicago for one more year of training before settling in Albert Lea.

Enger spent two years at his location on Main Street before moving to Health Reach on South Broadway. Then, in February of 2002, the Community Foot Clinic moved into a newly constructed location at 904 Plaza Street, where it has remained ever since. 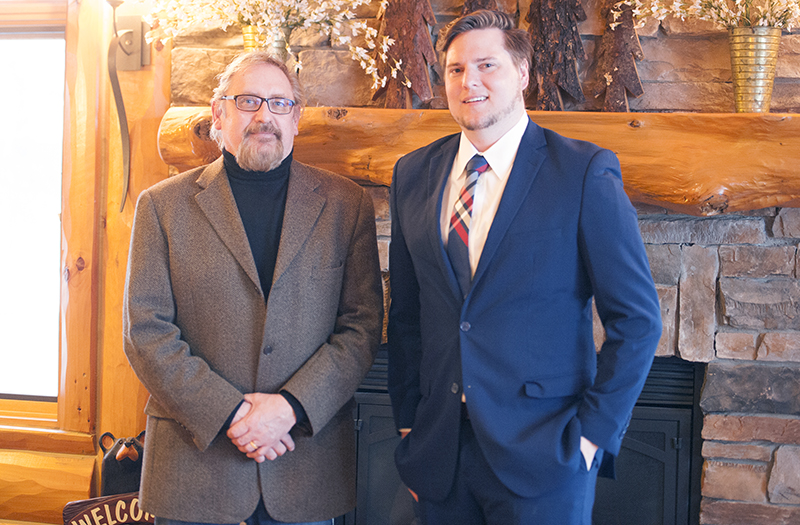 Klatt joined the team over seven months ago in August. Klatt, who grew up in Albert Lea, attended college at Drake University in Des Moines, where he also played football for five years. He then moved on to medical school at Des Moines University, followed by his residency training in Loma Linda, California.

Although both of them spent many years training to become experts in foot care, their reasonings for doing so are quite different.

“The thing that started me out in foot care is I wanted to do something in sports medicine,” Enger said. “My experience in high school, I played football, basketball, baseball, track and volleyball, so five sports in high school, then football and basketball in college. Having injuries myself, I wanted to do something that was based with sports medicine, and podiatry fit that niche for me.”

Klatt started out in pharmacy school during his pre-med schooling, but ultimately decided that wasn’t the right fit for him. He then took some time to shadow different doctors in many different specialties before deciding on podiatry. 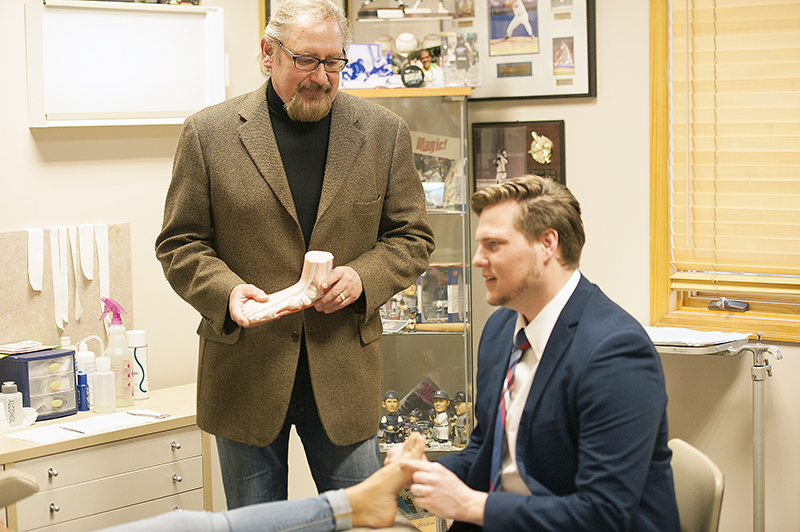 The clinic has been at its current location since February of 2002. It had previously been a part of the Health Reach Center on South Broadway. Tyler Julson/Albert Lea Tribune

“There were a few things that I liked specifically about podiatry,” Klatt said. “A lot of it was you can work in a clinic setting like this or you can be in a hospital setting. You can treat babies all the way up to 105-year-olds and everyone in between.”

“Patients will say to us all the time, ‘if your foot hurts, you hurt all over,’” Enger said. “That’s a common thing that we hear, and it’s true. If your feet hurt, your ankles can hurt, and it goes all the way up, your legs, your knees, your hips, your back, it just makes for a bad experience in your daily living. So in that sense, we don’t just treat feet, we treat the whole body.”

Enger chose to come to Albert Lea after being pursued by another podiatrist in town, Dr. Loring Stead. He said Albert Lea was the right fit for him because his wife was from Des Moines and he was from the Alexandria area so it was right between both of their families. He said after taking a walk around town, seeing the lake and seeing how busy Stead’s clinic was, he decided to take a chance and stay.

Klatt said one of the biggest factors that made him decide to return to Albert Lea was to be around his family.

“After being away for so many years, it just made me realize how much I wanted to be back with my family,” Klatt said. “I grew up here, I know a lot of people here. My wife and I thought this was the right fit for us. The people here are nice and it’s just home.”

Both doctors enjoy what they do and where they do it, but that doesn’t mean the practice doesn’t come without its challenges.

Enger said the hardest part about his job is keeping up with all of changes that occur in the health care industry.

“From the time I started until now, everything has changed so much. Insurance has changed, the computer knowledge that you have to have has increased, and the time commitment we give to our notes and charting. Medicine is dynamic, it’s always changing. Every year there’s new rules and new policies for us to follow. The most challenging thing is keeping up with modern medicine and the hours it takes to do that.”

Klatt echoed Enger’s statements about the fluidity of the medical field, adding that even in the short time he has been studying and practicing podiatry, there have already been several changes to the way he had done things in the past.

However, with all of the challenges that come with the profession, there aren’t enough to outweigh the positives that both doctors said they take away from being able to help their patients.

“One of the biggest compliments you can get probably anywhere, but especially in our profession, is when you get a referral from somebody,” Klatt said. “Even if someone didn’t tell you themselves, they were confident enough in what you did for them that they recommended you to somebody they know.

“When you see that you got a referral from someone you know, it’s like ‘Wow, they trusted me enough to tell their friends and family that this person was a high quality physician. That’s really rewarding.”