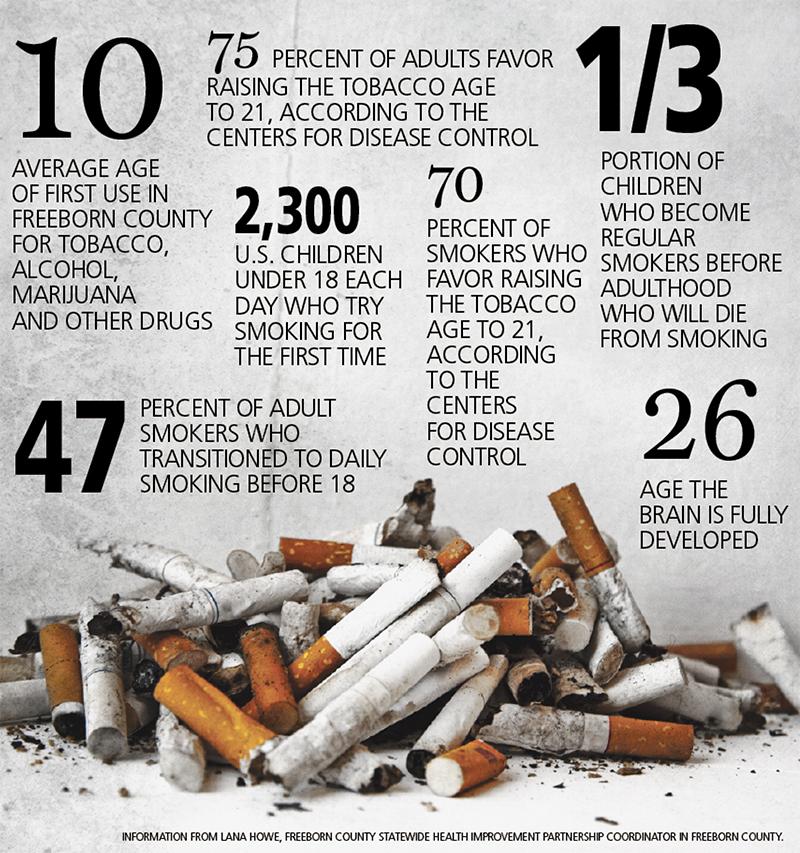 The Minnesota Legislature is debating raising the minimum tobacco sales age to 21, a change local health advocates said is needed.

Blue Zones Project Organization Lead Ellen Kehr said raising the minimum tobacco sales age could further reduce tobacco use rates in the state. Because of higher taxes on tobacco products, she said the tobacco use rate in Minnesota has dropped from 19 to 17 percent.

To Kehr, increasing the minimum tobacco sales age helps address tobacco addiction because an estimated 80 percent of smokers begin using before they turn 21.

“That’s a huge number, and we really need to do better for our young people,” she said.

Local lawmakers said they would evaluate the proposal.

“As a former teacher, I always wanted to see my students grow up living healthy lives and making smart choices,” said District 27A Rep. Peggy Bennett, R-Albert Lea. “Tobacco 21 is an interesting proposal that was recently introduced in the Legislature. I know a handful of other states have raised their tobacco age to 21.”

Bennett said she wants to see information on whether the law change will prevent later tobacco addiction.

“It is very important to make sure that legislation we pass will accomplish what it’s (intended) to do,” she said. “If the data from these other states shows that changing the age to 21 prevents tobacco addiction later in life, I will be glad to support this bill.”

He said he would have “an open mind” on the proposal.

“Though very little data about smoking is regularly collected for our kids under the age of 12, we have witnessed the peak for first trying to smoke appear to be in the sixth and seventh grades — or between the ages of 11 and 13 — with a considerable number starting even earlier.

“Our average age of onset here in Freeborn County is the age of 10 years for tobacco, alcohol, marijuana and other drugs.”

Howe said early exposure and nicotine addiction “can negatively impact brain development and have big implications for future tobacco use and smoking-related harms.”

“Just the thought of our brains not being fully developed until the age of 26 makes me cringe, knowing that the drug of nicotine and other harmful chemicals we hear of in products — cigarettes, e-cigarettes, vaping, e-juices, etc. — and knowing these chemicals are consumed at such a young age, let alone any age, frightens me.

“Most youth that have tried tobacco products don’t even know the extended list of ingredients in the products they are using,” she said.

Howe cited a Centers for Disease Control and Prevention study that showed 75 percent of adults favored raising the tobacco age to 21, including 70 percent of current smokers and 65 percent of people ages 18 to 24.

Though increasing the minimum tobacco sales age will likely not eliminate underage tobacco use, the plan would make it harder, she said.

Howe said evidence shows smoking cigarettes can be a first step toward abusing other substances.

“Stopping or delaying that first step will reduce the risk that kids will progress to using other harmful substances,” she said. “This is what stands out above all to me, the fact that we can delay the first step, that we as a community can create an ordinance and policy to make these products harder to get in the hands of our children, out of the hands of individuals that don’t understand or know the dangers associated with use, the negative health outcomes that can lead to early death.

“These are the reasons we continue to focus efforts around policy systems and environmental changes through the work that we do.”

Proposal would give aid for students in trade classes