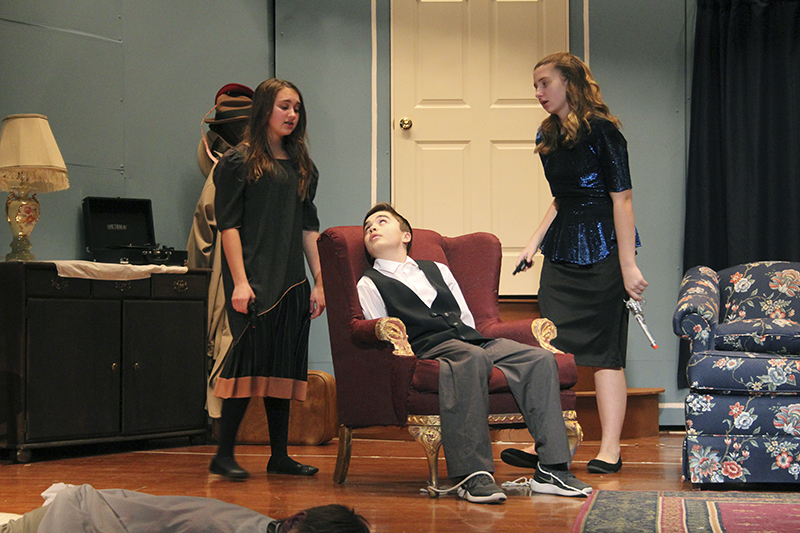 Timothy Chalmers, center, said the actors in “And Then There Was One” have been working on their facial expressions during rehearsals. They run through the play Tuesday at a dress rehearsal. - Sarah Kocher/Albert Lea Tribune

After a series of more classic children’s stories, Southwest Middle School is mixing it up with this year’s spring play choice.

“This one kind of keeps you like, looking, like, ‘What’s gonna happen?’” seventh-grader Morgan Christian said. “‘Why is this person dead? What’s going on?’”

Christie’s novel is her favorite.

“I love murder mysteries,” Kuisle said. “It’s more fun to have them goof off and see who actually did it.”

In “And Then There Was One,” 10 people are invited to a mansion on a small island. Unaware of who the host is, they nonetheless arrive, only to be greeted by a mysterious recording and then the first body. The guests begin to disappear one by one, as do the chocolate soldiers on the mantelpiece. The characters rush to solve the murder.

Kuisle said the more serious nature of the script means the students have to get into a more serious mood to perform — but it also means they like to milk the comedic moments, she said. 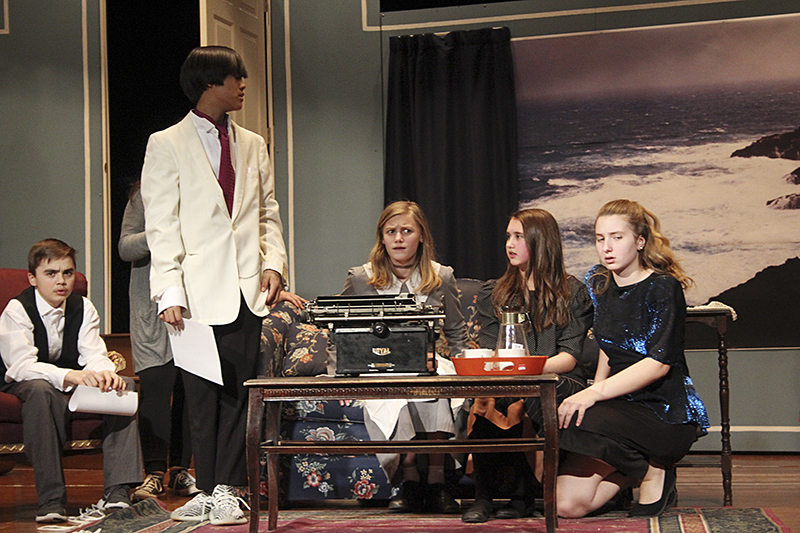 The cast of “And Then There Was One” tries to puzzle through the second of the play’s two mysteries during Tuesday’s dress rehearsal. – Sarah Kocher/Albert Lea Tribune

“They’re really good,” said Riley Johnston, an eighth-grader who volunteered to help out and became student director. “They put a lot of effort into it, and I think they enjoy being here.”

They’re going the extra mile, too.

“My students have gotten seriously into character,” Kuisle said.

Inspector Horatio Miles, played by Gavin Hanke, is supposed to be a stealthy character, so he has been sneaking into Kuisle’s classroom and, on one occasion, hid under her desk.

Hanke is a part of a cast of 10 on-stage actors and several student crew members, who in turn are a part of controlling what Christian said has been one of the challenges of the production: lights and sound. Over the course of the play, there are gunshots, an explosion, some musical tracks, a doorbell and a clock chime. The timing has to be just right.

Kuisle said the crew is working with two sound systems, which run simultaneously, and lights in two different spots.

“It’s a huge piece of communication between the backstage crew,” she said. “I’m putting a lot of dependence on them.”

This year’s performance also sets itself apart in that it has a single set, which remains stationary throughout the play.

Seventh-grader Kaitlyn Klocke said being a part of the play has been an enjoyable experience, and that the audience sees that.

“I hope they see, like, how much we’ve enjoyed being in this and how much it actually seems real,” Klocke said.

Kuisle said she hopes the audience sees how much has gone into the show — “just to see how hard the kids have worked and the details the kids have put into not only their characters, but the way they’re acting. Just those small things, not the overall pictures — just the little glances between characters, little facial expressions that they have to have on their face when they’re trying to give away a clue or not give away a clue.” 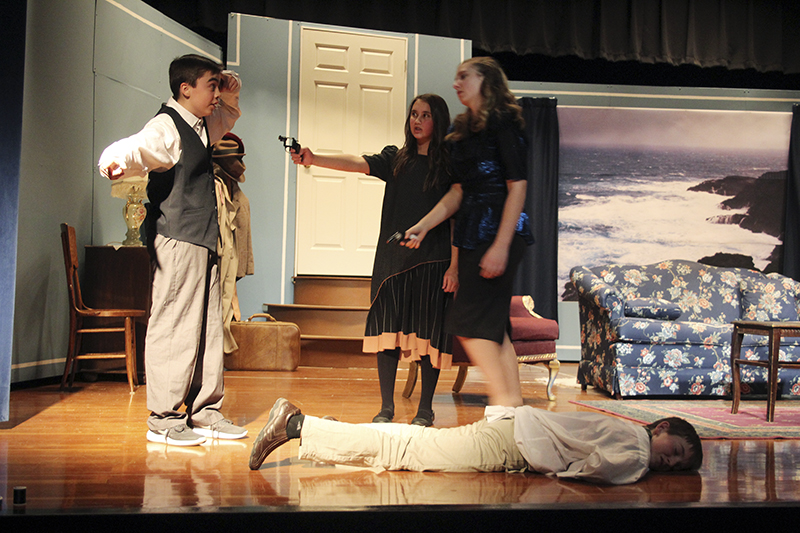 Southwest Middle School students run through a Tuesday dress rehearsal of “And Then There Was One,” a spoof off of an Agatha Christie novel. The murder mystery is a change of pace from previous choices, students and director said. – Sarah Kocher/Albert Lea Tribune