The dream street: Woman single-handedly revitalizes her own street in Kentucky

Houses on Chinn Avenue, which have been bought and renovated for the past 17 years, by Kathy Carter. Holly McClurkin/holly.mcclurkin@state-journal.com

Editor’s note: This is a reprint of a community and personal investment by a woman in Frankfort, Kentucky. Our hope is to be a catalyst to those able to copy the effort here on their street or in their neighborhood. It is a good way to improve one’s own environment and their community.  The Frankfort State Journal is an affiliate of this newspaper.

By Holly McClurkin, The State Journal

FRANKFORT, Kentucky — Ten colorful houses sit on Chinn Avenue in Frankfort, and over the past 17 years Kathy Carter has purchased and renovated all 10 to ensure the quality of her neighborhood.

Carter is proud to be from Quicksand, Kentucky, a small community in Breathitt County. After 10th grade, she moved to Louisville because her dad, who drove for Greyhound, was transferred. She graduated from duPont Manual High School. After attending college at Eastern Kentucky University, her aunt in Frankfort said she could move in with her. During that time, she met her husband, Bernie Carter, and has been in Frankfort since 1965. Eventually, the couple moved into his grandfather’s old house. 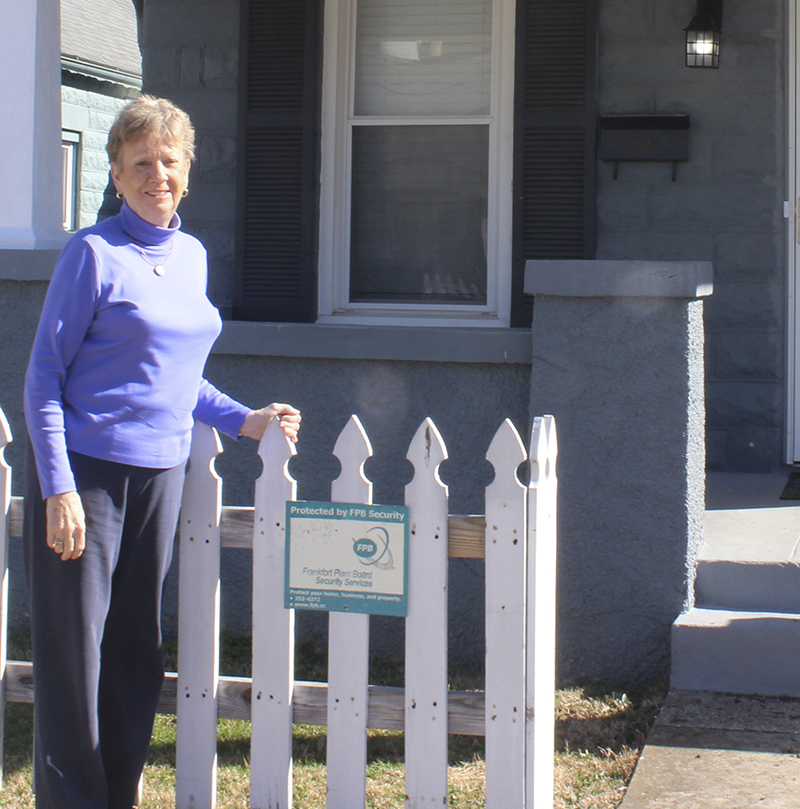 Kathy Carter stands in front of the last home she renovated on Chinn Avenue. Holly McClurkin/holly.mcclurkin@state-journal.com

“My husband’s grandfather built the house in 1915. The house is three bricks thick. The foundation is like 22 inches thick. You don’t find houses like that. I’ve insulated the walls, which means they are even thicker than three now,” Carter said.

After her husband died due to heart problems at the age of 86, Carter noticed that her neighborhood had started to go downhill. If it continued to decline, she would move. Around that time, however, a neighbor asked if Carter would like to buy her house. That prompted a thought: If she could buy all of the houses on her street and renovate them, she wouldn’t need to move. So, she approached the late Danny Garland, who worked at First Federal Bank, and asked for a loan.

En route to the bank Carter remembered some advice from her late husband: “Always ask for more than you want because it’s harder to ask for more later.”

Going into the bank, Carter did not expect much.

“I thought, I’m 55 years old. I’m a woman. I’m retired, and I’m single. Every kind of strike against a person,” Carter said.

Carter told Garland that she wanted to buy all 10 houses on her street. To her surprise, he wanted to know more: What did she plan on doing to the houses, and why did she desire to renovate the houses and offer them to rent?

“Because I don’t want to move. I want to control the neighborhood so that I can stay,” Carter recalled saying.

When she got home, she started up the street and stopped at the first house on the corner.

“I just knocked on her door, and said, ‘If you ever decide to sell your house, would you consider selling it to me?’” Carter recalled.

The woman inside responded, “‘Honey, I’m about to have knee surgery, and my daughter wants me to move in with her. I’ll sell it, but I won’t take any less than this,’” Carter recalled.

At that moment, Carter got in her car, drove back to the bank and said, “I just bought the first house.”

One by one, Carter began acquiring houses on her street. She approached every landlord on the street and offered appraised value for the houses, no negotiations.

Seventeen years later, she has completed her project, which required more than funding to pay for the renovations. In the midst of her project, Carter faced a court battle. The Frankfort Board of Ethics ruled that Carter had used her former position as city commissioner to receive benefits relating to the houses. In 2013, the Kentucky Court of Appeals overturned that ruling. In relation to the court battle and any other bumps along the way, Carter said keeping a positive attitude has been essential.

Since Carter’s renovations, the homes have increased in value. The last house she renovated was 701 Chinn Ave. In 2001, the property was valued at $35,000. The most recent assessment places the value at $45,600 The bank not only helped her improve her neighborhood but also helped improve the entire city of Frankfort, Carter said.

Frankfort City Manager Cindy Steinhauser said Carter’s work is a great example of neighborhood revitalization. It not only improves the built environment, but the social environment. Carter has created opportunities for neighbors to engage.

“What Kathy has done has really created a model for how you can strengthen a neighborhood building-by-building, neighborhood-by-neighborhood to really improve the community. Her investment is so important because it shows others that it can be done,” Steinhauser said.

Because she now “owns the street,” Carter said, she can ensure she has good neighbors and can get to know each of her neighbors.

“I’ve had two deputy sheriffs, a city policeman, a state policeman, two state representatives. I’ve had an assistant to the speaker of the House at the state legislature, people that have worked at the history center, retirement system. I have a lady right now who works at dispatch for 911, so really quality people,” Carter said.

In her 17 years of renting homes, she’s only had to evict one tenant. Carter says she’s serious about ensuring those in her houses are good tenants and neighbors.

When a house becomes available on her street, she notifies her tenants. If the tenant would prefer to live in the available house, she gives them the choice. If not, she tells them they’ll receive $200 for a referral.

Iva Bingham, one of Carter’s tenants, said Carter does all she can to help her neighbors. The neighborhood has become a family.

“I love it here. It’s nice and quiet. If anything happens, Kathy is right on it. She takes care of it as soon as she can. It’s peaceful,” Bingham said.

The tenants enjoy living on the quiet, clean street. She has a couple of tenants who have been in the homes for over nine years.

“When someone moves, they move because they have bought a house or are moving out of town. They have never moved because they didn’t like it, or they have found something better,” Carter said.

Every time a new tenant moves in, Carter sends an email to everyone on the street, telling them to welcome their new neighbor.

“When they come out and meet someone, they’ll say, ‘I live in the blue house or I live in the purple house’ or something like that,” Carter said.

Before starting the project, Carter had no training or experience. She said Bobby Hager, her “construction guy,” has helped a lot.

One of the first improvements she hoped to make to the houses was moving the kitchens away from the back of the houses. Now all of the bedrooms are in the back. She also added walk-in closets to all of the houses.

People tell Carter that the colorful houses remind them of Florida, California or South Carolina. Every spring, she takes care of any updates the houses need, such as a fresh coat of paint on the fences. She ensures yards around each house are well-maintained, too.

But she also takes care of her tenants.

“At Christmas, I treat all of my tenants out to dinner, and I let them pick the place to eat. It’s my way of saying, ‘Thank you for taking care of my houses,’” Carter said.

Her workers are also invited to the dinner. Carter wants all of her tenants to know the workers, so they will feel comfortable when the workers perform repairs. They now know one another by first names.

“When somebody moves, it’s sort of sad because you’ve gotten to know them and they leave, but you’re happy for them because they bought a house or they’ve moved to another town,” Carter said.

But there’s more than family that holds the neighborhood together. There’s history, too. Parts of her house are composed of parts from the towering structure located a short distance away.

“The porch posts, the balusters, the threshold and the window sills on the outside, those are stone. They came from the new Capitol,” Carter said. “When the new Capitol was built, they had excess stone. My husband’s grandfather purchased those, and those are in here in the house. That’s part of the history of Frankfort.”

Does she plan to sell any of the houses anytime soon? It’s not likely. Carter wants to keep her home in the family.

“I’ve lived here since 1972. I know the history of the house. I know how stable it is. I know how good it is, and over time I’ve put in new plumbing and new everything. I couldn’t get a house like this anywhere,” Carter said.

Meanwhile, the adventure of renovating an entire street of houses isn’t the only one Carter enjoys. She’s a self-described adventurer. Carter has been dog-sledding and bird hunting, flown a T-6 Texan training plane and parachuted from 10,000 feet.

There’s a reason for her adventurous attitude.

“My husband had passed away, and my mother was in the nursing home. I asked her one day, ‘Mother, if you had your life to do over again, what would you do different,’” Carter recalled.

At that moment, Carter resolved never to long for some uncompleted task in old age.

Carter, sometimes, cannot believe she finished the project. Occasionally, she has to pinch herself and say, “Did I really do this?”