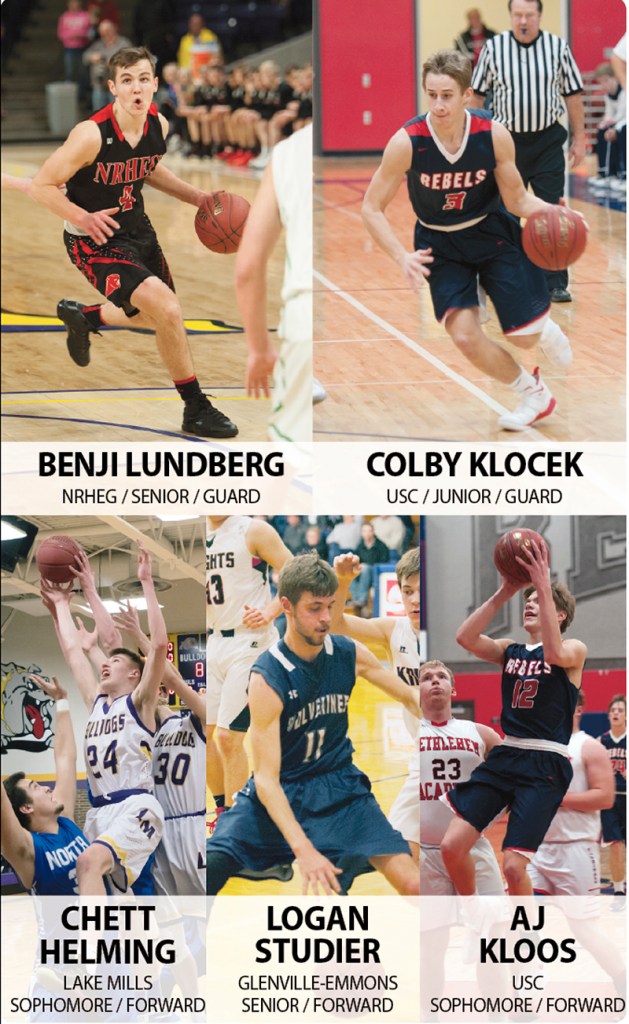 Lundberg was a force on the court this season for the Panthers, leading not only his team, but the Tribune’s entire coverage area in points per game with 18.8, nearly three points ahead of the second-place finisher. He also recorded his 1,000th point this season and was named for the All-Conference team for the second consecutive year. Lundberg also led the area in assists per game with 4.8.

NRHEG lost in the second round of the Section 2AA tournament by just four points to Maple River. Lundberg scored 31 of the Panthers’ 61 points; he will be a tough spot to replace as the Panthers try and rebuild for next season.

Klocek was a bright spot for the Rebels during a year in which they struggled on the court. Klocek led the team and was second in the area in points per game with 16.

The Rebels went 9-17 this season, with many of those wins fueled by the play of Klocek. They were defeated 52-48 in the first round of the Section 2A tournament by Truman/Martin-Luther/Granada-Huntley-East Chain.

One of two sophomores to make the All-Area team, Helming led the Bulldogs in points, rebounds, steals and blocked shots. He managed an impressive 14.7 points per game, while also pulling in seven boards per game. He also shot 45 percent from the field and 73 percent from the free-throw line.

Helming scored his career high in points in a game with 24 against Central Springs. He was named to the Top of Iowa West All-Conference second team as just a sophomore.

The Bulldogs went 9-14 this season with one postseason win, before getting beat by Forest City in the next round. Helming is sure to be a big player for the Bulldogs in his remaining years.

As a senior, Studier led the Wolverines in points per game with 14. He also pulled in 154 total rebounds and shot 40 percent from the field. His impressive statline led to him being named the team’s Offensive Player of the Year.

The Wolverines struggled to get wins this season, with their only win coming in December over Lanesboro. They lost in the first round of the Section 1A tournament to Fillmore Central, 76-52.

Studier will be sorely missed as Glenville-Emmons attempts to fill his shoes next year.

The second Rebel named to the All-Area Team, Kloos makes United South Central the only team with multiple players named to the first team. He is also the second sophomore to be named to the team.

Kloos was second on the team in both points scored and rebounding, with 14.5 points per game and seven rebounds per game.

With both Kloos and Klocek returning to the Rebels squad next season, the future is looking bright for the United South Central basketball program.

Dahlum recorded 12.6 points per game as just a sophomore for the Wolverines. He was also named the team MVP and most improved player.

Steele was the go-to guy for the Knights in 2018. He was the team’s leading scorer and rebounder with 12 points per game and seven rebounds per game.

Agrimson was a solid part of the Panthers’ successful 2018 season. He scored 11.7 points per game and grabbed 5.5 rebounds per game.

Scherff was a strong player on a struggling Tigers team. He scored 9.5 points per game and pulled in six rebounds per game.

Jaspers managed 9.7 points per game and four rebounds per game during his senior season.