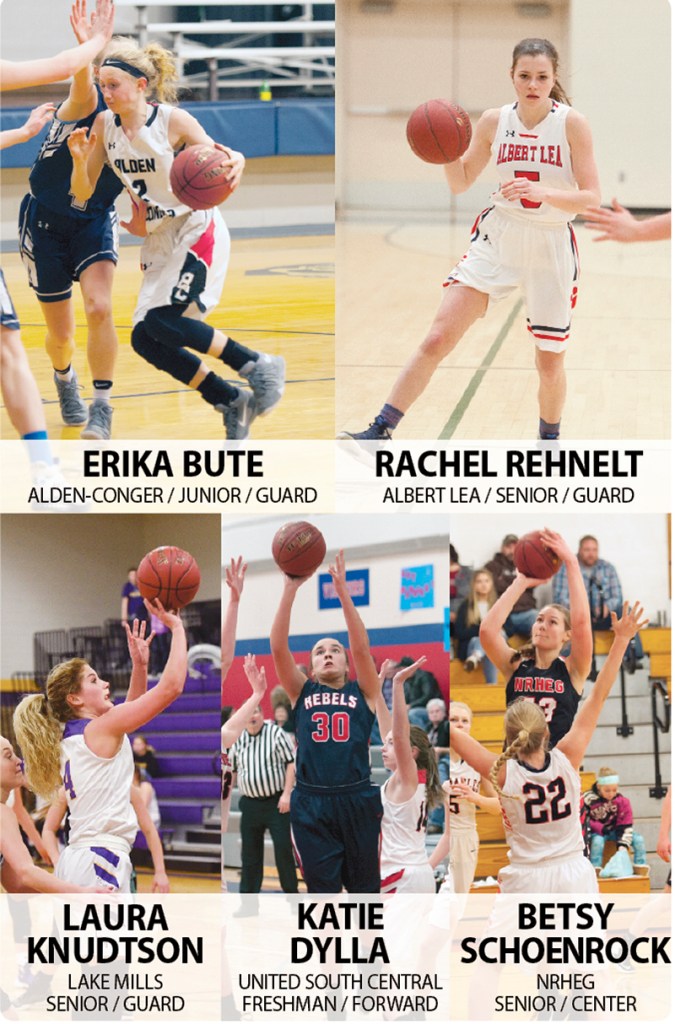 Bute led the Knights in multiple stat categories. She contributed a whopping 18 points per game, which was also the second-most within the Tribune’s coverage area. Bute pulled in 7.2 rebounds per game, dished 4.2 assists and had 3.5 steals.

She was also a high percentage free-throw shooter, making just over 70 percent of her shots from the line. Her assist to turnover ratio was an impressive 1.53.

Alden-Conger ended its season with a 12-14 record after an overtime loss to Mountain Lake Area. However, the Knights lose just one senior from the team — meaning Bute, as well as a few other helpful pieces, will be back to make a run at the section crown next season.

Rehnelt was a rock-solid senior leader for the Tigers in the 2017-18 season. She averaged 11.5 points per game, while also grabbing 4.6 rebounds and giving out 3.4 assists per game.

She became the eighth player in Albert Lea girls’ basketball history to reach the 1,000-point milestone early in the season.

The Tigers were eliminated in the first round of the section playoffs by Faribault, bringing their season to an end with a 4-23 record. Rehnelt was a big part of the foundation laid down for the future of the program and undoubtedly helped set the program on the right track.

Before the start of this season, Knudtson was already cemented as one of the best girls’ basketball players in Lake Mills history. Throughout her senior year she did nothing but add to her already impressive resume.

Knudtson had a season statline of 13.7 points, 2.7 rebounds, 3.4 assists and 2.1 steals per game. She also finished her career as a four-time All-Conference selection; and the school’s all-time leader in points, assists, three-pointers made and attempted, and second in steals.

The Bulldogs went 8-13 this season with a loss to St. Ansgar in the opening round of the regional tournament. Knudtson will surely be missed as the team attempts to fill her shoes next season.

As the only freshman to make the first team, Dylla made a big splash this season for the Rebels. Dylla led the team in points per game with 10 and rebounds per game with eight, nearly  averaging a double-double in just her freshman year.

The Rebels finished 3-21 this season, but did pick up a win in the section playoffs over Madelia before being eliminated by St. Clair in the second round. With Dylla on the team, the Rebels should be able to improve immensely over the coming seasons.

Schoenrock was a force to be reckoned with all season long for the Panthers. Almost no team the Panthers matched up against had an answer for Schoenrock’s presence in the post.

She not only led her team in points, rebounds and blocks, she also led the coverage area in those three categories. Her statline read as 23 points, 13.2 rebounds and 4.9 blocks per game.

The Panthers finished the season with a second-round exit from the section tournament at the hands of Blue Earth Area and a 17-10 record.

Schoenrock will be a big loss for a NRHEG team that is losing three other seniors. She will continue her basketball career at Gustavus Adolphus College in the fall.

Theusch finished an impressive freshman season, averaging 16.2 points, 7.2 rebounds, two assists and three steals per game. Next season is looking bright for the Knights, with both Theusch and Bute returning to the team.

Christopherson averaged 10.1 points, 3.4 rebounds, two assists and 1.7 steals per game during her junior season with the Panthers.

Hopperstad led the Vikings in many statistical categories in 2017-18. She averaged 7.3 points, 4.1 rebounds, 1.4 assists and 1.8 steals per game. Hopperstad was also named team MVP and was an honorable mention on the Top of Iowa All-Conference team.

Skarstad is one of the reasons why the future of the girls’ basketball program in Albert Lea is on the rise. She averaged 7.1 points, 5.6 rebounds, 1.1 assists and 1.3 steals per game.

Kessler averaged 8.1 points, 4.2 rebounds, 1.7 assists and 1.5 steals per game during her senior year for the Bulldogs. She also boasted a 40 percent success rate from the three-point line.