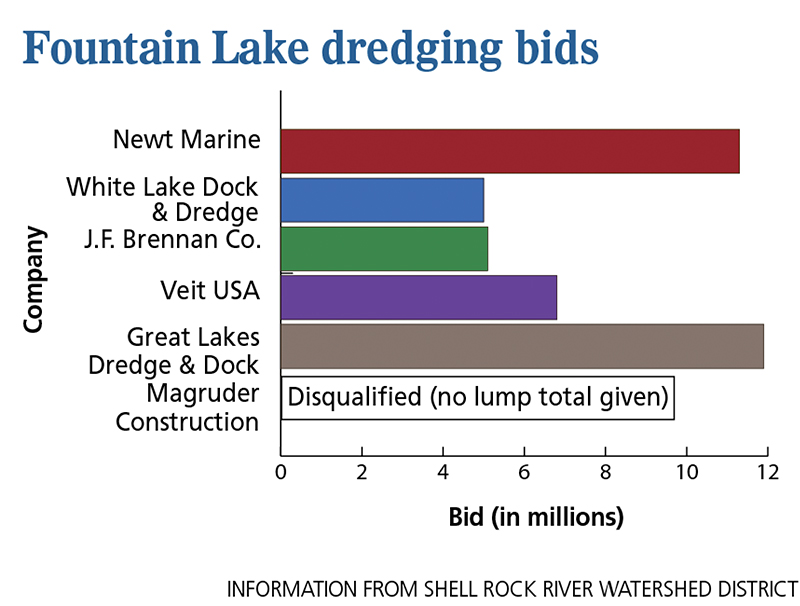 The Shell Rock River Watershed District announced taking another step in the pre-dredge process at its back-to-back monthly and annual meetings Thursday.

Andy Henschel, Watershed District director of field operations and interim administrator, said the district received six bids for the dredge project on Fountain Lake. Due to a disqualification, they will evaluate five. The five remaining are being reviewed by an outside company based on the bid process’s pass-fail criteria, after which they will be submitted to managers, staff and the district’s best value committee. The best value committee will meet Tuesday to put together a proposal to rank the entities that submitted a bid process. It will then make a recommendation at a special board meeting held the last week of March, Henschel said.

The prices of the bids range from approximately $5 million to approximately $11.9 million. The disqualified bid was thrown out because the submitting company did not provide a lump sum.

Board treasurer Alan Bakken said the project fund’s current balance is $5.4 million, which comes from the half-cent sales tax, a watershed bond provided by county citizens and past savings from different budgets. The district can also draw on $3.8 million of $7.5 million provided by the state for the dredging project, Bakken said.

Bakken encouraged the best value committee to consider the process is planned to occur in three phases, and to consider a long-run plan considering all three phases for both cost and equipment.

“I think the success of the project depends on our, our revenue over the next four, five years and how the equipment is used that we have or whether we use some of the equipment or not,” Bakken said.

If the committee accepts a bid that does not used the equipment owned by the watershed, Bakken asked for a recommendation about what to do with the equipment long-term.

The Watershed District Board also passed a resolution that allows the district to apply for Minnesota GreenCorps, an AmeriCorps project that would ask the district to play host to a full-time staffer paid by the Minnesota Pollution Control Agency. The Watershed District would be responsible for providing an office space, computer, phone, mileage compensation and other necessary equipment for the volunteer to complete their job. Henschel said the district would be a host for roughly 11 months.

According to the MPCA, the GreenCorps staffer would be working to address statewide needs, aiming to help in areas including waste reduction, air pollution reduction, water quality improvement, increasing recycling and working with the community. “The thought for the district is we would use this staff person for green infrastructure improvements along with … community readiness and outreach,” Henschel said.

Henschel said the district has also had a conversation with the city of Albert Lea about sharing the individual, and the city has expressed potential interest.

At the annual meeting, the Shell Rock River Watershed District announced its rural and urban conservationists of the year.

The rural conservationist of the year title was awarded to the Freeborn Area Soil Health Team, which formed in March 2014 to facilitate local collaboration. The team is comprised of federal, state and county government conservationists.

“The Shell Rock River Watershed District admires the determination (and) tenacity of the team for making a difference in soil health,” board chairman Dan DeBoer said. “We also applaud the local farmers that volunteer their time and knowledge to help educate others.”

Laura Cunningham, former president of the Lakes Foundation, was recognized as the urban conservationist of the year.

“Laura is a natural-born leader and a passionate advocate of our lakes,” DeBoer said.

• The board approved replacement of lost equipment from a 2016 flooding event. The district will use money from a Federal Emergency Management Agency grant to replace several sensors and a few other equipment pieces and to fix some areas of the Wedge Creek restoration project that were blown out during the flood. FEMA paid the district approximately $113,725, of which the state share was approximately $26,244.

• A consent agenda procedure was approved for future use at Shell Rock River Watershed District Board meetings. The consent agenda structure allows the board to group non-discussion agenda items together for one vote that would approve or dismiss all items at once. This process could apply to items like minutes approval, authorizing a chair member to act on behalf of the board of managers to sign certain documents, items discussed previously by board managers and “non-controversial items.” The consent agenda process could not be used for contracts or controversial items. The district will provide a policy procedure, which will be presented to board managers at the April board meeting.

• The board approved annual dues paid to the Minnesota Association of Watershed Districts, which a memo from MAWD said went up noticeably due to a change in the formula used to calculate dues. The board’s 2018 dues were $4,589, up from approximately $2,600 in 2017. Henschel said MAWD hired a new full-time administrator and that may be a reason for the increase.