‘We can’t leave any stone unturned’ 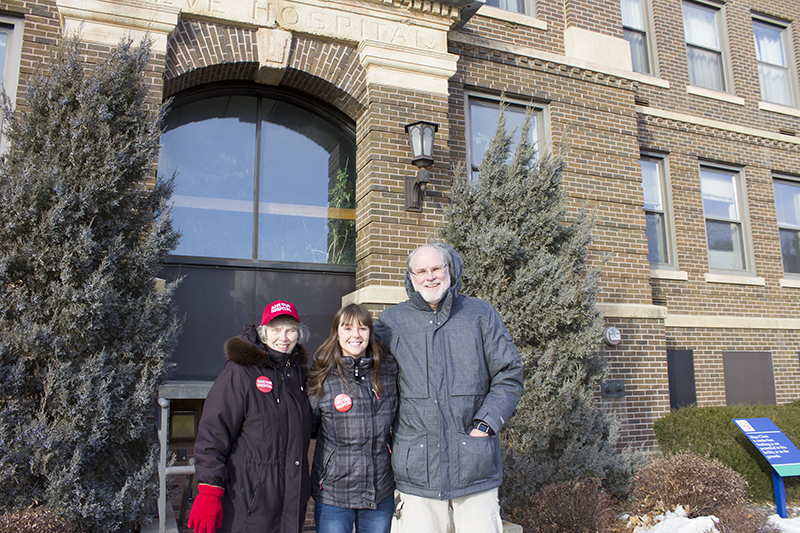 On June 12, 2017, Mayo Clinic Health System in Albert Lea officials announced they would transition most inpatient services to Austin over the next three years.

Eight months later, Save Our Hospital remains, thanks to the efforts of local volunteers who continue to evaluate all options to reach the group’s goal.

“We can’t leave any stone unturned,” said Angie Hanson, Save Our Hospital local organizing subcommittee chairwoman. “We have to try every single avenue to try to keep those services here or get those services here in some manner, and if we don’t do that, then we’ve basically failed all of the members of Save Our Hospital and our community, if we leave some stone unturned.

“We have to make sure we are doing everything we can.”

To accomplish the organization’s goal, Hanson led efforts to organize rallies last summer and inform the community of the changes Mayo Clinic Health System is making. Albert Lea and Freeborn County have discussed forming a community health board, and the group has informed state and federal lawmakers of the transition and requested their assistance in changing the hospital system’s plans.

Hanson spoke of her concern about patients and their families needing to take the more than 20-mile trip to Mayo Clinic Health System in Austin in possibly adverse weather conditions because of the changes.

“There’s real danger for people to have to travel that far,” she said. 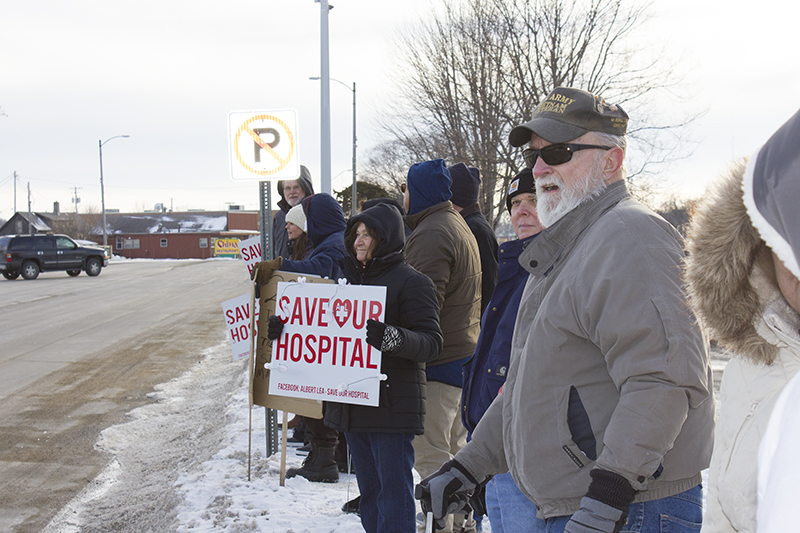 Save Our Hospital members gathered Jan. 31 on Bridge Avenue to call attention to their concerns regarding Mayo Clinic Health System’s plan to transition most inpatient services from Albert Lea to Austin. — Sam Wilmes/Albert Lea Tribune

Though Save Our Hospital members are open to having Mayo Clinic Health System provide inpatient services to the community, they plan to welcome another provider to Albert Lea if Mayo continues with its transition.

“If Mayo doesn’t want to keep their services, then we’ll look elsewhere to get those services,” Hanson said.

Jean Eaton, Save Our Hospital public relations chairwoman, said the transition is an economic impact issue. A small business owner, she said the transition effects many people and is part of a national issue regarding a lack of health care delivery options in rural areas.

Eaton has served as Albert Lea mayor and in other leadership positions.

Internal communications chairman Joel Erickson said though Mayo’s merging with Naeve Health Care in the 1990s went well, his opinion of the merger has since soured.

“They own the table of health care, and no one else can sit at the table except them,” he said.

“We own health care here in Albert Lea and Freeborn County, not Mayo,” he said.

Save Our Hospital is challenging Mayo’s statements that the Albert Lea hospital can no longer be profitable and cites the results of last year’s study health care consultant Quorum Health Resources LLC. compiled.

The company found if certain conditions were met, the hospital could be profitable.

Save Our Hospital takes issue with the hospital system’s plan to transition services farther away from medically underserved regions.

“It was bad to begin with, Erickson said. “Now they just made it worse.”

The organization has consistently stated its disagreement is with the hospital system’s administration, not the doctors or nurses who provide care.

“The Mayo Clinic is good at what they do, but they aren’t so good at rural health care,” Erickson said.

As of January, Save Our Hospital was evaluating hiring a consultant next month to guide them through the process, which the group has said would be a marathon. Despite possible difficulties, Hanson expressed confidence inpatient services would return to Albert Lea.

“We have the market; they’ll make money. It’ll be profitable. The only thing that is, that it will take time, because it will start with a clinic, then they’ll add.”

The group has consistently stated it is apolitical and diverse.

Hanson said Save Our Hospital’s biggest core value is respect.

“We can always say whatever we’re doing is above the line,” she said. “Mayo can’t say — they can say it’s not, but then they’re wrong. We have always been above the line. Yeah, we will challenge them, but we will stay above the line, always. And I think that’s awesome.”

The group remains confident it will change the course of health care delivery in Albert Lea and be an example of what community groups can do.

“We’re a grassroots community group that is going to make a difference — a huge difference,” Eaton said.