Weather continues to make up its mind on precipitation of choice 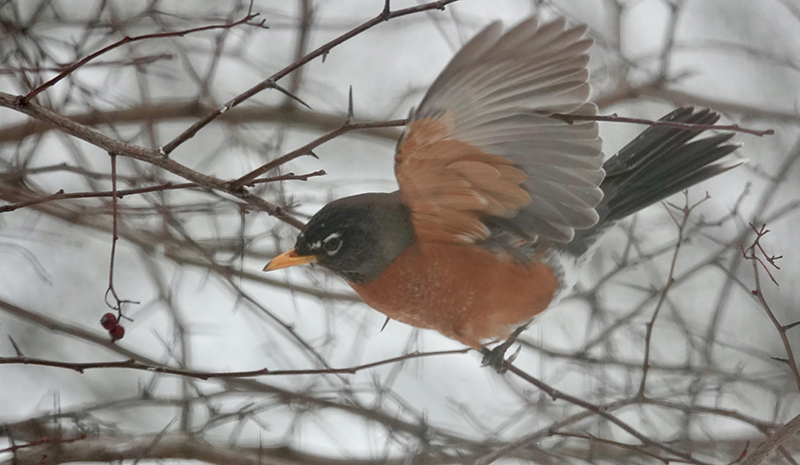 If there are no worms on the menu, you eat the berries of a hawthorn tree. - Al Batt/Albert Lea Tribune

“Everything is nearly copacetic. The winter has been as cold as a cast iron commode. I’m trying to eat healthy. I have a salad with lunch and dinner every day. It’s a good thing I love potato salad. Life is unfair. I filled my car with gas at Fuel’s Paradise. I pumped the gas and then I had to pay for it, too. I did all the work. Not long after that, I waited in the 10 items or fewer lane behind a man holding a box of Cheerios. What was he trying to pull? There were more than 10 Cheerios in that box. I guess nobody said that shopping was fair.”

I bunked where there were no horizons. There were trees instead. I saw a black-billed magpie outside Bagley. According to the Cornell Lab of Ornithology, one of the behaviors of magpies is the supposed “funeral.” When a magpie discovers a dead magpie, it calls loudly to attract other magpies. The gathering of noisy magpies may last for 10 to 15 minutes before the birds disperse. The sight of this beautiful bird caused me to listen to Rossini’s “The Thieving Magpie.”

I visited a friend’s place near Bagley where flying squirrels visit the feeders each night. I saw a dark morph rough-legged hawk near Eagle Lake. The dark plumage contrasted with the pale flight feathers, making for two-toned underwings. The lovely raptor appeared to be in black-and-white.

At home, I think I’m seeing more bald eagles this year than I’ve seen before. I watched as crows hectored a perched great horned owl. That owl was zygodactyl. That means that its feet have two forward-facing toes and two-backward facing toes. Most owls, woodpeckers and parrots have this arrangement. I heard a cheeseburger call made by black-capped chickadee during the snowstorm.

On March 5, I went outside and in a short period, I experienced snow, rain, corn snow, sleet, ice and strong winds. It was like being at a winter amusement park. All that was missing was 20-degree-below-zero temperatures. There was thundersnow. Thundersnow occurs when temperature and moisture conditions are just right — a mass of cold on top of warm air, plus moist air closer to the ground. Such conditions usually occur in late winter or early spring. Some consider it rare, but I’m no stranger to thundersnow.

Like an Ibsen play, winter is a great disturber. Yet the house sparrows chirp merrily in the snow.

“How can I tell if the robins I see have migrated in or they overwintered?“ The migrants are skittish — more flighty and noisy than the winter remainders. My mother said that a returning robin needed snow on its tail three times before it was truly spring.

“Does cold winter weather have an impact on insects?“ To a remarkably limited degree.

“How much can a bald eagle carry?” It could carry about 25 percent of its weight. My neighborhood bald eagles weigh 8 to 13 pounds.

Roger Batt of Algona asked if the email regarding the “Eagle Rebirth” story had any truth in it. A bald eagle doesn’t lose its beak or talons, unless it’s the result of an injury. Without talons for catching prey and a strong beak for tearing food, the raptor would die of starvation. An eagle hatches with both a beak and talons, which are composed of keratin similar to human fingernails. Eagles don’t pluck out their feathers. A bird’s feathers suffer regular wear and tear and need to be replaced (not all at once) in a molt. The average lifespan of a wild eagle is 20 to 30 years. The message of the email might be useful, but the information on eagles is nonsense.

“What is the wingspan of a turkey vulture and how does it compare to other big birds I might see?” The vulture’s wings stretch 6 feet. A bald eagle and a golden eagle have 6- to 7.5-foot wingspans. An American white pelican’s wings are 9 feet long and a great horned owl’s measure 4 to 5 feet.

“Is it pronounced loo-siz-im or loo-kiz-im?” Leucism describes a plumage aberration in which a bird’s normal pattern and color of plumage is discernable, but is pale and faded. The terms leucistic and leucism are derived from the prefix leuc-, the Latin variant of leuk, from the Greek leukos, meaning “white.” This prefix is pronounced with a hard C or K sound in both Latin and Greek. I pronounce leucistic as loo-kiss-tic and leucism as loo-kism.

“The wonders of nature are endless.“ — Walt Disney

“Life is not about having and getting. It’s about being and becoming.“ — Myrna Loy