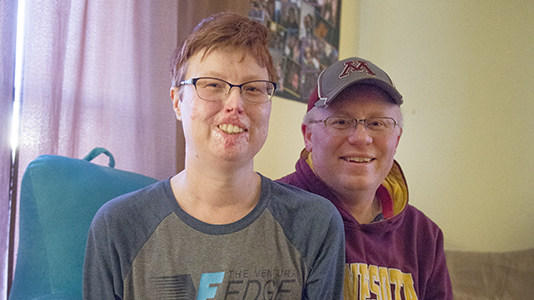 Kari and John Nesje have been married 18 years, with this last year being one of the toughest the couple has ever faced. Colleen Harrison/Albert Lea Tribune 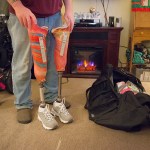 Kari Nesje currently has prosthetic arms and legs for her to learn how to use, which will be upgraded once she gets used to being upright and balancing again. Colleen Harrison/Albert Lea Tribune 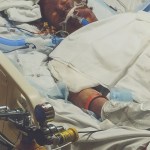 In january 2017, Kari Nesje Kari woke up with a fever and was on life support by the end of the day. Provided 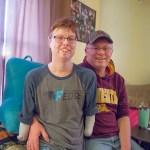 Kari and John Nesje have been married 18 years, with this last year being one of the toughest the couple has ever faced. Colleen Harrison/Albert Lea Tribune

During the early morning hours of Jan. 26, 2017, Kari Nesje woke up feeling sick.

Feeling feverish, she called off of work and tried to go back to bed. She woke up later with her hands and feet tingling and sore. Thinking she was just cold, she took a bath to warm up. When the tingling and soreness turned painful and only got worse, she decided to call 911.

After being taken to Mayo Clinic Health System in Albert Lea, Nesje passed out within 15 minutes of being at the hospital. She was airlifted to Rochester, where she would spend nine days at St. Marys. Nesje would later find out that the doctors and nurses who were with her in Albert Lea didn’t think she’d make it to Rochester.

“Her whole body was shut down,” said her husband, John Nesje.

John Nesje wouldn’t see his wife until she was out of surgery in Rochester — a surgery that was meant to keep Kari Nesje alive long enough for her doctors to figure out a plan of action.

Kari Nesje was placed on ECMO — a life support system — to keep her heart and other vital organs going while doctors worked to figure out how to treat her. She had 27 or 28 IVs with different antibiotics in them trying to fight off infection, and her doctors went through 48 units of blood trying to flush out any harmful bacteria in her bloodstream.

It would eventually be determined that Nesje was suffering from pneumococcal pneumonia — an infection caused by a type of bacteria that can invade not only the lungs, but also the bloodstream. The infection was worsened by the fact that Nesje didn’t have a spleen — it had been removed when she was younger.

John Nesje’s sister would bring the couple’s two daughters — Annie, 17, and Jessie, 13 — to see their mother. While the family waited for Kari Nesje to come out of her ECMO surgery, they’d be waiting to see if she’d be brain-dead or not. Annie Nesje thought her mother was dying when she saw how purple she was, and Jessie Nesje couldn’t bring herself to go into her mother’s hospital room her first day out in Rochester.

As Nesje lost circulation in her arms and legs while she was on life support, her limbs started turning black. Once doctors got the circulation going again in her limbs, Nesje’s skin started blistering as if she was being burned.

It would eventually be determined that her arms, legs and breasts would need to be amputated, and Nesje would move to Regions Hospital in Minneapolis and would stay there for five months for skin grafts. In early June 2017, Nesje was sent back to St. Marys for physical therapy before she’d finally return home to Alden later that month.

Nesje said from the point she passed out in Albert Lea, she remembers almost nothing until she was up in Minneapolis. She has a vague memory of her husband sneaking her ice chips while at St. Marys, and looking down at her black hands, but other than that has no recollection of her first hospital stay in Rochester.

Doctors told the Nesjes that the shock to the system from the virus has a 98 percent fatality rate, with Kari Nesje being in the 2 percent of survivors.

“I was just stubborn,” she said.

Now, Nesje, 39, is pain free. The only medication she takes is to calm her nerves when she goes to bed at night — otherwise her legs can get restless and keep her awake. She is seeing dermatologists and plastic surgeons, as she’ll eventually have reconstructive surgery for the portions of her lips and nose she lost.

Around September or October, Nesje stood up for the first time using prosthetics. She has straight leg prosthetics and hook arms at the moment, but has more advanced jointed prosthetics being made for her in Rochester. For now, the focus is on getting her strength and balance back with her current prosthetics, using a walker until she’s more comfortable. Leg sores have sidelined her prosthetic use at the moment, so Nesje is using a motorized chair to get around.

Nesje worked for Ventura Foods at the time of her hospitalization, but has had to quit since. She is on Social Security disability, but hopes to eventually be able to get another job.

Since Nesje’s return home, her friends, family and the surrounding community have come to her aid in full force. In upgrading the family’s bathroom and making a ramp entrance to the home, the Nesjes only had to pay for materials; the time and expertise in completing all of the house projects were donated. Benefits were held at both the Alden American Legion and in Nesje’s hometown of Morristown.

“I have no words to express how much it’s meant to us,” Kari Nesje said.

“You don’t realize how close communities get until something happens and everyone chips in.”

Kari Nesje’s sister-in-law and mother split time sitting with Nesje at home during the day, when her husband and daughters are at work and school. A home health nurse stops once a day to help Nesje with her bandages. Her brother got Nesje an Alexa from Amazon, which she uses to control the TV and answer her phone. She was given a stylus during one of her hospital stays that helps her use her cellphone.

Eventually, Nesje would like to be able to drive again, and said she plans to get back to 60 percent of what she was able to do before her hospital stays.

“We’ll have her up and running by the end of the year, I hope,” John Nesje said.

The Nesjes planned to have a celebration at the Alden Legion mid-January to celebrate how far Kari Nesje has come in the year since. She has stayed positive, and has kept her sense of humor, Nesje said. She refuses to feel sorry for herself.

“The way I look at it, that’s all I got left,” she said. “They took everything else.

18 – Years Kari and John Nesje have been married

9 – Days Kari Nesje spent at St. Marys in Rochester before being transferred to Regions Hospital in Minneapolis