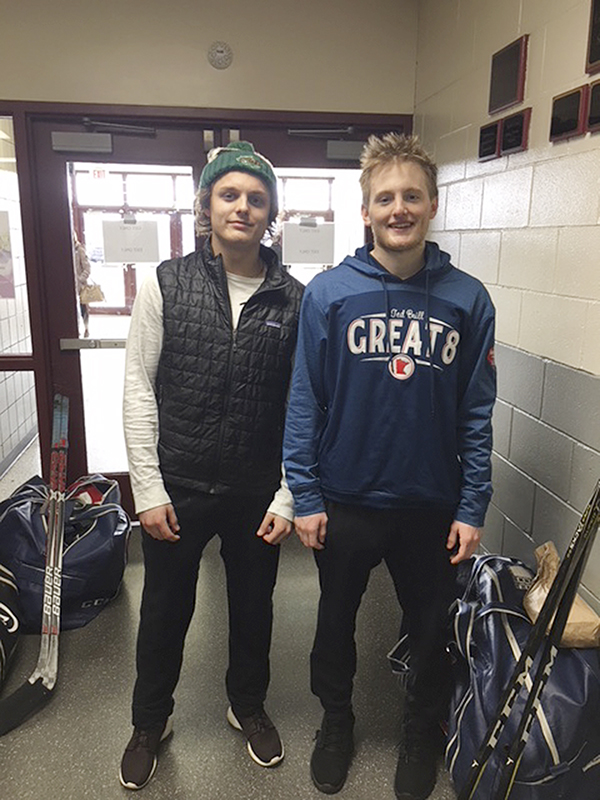 Albert Lea seniors Bergan Lundak and Michael Savelkoul were both selected to play in the Ted Brill Great 8 Tournament. Although the team went 0-4 in the tournament, Savelkoul was able to record one goal and one assist. - Provided

The tournament consists of eight teams made up of the state’s most elite hockey players. It was March 23-25 at the Doug Woog Arena in St. Paul.

Both Lundak and Savelkoul had stellar senior seasons playing for the Tigers in 2018.

Lundak led the Big Nine Conference in goals with 27. Combined with his 11 assists, he totaled 38 points.

Savelkoul led the Big Nine Conference with 34 assists. He also totaled 18 goals, giving him 52 points throughout the season.

Both were also named to the illusive 100-point club this season, which recognizes players who score more than 100 points during their high school career.

For over 30 years, the CCM High Performance Ted Brill Great 8 has provided the top high school players in Minnesota the opportunity to showcase their skills and abilities to coaches and scouts from junior, collegiate and professional teams.  The three-day tournament has expanded from two region teams in its inaugural season, to eight teams.

Organized by the Minnesota High School Hockey Coaches Association and Minnesota Hockey, the CCM High Performance Ted Brill Great 8 is designated as a national development program by USA Hockey and continues to play a vital role in player development and exposure in Minnesota.

The tournament consists of eight teams of the top high school players in Minnesota. Four teams are selected from senior players, and another four teams, referred to as HP 18’s, are determined from junior players born in 2000. The senior and HP 18 teams were formed according to paired high school sections (Sections 1 and 3, Sections 2 and 6, Sections 4 and 5, Sections 7 and 8).

Each high school coach has the ability to nominate players.  Following the nomination process, high school coaches voted on which players should represent their section. The selected teams, consisting of 20 players each, participated in three games at the CCM High Performance Ted Brill Great 8.