2 to 3 inches of additional snowfall could come today 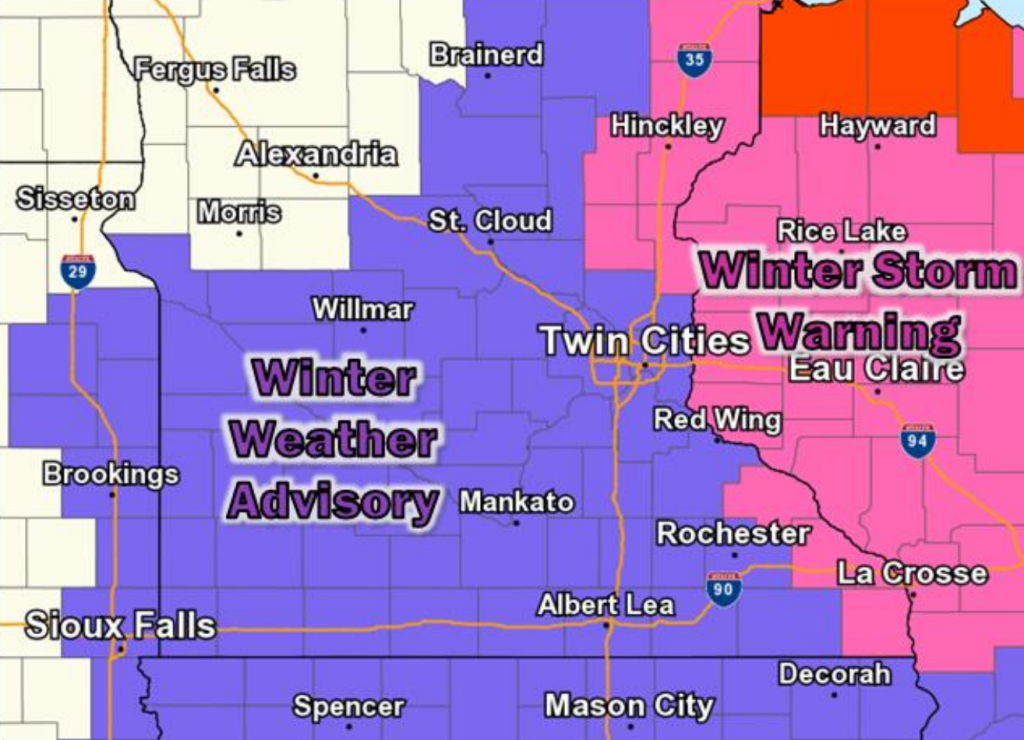 The blizzard warning has moved out of the Albert Lea area, and now a winter weather advisory remains, according to the National Weather Service. Provided

Light snow continues to fall this morning as a winter weather advisory continues for much of central and southern Minnesota today and into the evening.

According to the National Weather Service, 2 to 3 inches of additional snowfall could occur in the area today, and winds will continue to cause considerable blowing and drifting snow.

People should plan on slippery road conditions and reductions in visibility. As of 7:30 a.m. today, roads in Albert Lea and much of the surrounding area were listed as fully covered in ice and snow, according to the Minnesota Department of Transportation. Travel is not advised on roads in Alden and Wells, and roads in southwest Minnesota — including Interstate 90 — remain closed. Wind gusts of 20 to 30 mph will continue to cause blowing snow.

The storm continues as hundreds of flights were canceled Saturday at Minneapolis-St. Paul International Airport as the blizzard made it difficult to keep runways clear and planes deiced. Nearly 470 flights were canceled before one runway reopened shortly after 10 p.m., according to a spokesman. Blizzard conditions also forced the airport in South Dakota’s biggest city, Sioux Falls, to remain closed for a second straight day.

The Minnesota Twins home game against the Chicago White Sox was snowed out Saturday, marking the first back-to-back postponements of baseball games in the stadium’s nine seasons. Sunday’s game was also called off because of the storm, which by Saturday night had buried Minneapolis under more than 13 inches of snow (33 centimeters). The Yankees and Tigers were rained out Saturday in Detroit.

Authorities closed several highways in southwestern Minnesota, where no travel was advised, and driving conditions were difficult across the southern half of the state. The National Weather Service predicted that a large swath of southern Minnesota, including Minneapolis and St. Paul, could get up to 20 inches of snow (51 centimeters) by the time the storm blows through today.

“It’s a cool experience for me, the best Minneapolis experience,” Niko Heiligman, of Aachen, Germany, said as he braved the snow Saturday to take a walk along the Mississippi River in downtown Minneapolis. “I’m only here for the weekend, so I guess that’s how it goes. There’s snow and it’s cold. So it’s good.”