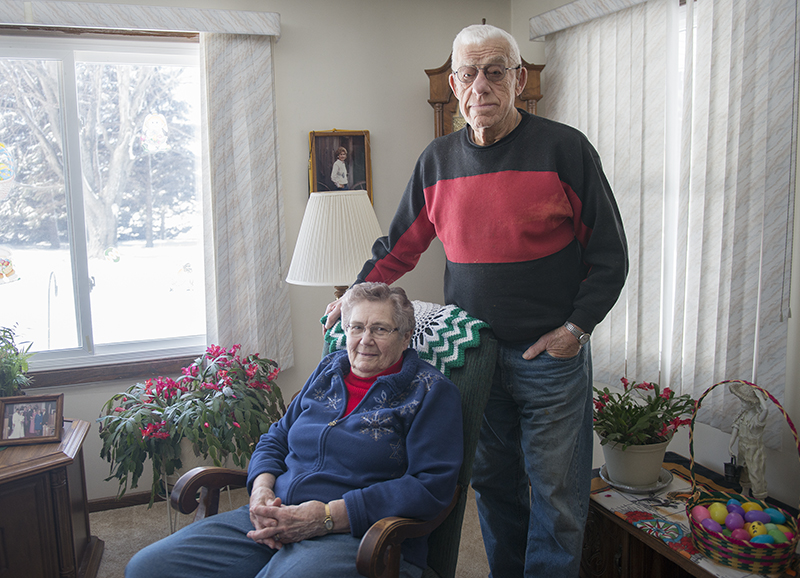 Louis and Phyllis Tomschin have shared their lives together, along with separate 30-year careers in the Albert Lea health care system. - Colleen Harrison/Albert Lea Tribune

Couple enjoyed how well patients, doctors knew each other

ALDEN — Husband and wife Louis and Phyllis Tomschin have shared their lives together, along with separate 30-year careers in the Albert Lea health care system.

Louis Tomschin worked as a boiler operator in Albert Lea hospitals from 1968 to 1998, while his wife was a lab technician at the Albert Lea Clinic from 1969 to 1998.

As a lab technician, she ran blood tests, drew blood and took cardiograms.

Prior to working in Albert Lea, the couple lived and worked in Sleepy Eye and New Ulm.

Phyllis Tomschin, 80, noticed similarities between her time as a health care professional in Sleepy Eye and Albert Lea.

“You knew just about everybody,” she said. “You got to know your patients here, too, though.”

Phyllis Tomschin said by knowing her patients, she was able to conduct her work better and said most patients were pleased with the services she provided. She still sometimes encounters former patients.

Tomschin said she needed to know her patients. She broke her neck in 2010 and was taken to the hospital by her daughter. The on-call doctor remembered her from her time at the clinic. He had her undergo a CAT scan because he knew she had arthritis.

Louis Tomschin, 87, spoke of the large amount of equipment a hospital has and the need to constantly change filters.

“It was fun doing that type of work,” he said.

“It was kind of interesting, kind of fun.”

Louis Tomschin sometimes arrived at the hospital by 3 a.m. to clean snow-covered parking lots.  He started with a small International truck and ended his career using a larger Bobcat vehicle.

Phyllis Tomschin graduated from the College of Medical Technology in the Twin Cities.

She said the biggest change she encountered while working in health care was the evolving nature of equipment, which now typically involves a machine.

Louis Tomschin remembered moving to the current hospital in the early-1970s. He recalled going to work that Friday morning and not leaving until Sunday morning to ensure the transition went smoothly. He said a humidifier malfunctioned shortly before surgery services began.

“That took care of Monday’s surgery,” he said. “I’ll never forget that.”

“It was quite a change from one thing from another.”

The couple said they think Mayo Clinic Health System’s transition of most inpatient services from Albert Lea to Austin is not a good plan.

“I have nothing against Austin,” Phyllis Tomschin said. “They’re fine. But why should we give up everything we’ve got and drive all of the way over there?”

Her husband said there is not enough room for birthing services in Austin.