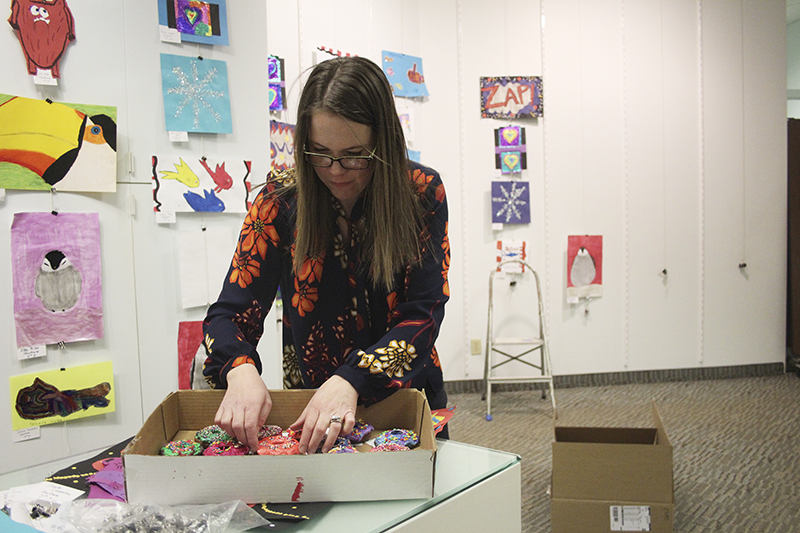 With an estimated influx of over 1,000 pieces to exhibit in this year’s all-student art exhibit opening Sunday (last year’s show included around 1,200), Albert Lea Art Center gallery manager Tom Mullen will be displaying art on walls, tables and in the open space, hanging from string attached to the ceiling with pieces back-to-back in free-standing corridors of art — basically, anywhere he can.

“That way, you can double the show,” Mullen said.

The pieces have been created by Albert Lea’s students from kindergarten through 12th grade in Albert Lea Area Schools and St. Theodore Catholic School and represent a wide variety of art. There will be clay sculptures, paintings, pencil drawings, paper crafting and printmaking. There will also be a pear crafted entirely with glitter paint, said Hawthorne art teacher Andrea Harves.

“I think it’s the best piece I have,” Harves said.

Harves estimated she submitted approximately 130 pieces between grades kindergarten and five. With student permission, she collects the art all year for the show.

This year, to celebrate the Winter Olympics, she had her class attempt to recreate the medals from the games — in this instance, out of clay.

Students pulled from a hat which medals they would recreate.

Those kids were very proud of those,” Harves said. 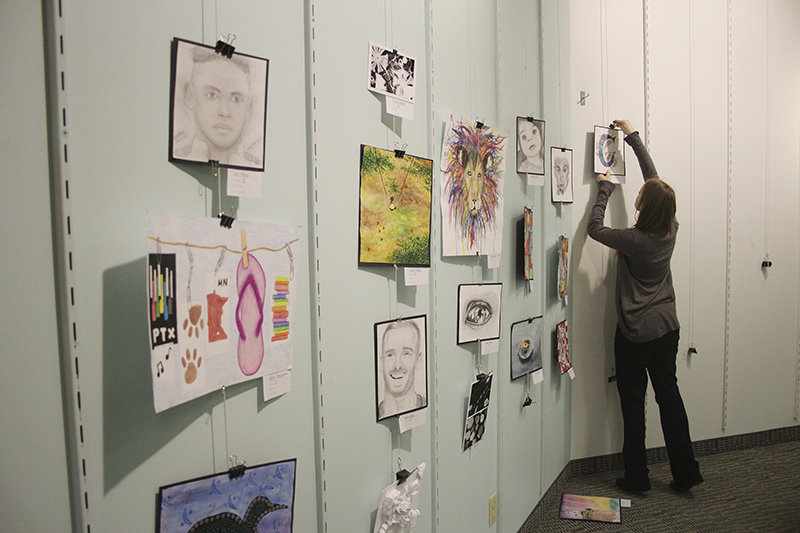 This year will also be the first year Harves submitted small-group canvas paintings to the show. The students have created them before, but usually they stay on the walls at Hawthorne. Harves said the selection is based on quality of work and effort put forth by the students.

“I look for pieces the kids are trying their best,” she said.

This year, the products of that effort will be showcased in a different space in the Northbridge Mall, directly across from where the show has been in the past few years.

“It’s a little bit smaller, but the lighting is much, much better,” Mullen said of the new space.

After the show, the art will go back to the respective schools. At the Albert Lea Area Schools elementaries, the pieces are put on display at the school, Harves said. The staff votes for their favorite two pieces, and the winners’ art is framed and hangs on the walls of the elementary school until the artist graduates from high school. According to Harves, this is one reason why it can be exciting for students to have their work selected for the all-student art exhibit.

“It’s kind of a big deal because it leads to that next step,” she said.

For Mullen, the exhibit also presents a chance to see the way children are developing as artists because it includes pieces from all ages in the school system.

“It’s really interesting to see what kids are doing at the kindergarten and first-, second-, third-grade level, and you look at … how they how they improve and the work that they do in high school, and you can just kind of see the, see the abilities of the children as they go through the years,” he said.

Mullen estimated this is the 10th year the Albert Lea Art Center has put on the all-student art exhibit. He said it is important for students to have art in their schools and education.

“I think it’s just a celebration of artwork for kids, and everybody loves artwork by kids — and they will be astonished by the quality of the work the kids make,” Mullen said.

When: The exhibit opens from 1 to 4 p.m. April 8 and continues through April 28.