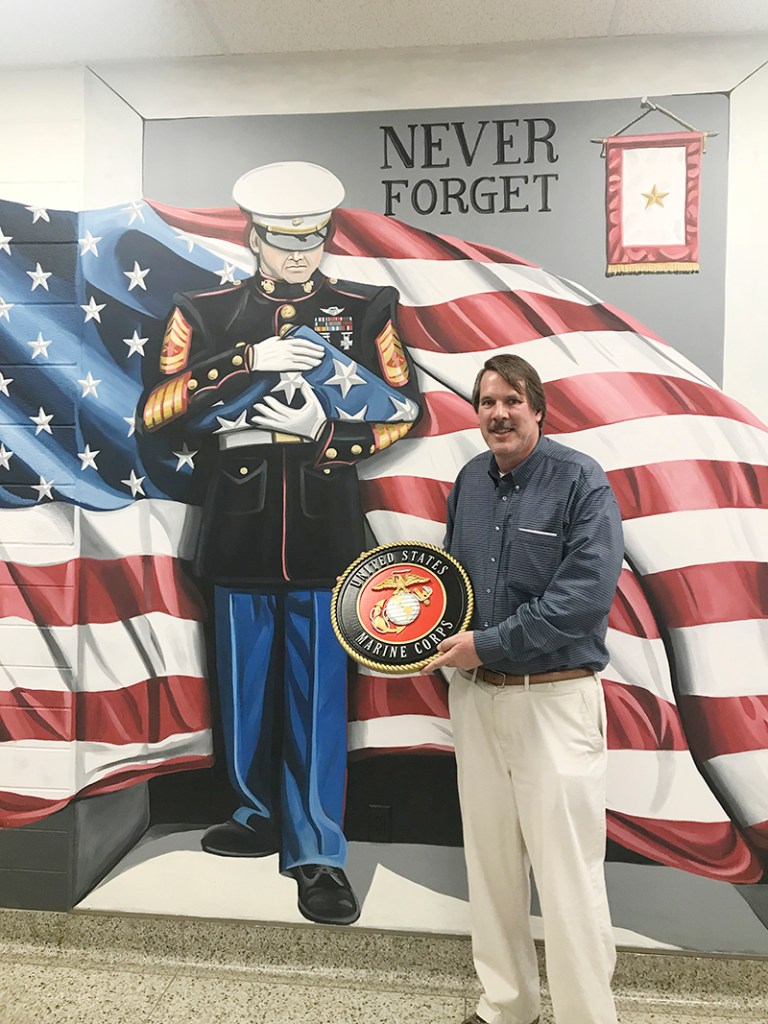 Project Citizen teacher Gary Irons holds one of five seals which will be added to the veterans wall in Lake Mills Community School to represent the five branches of the military. Photos and a flag in a display case will also be added to the mural. - Kelly Wassenberg/Albert Lea Tribune

LAKE MILLS — There is a difference between being a resident of a community and a citizen of a community. A Lake Mills class is designed to teach students to be the latter of the two.

The class started as an extracurricular activity known as Project Citizen, which was started by special education teacher Gary Irons about 20 years ago. After only two years, the program’s funding was cut, yet the school’s principal thought Project Citizen should continue. As a result, the program was brought into the seventh-grade classroom for all students.

The class is on a rotation with two other classes — technology and health smart reach. For 15 days, one group of students attends a Project Citizen class; they then rotate to the other two classes before making their return to Iron’s classroom.

During their Project Citizen class, students work on a community service project. After being broken off into groups, students come up with a problem they see within their school or community that they would like to address. Students then come up with four possible solutions or options to solve the problem and list the pros and cons of each before settling on their solution and creating an action plan.

This year alone, Lake Mills seventh-grade students are working on nine different projects, one of which may see pet waste stations being added to the city’s walking trail.

Students in the class wanted to find a way to enhance the trail. Options they came up with included having the Lake Mills gardening club add flowers to the trail path, creating a sign that would show a map which plotted out the distance walked for each route along the path, a fenced in dog park along the walkway or adding pet waste stations, which include bags for walkers to use to clean up after their pet and a waste receptacle to discard the bags in.

The group working on this particular project hosted two dances to raise the $460 to buy two units and have already spoken with the Lake Mills Trails Committee on where the units should be placed along the trail. All the students have left to do is present the idea to the city council for its approval and have the units installed.

Irons said other projects students are working on include purchasing a new garbage can for downtown, creating a walking history tour for July Jubilee, new volleyball courts, a display featuring the school’s sports records, expanding the reach of the school’s character traits into the community, publishing a cookbook, allowing teachers to share special activities they like with students during one of their class periods and expanding the veterans wall in the school’s cafeteria.

Irons feels the process students learn during these projects is valuable. They learn to draft letters, make phone calls, write requests for grant funding and present their ideas to adults or boards, such as the school board or city council.

Some of the projects have been a success over the years, yet sometimes their ideas are rejected or students simply run out of time.

Along with working their way through the process of creating possible change, students often take part in their implementation. One class project included petitioning the city to add a handicap accessible parking stall downtown. When the city agreed to add a handicap accessible parking spot, city maintenance staff showed the students how to order the sign and students helped city staff paint the parking spot and install the sign.

“It’s a very positive thing for the kids and the community,” Irons said. “It builds community and shows the kids that citizens are active, not passive.”

He said he thinks it’s an important lesson for the students to learn.

“When you think about all the people in our community that make Lake Mills what it is, a lot of it is volunteers, and they are just being good citizens.” 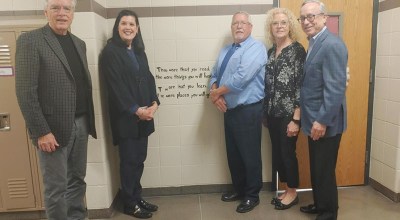