A Glenville man who allegedly molested a girl he knew multiple times was charged with a felony Monday in Freeborn County District Court. 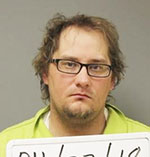 Court documents state Schilling was charged after the alleged victim said Schilling molested her in a series of incidents.

In a statement to a Freeborn County detective Friday, Schilling reportedly indicated he was close to the alleged victim and “felt a special connection with her and could see his younger self in her,” court documents state.

“These are very serious charges,” she said, adding some of the accusations against Schilling include that he groomed the alleged victim.

She said Schilling did not corroborate accusations that he touched the alleged victim with any sexual intent and has been a lifelong Freeborn County resident.

He made all court appearances in a previous driving while intoxicated charge and successfully completed probation, she said, adding she anticipates he will continue to abide by court requirements if released.

Leuning set conditional bail at $10,000, contingent on Schilling having no contact with the alleged victim or any other juvenile, submit to random testing, not leave Minnesota without written court approval, not enter bars or liquor stores, not use alcohol or drugs, sign a waiver of extradition and follow other court requirements.