Funeral services for Grace H. Arneson of Albert Lea, will be at 10 a.m. Saturday at East Freeborn Lutheran Church in rural Albert Lea. The Rev. Matthew Griggs will officiate. Visitation will be from 4 to 7 p.m. Friday at Bonnerup Funeral Service and one hour prior to the service at the church. Interment will be in East Freeborn Cemetery. 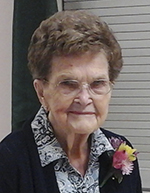 Grace was born March 14, 1922, on the family farm, the daughter of Herbert and Ida (Hoverson) Thompson, and the seventh of 12 children. She attended the Bell Country School. On March 24, 1940, she was united in marriage to Alton H. Arneson at East Freeborn Lutheran Church.

Grace was a wonderful wife, mother and grandmother and enjoyed spending time with her family. She was very active in church activities including choir, quilting and the Altar Guild. Grace was a master seamstress and made many bridesmaid and prom dresses. She also enjoyed going to auctions, buying antiques and then selling them on the internet.