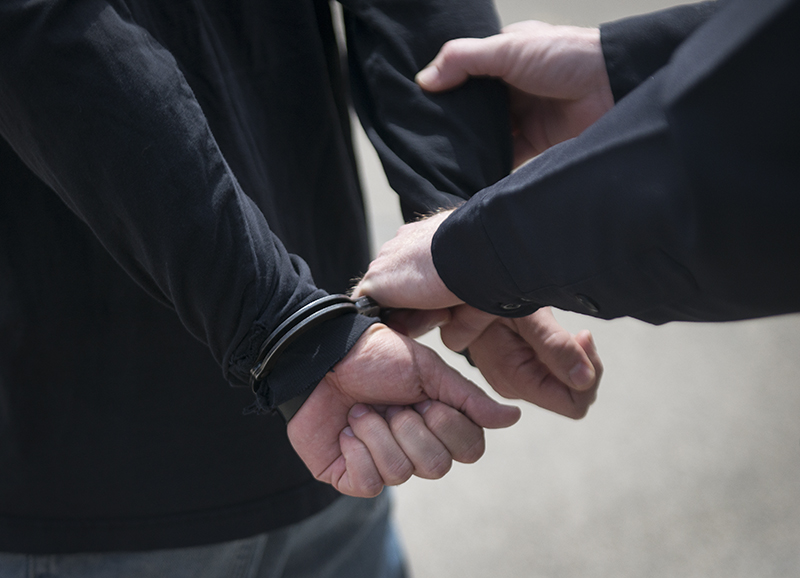 There are numerous steps for law enforcement officials to take once a crime has been reported before the situation enters the court system. - Photo illustration by Colleen Harrison/Albert Lea Tribune

Numerous steps for police when looking into allegations

Editor’s note: This is the first in a four-part series looking into the criminal justice system in Albert Lea and Freeborn County.

It all begins with a call to Freeborn County dispatchers.

From there, Albert Lea officers and Freeborn County Sheriff’s Office deputies travel to the scene of a crime, working with the Freeborn County Attorney’s Office and Crime Victims Crisis Center as the case progresses.

That initial call to dispatchers goes through many steps before it enters the court system.

If an officer is approaching his vacation day, the department might pass the investigation to a detective or another patrol officer.

“Typically I use that as a tool, that acronym, as far as deciding what goes from patrol to investigations,” said Albert Lea Deputy Director J.D. Carlson.

Of his investigators, Carlson said “they all have different strengths. And, depending on what their caseloads are, I’ll assign those cases out to investigations to follow up as well. Sometimes they’ll pick up those cases and continue to follow up on it just by themselves, or they’ll reach back to another investigator or they’ll reach back to the original officer to partner with the original investigations.”

Freeborn County Sheriff Kurt Freitag said if officers arrive at the scene of a suspected burglary, there could be latent evidence left behind. In such cases, deputies bring evidence collection kits for latent fingerprints.

The department focuses on collecting evidence once officers arrive on scene.

“For evidence that’s taken from a scene, it could be property that’s stolen in a theft or a burglary or it could be forensic evidence that (the suspects) don’t know that they took — hair fibers, carpet fibers, tissue, things like that, imprints — and we look for those types of evidence,” he said. 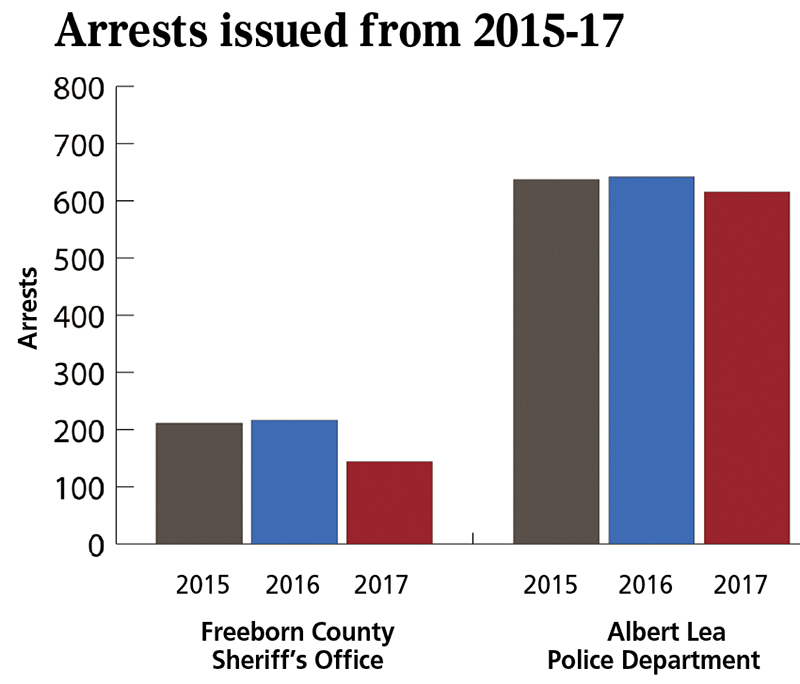 Freitag said officers on scene have to remember guilt must be proven beyond a reasonable doubt.

“Beyond a reasonable doubt isn’t 100 percent, but it’s not far from it, either,” he said.

Along with interviews, the Sheriff’s Office reconstructs timelines.

Depending on the case, multiple officers respond to the scene. Freitag mentioned the shooting death of Spencer Daniel Brown in August 2016 at Myre-Big Island State Park as a case where multiple agencies were needed.

“The more people we have going to the scene on something like that, the better,” Freitag said, adding when he was in route to the park, he called the Bureau of Criminal Apprehension and informed the duty officer to contact the crime lab, which is used by local agencies during major cases.

Freitag said officers are advised to not inadvertently destroy, taint or improperly collect evidence. He mentioned in a criminal sexual conduct case, officers should not throw a piece of clothing with bodily fluids in it in a plastic bag to prevent the evidence from decomposing.

He advised officers who don’t know how to handle a situation to take a photograph to prevent incorrect action.

Albert Lea police are assigned to specific areas in the communities with lieutenants overseeing each area.

“While they’re en route, they are thinking the whole time what they’re doing, how they are going to respond, what they can expect when they get there from their experience,” Carlson said.

Officers must adjust to specific situations. On domestic calls, Carlson said police sometimes park down the street from the house the incident is taking place to prevent the situation from escalating.

On cases such as a dispute between neighbors, police try to separate the people involved, compare notes and make a decision on the direction of the investigation.

Carlson said a majority of the calls police receive involve “sorting through people’s bad days,” and do not include issuing citations or making arrests.

Reports involving children are forwarded to the Department of Human Services.

The environment officers have filed reports in has changed in the last 20 years.

Previously, police officers shared two computers. Today, every officer has a computer and a cubicle. The largest change Carlson has noticed in his career is the electronic shifting of reports.

“The basic process is the same, but technology is more advanced now and influences it,” he said.

Officers now have digital cameras, recorders and computers in their cars — technology that can be used to build cases.

Freitag said new officers sometimes struggle with properly reading the Miranda rights of suspects, adding there are circumstances when a suspect could say he was intimidated by the situation and felt like he could not leave even though he could.

“Can you push that past a jury or a judge in an omnibus hearing and make him think that you thought you were in custody?” he said.

“These are things that trip up some new cops, new deputies, officers, and it’s not just us. It’s across the country and it’s part of learning, it’s part of experience, and when you screw up one investigation, it’s a high learning curve, and you don’t do it again.”

Freitag said though some deputies are proficient at investigating, there is more to being a quality officer.

Freitag spoke of the necessity of an officer writing a quality incident report, which could include observations of the eyes of a strangulation victim or gunshot residue on the body of a dead shooting victim.

He said the goal of the Sheriff’s Office in an investigation is to serve the community.

“The Sheriff’s Office is always committed — always committed — to doing the best that we can,” Freitag said. “And when we identify shortcomings, we address that and find ways on how to improve it, because our ultimate goal is to provide the best services we can for the people of our county, and that’s our mission.”

Last year, arrest numbers for the Sheriff’s Office and Police Department both dropped.

How to decide when to charge?

“We take a look at all of that, and often the officer will, when they send up the report, they will have a charge sheet for suggestions,” Lambert said.

The Attorney’s Office then reviews the case to decide appropriate charges. Sometimes that corresponds with officer recommendations, while at other points it does not.

The severity of a crime sometimes increases because of the defendant’s history. A first-time domestic assault charge could be a misdemeanor if the perpetrator does not have a previous conviction for domestic assault. With one prior conviction in the last 10 years, the charge would increase to a gross misdemeanor, and two prior convictions in the last decade would result in it being a felony.

Lambert said sometimes reports can be difficult to form.

“It’s honestly a case-by-case basis,” she said. “The officers here are really good about adding all of the information that they have, but to read a report, versus actually being there, yeah, it can be difficult.

Lambert credited support staff Sara Reindal and Jill Johannsen for ensuring lawyers in the office have the information they need to file proper charges.

“They do a great job at that,” Lambert said.

Sometimes Lambert speaks to the alleged victim and asks them how the incident affected them and their wishes for sentencing, using that information when a plea offer is made in the matter.

The statute of limitations on charging someone with a crime is generally three years, Lambert said.

Lambert said sometimes alleged victims in a case recant and view themselves as being able to make the decision on whether a case moves forward; however, it is up to the Attorney’s Office to decide whether the case will continue. She views it as important to hold perpetrators accountable for their actions.

“Even though a victim recants or a victim says, ‘I don’t want to press charges anymore,’ they’re not pressing charges,” she said. “They aren’t our clients. Society — or the public — is, I guess, our clients.”

Domestic violence is the No. 1 case the center sees.

“They’re in shock, basically,” said CVCC advocate Andrea Mauer of domestic violence victims. “They are numb at that moment.”

Officers give crime victims the card for the center, and the center reviews incident reports.

CVCC advocates said society sometimes minimizes the behavior of the perpetrator and questions the motives of the victim.

“We kind of, in our society as a whole, tend to believe that, especially relationship-based type of things, where people, even when they know each other, they’re equally to blame, and that really is not the case,” said Kim Tiegs.

“What we do here is empower.”

Advocates said the court system can be stressful for abuse victims, because sometimes the abusive spouse has more money and fights for custody for vindictive reasons.

Sometimes financial therapy is provided, and victims are made aware of available community resources based on individual needs, such as housing,

There is a pattern in the reaction of domestic abuse victims, who sometimes justify the actions of the abuser and mitigate the circumstances of the event, according to the CVCC.

“We have to meet them where they are at,” Tiegs said. “We can’t automatically assume that every person who comes in needs to leave, we just can’t. It needs to be diverse.”