John Edward Corrigan, 91, died peacefully at his home in Altoona, Wisconsin, surrounded by his four children on Thursday, April 5, 2018. 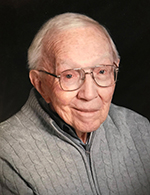 He is a graduate of St. John’s University and the University of Minnesota. In 1956, John moved to Rochester, where he first worked for Thorp Loan and Thrift and then for IBM, where he retired in 1989.

While at Thorp Loan and Thrift, he met Margaret Ludescher. They were married in 1958 and spent the next 54 years together, until her death in 2012. Margaret and John had four children. In 2015 John moved to Altoona to be closer to his children and grandchildren.

John loved to travel, and together, he and Margaret visited almost every state in the U.S. and several European countries. This included traveling to Burkina Faso, West Africa, to visit their son, John, who was a Peace Corps volunteer.

John was a voracious reader of books and loved his newspapers and crossword puzzles.

He is survived by four children, John (Lisa) Corrigan, Mary (Harry) Corrigan Pearson, Anne (Chris) Corrigan Watson and Kathleen (Bill) Corrigan Howe; and five grandchildren, Austin James, Colin John, Abagael, William and Jack. He will also be fondly remembered by many friends and staff at The Classic At Hillcrest Greens in Altoona, where he lived since 2015.

He is preceded in death by his wife, Margaret; brothers Patrick and James; and his parents.

Visitation will be from 6 to 8 p.m. Friday in the River Park chapel at Macken Funeral Home and one hour prior to the mass at the church Saturday. The funeral mass will be at 11 a.m. Saturday at St. Pius X Catholic Church. The Rev. Russell Scepaniak will officiate. Burial with military funeral honors will be in Calvary Cemetery.

In lieu of flowers, a donation may be made in John’s name to a Hospice of the donor’s choice.