Funeral services for Judith F. Hagen will be at 10 a.m. Saturday at Zion Lutheran Church in Albert Lea. The Rev. Robert Stohlmann will officiate. Visitation will take place one hour prior to the service at the church. Interment will be in Graceland Cemetery. 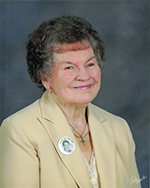 Judy passed away Wednesday, April 11, 2018, at Lakeview Hospital in Stillwater. She was 80.

Judith Fay (Wetterling) Hagen was born Aug. 16, 1937, in Mason City to Erwin and Lillian (Boehnke) Wetterling. She was raised on a farm outside of Miller, Iowa, and graduated from Ventura High School in 1954. She continued her education at Luther College and then Waldorf College in Forest City, Iowa.

On July 18, 1958, Judy was united in marriage to Richard Dean Hagen in Garner, Iowa. The couple moved to Albert Lea, where they became lifelong residents.

Judy was active in Zion Lutheran Church, where she was a part of Hannah Circle and Lutheran Women’s Missionary League. She also taught Sunday school for many years. Judy worked selling Sarah Coventry Jewelry for 15 years, and also worked a few years at Trades and Labor Credit Union in Albert Lea. Judy supported her husband’s work with the Albert Lea Trades and Labor Assembly. She stayed active in the union even after her husband’s passing.

Judy was an avid card player and enjoyed listening or playing music, watching football and basketball or caring for her pets. If it was around election time, you could always find Judy and Richard at any Democratic gathering in the area. Judy was also an election judge for many years. Most of all, Judy enjoyed time spent with her grandchildren and great-grandchildren. Judy and her family were always involved in the Jacob Wetterling Foundation. Judy was always supportive of the foundation, participating in many fundraisers, wearing memorabilia for Jacob’s Hope and was always supportive of the Wetterling family mission for the protection of all children.