A memorial gathering for Linda Ille Mosmann of Heilbronn, Germany, will be from 5 to 7 p.m. Friday at Bonnerup Funeral Service in Albert Lea. 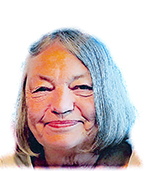 Linda passed away suddenly from a heart attack Sunday, April 8, 2018, in Heilbronn, Germany.

Linda was very active in her school years. She was on Student Council, in A and B chorus, chorale, Girls Recreational Association, Hi-Teens, Pep Club, Tigers Roar, Script and Gavel, French club, Ah La Ha Sa, Quill and Scroll, was class secretary, head majorette for the high school band and a candidate for Homecoming Queen. She graduated from Albert Lea Senior High School in 1961.

Linda went on to receive a nursing degree from Fairview Hospital and worked at University of Minnesota Hospital.

She married Heinz Mosmann in Germany and had four sons.

Linda worked in nursing while living in Germany. She enjoyed the fine arts and humanities. She loved traveling to Italy and Spain on holidays. Linda had some unique hobbies. She handcrafted characters by felting, and dolls without patterns. Each were very individually styled. She enjoyed being with her family and loved her children and grandchildren deeply. Linda cherished coming back home to Minnesota to visit her family who loved her so very much. While in Minnesota, she often commented on the beautiful blue skies and the white clouds, so different from what she saw in Germany.

Linda always saw only the best in everyone. She brightened up the day when she walked into a room with her fantastic smile. She will be missed by all who knew her and she remains in their hearts.

She was preceded in death by her father, Roger Ille; and her grandparents.