A time for remembering and sharing for Linda Diane View of Albert Lea will be from 2 to 4 p.m. April 21 at Bonnerup Funeral Service in Albert Lea. 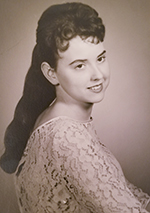 Linda was born Aug. 14, 1944, in Austin, the daughter of Francis and Vivian (Palmer) Thompson. She was the second to the youngest of 11 children, and due to her tiny stature, soon gained the nickname “Eeeny” from her family and friends.

Linda grew up and attended school in Glenville and graduated in 1963. She was also confirmed the same year at St. Paul’s Church on the Hill in St. Paul. Soon after she moved to St. Paul, she worked as a waitress at Mickey’s Diner, a job she truly enjoyed and did very well.

On July 28, 1965, she was united in marriage to Russel Freeman. Russel had two children from a previous marriage, Linda and Raymond, whom she adored. The couple had two children together, Francis and Ginger, then later divorced in the fall of 1977.

On Sept. 8, 1979, Linda was united in marriage to Allen View at United Methodist Church in Albert Lea. The couple relocated to Minneapolis, where they welcomed the birth of their daughter, Jessica.

For the next several years Linda was an active mother and homemaker, and helped her husband own and manage several businesses.

In 1985 the couple settled in Wells, where she delighted in caring for all of her grandchildren. Over the years she worked various jobs and volunteered for family activities at school, church and in the community. Her hobbies including doting on her grandchildren, playing cards and marbles, frequenting the casino (she won almost every time), crafts, growing beautiful houseplants and decorating for every holiday. She made lifelong friendships wherever she went and was truly a great friend. She enjoyed helping others and would not hesitate to put others’ needs before her own. Generous to the end, Linda wanted to help people by donating her body to the medical science program at Mayo Clinic, a gracious gift that gives opportunities for learning and directly contributes to the discoveries that help future patients.

She was preceded in death by her husband, Allen; her parents; sisters Mary Faye Thompson, Phyllis Christ and Francine Thompson; and brothers F. Paul Soper, Wilson Soper and Jim Soper.