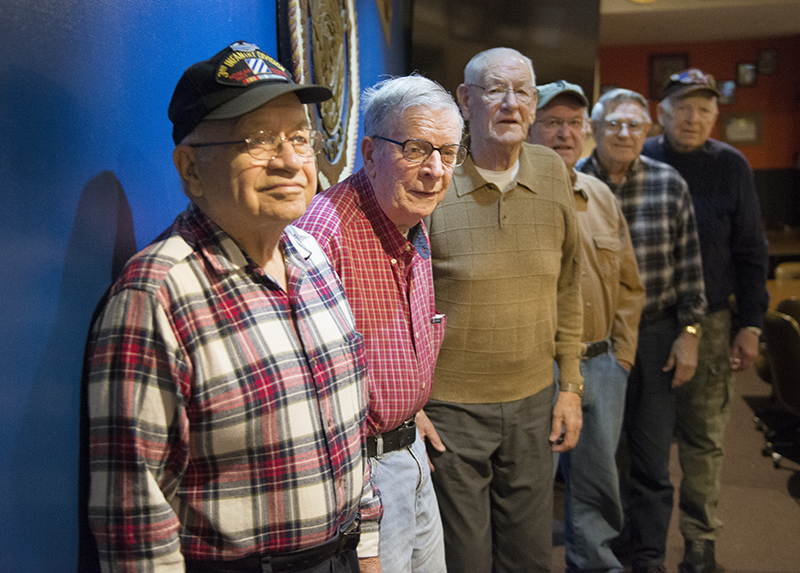 Six local heroes will be going to Washington, D.C., Saturday to be honored for their service to their country.

Lysne served in the United States Army artillery between 1953 and 1954 in Korea, “after the shooting had stopped.”

Hagen is an Army veteran who was in Korea when the Korean War ended.

“My wife has given me hell a few times,” he said. “I said, ‘I don’t know what those guys were doing over here, I was only here less than three months and had it all wrapped up.’ She said, ‘That isn’t even funny!’” Hagen is married to Strand’s sister.

Neff was in the Navy air corps and was stationed in Argentia, Newfoundland, for the majority of his service, which was between 1951 and 1956.

Christianson joined the National Guard at the age of 18 in January 1951, and was in Korea by the fall of that year. He said he served in combat for about nine months before being discharged in June 1952.

Strand was a Navy aviation storekeeper who operated off the coast of Korea to supply aircraft carriers between 1951 and 1954.

Hatleli was drafted in 1952 and served for two years.

Once in Washington, the veterans will see a number of sights, including memorials dedicated to the different military branches; the World War II, Korea and Vietnam war memorials; as well as the Capital, White House and Lincoln Memorial, among others. Flag and taps ceremonies will take place at a number of the memorial sights, and the group will also attend a changing of the guard ceremony at Arlington National Cemetery. The veterans will be treated to a dinner at Columbus Club in Arlington, Virginia, before flying back to Minnesota later Saturday night.

There will be about 167 people on the plane, including the pilots with each of the veterans having an escort to accompany them throughout the day — either one of their family members or friends or one provided for them. Each of the six local veterans going to D.C. will be accompanied by one of their respective sons. Being able to share the experience with their children will make the day even more special, they said, and is something Lysne said will be especially true for his son, who is also a veteran from serving as a Marine.

The average age of all the veterans attending are between 83 and 96. Strand said the Honor Flight Network is currently working on accepting the last of the World War II and Korean War veterans, and then he said the network should be accepting Vietnam War veterans applications next. Priority of accepted applicants is given to those wounded in combat, as well as the oldest or most ailing veterans applying. Otherwise, Strand said the applicants are accepted in the order of the time period they served.

“It’s an honor to be able to do this,” Strand said. “The people who have been on it, they all rave about how great they were treated.”

Veterans take part in the honor flights from all over the country. As far as this group of six knows, this is the largest group from Albert Lea that has gone on the same flight.

He said the people he has been in contact with in the area have always been supportive, but he has talked with veterans from other areas in the country who weren’t from communities as supportive during their homecomings. Hagen hopes honor flights can be a way to mend old wounds, so to speak.

“Just by being involved with this, and it isn’t even over yet … if there was any animosity felt from the war … I think they’re laying all of this other stuff to rest, as it well should be,” he said. “Veterans like to hold their head up high, and if we can’t hold it up ourself, we like to have the public say, ‘Oh come on, you can get it up there.’”

“The people from Vietnam, they got some awfully bad press. They were not the ones in charge of what was going on, they were following orders,” Strand said. “I can really understand why they were disappointed with the way they were treated. It wasn’t right.”

Each of the six Albert Lea veterans were accepted the first year they applied, and found out they had been accepted about a year after sending in their applications. They all said they’re looking forward to just about every aspect of the trip.

“This is all part of our country, and I want to see all of it,” Strand said.