New life for an old machine 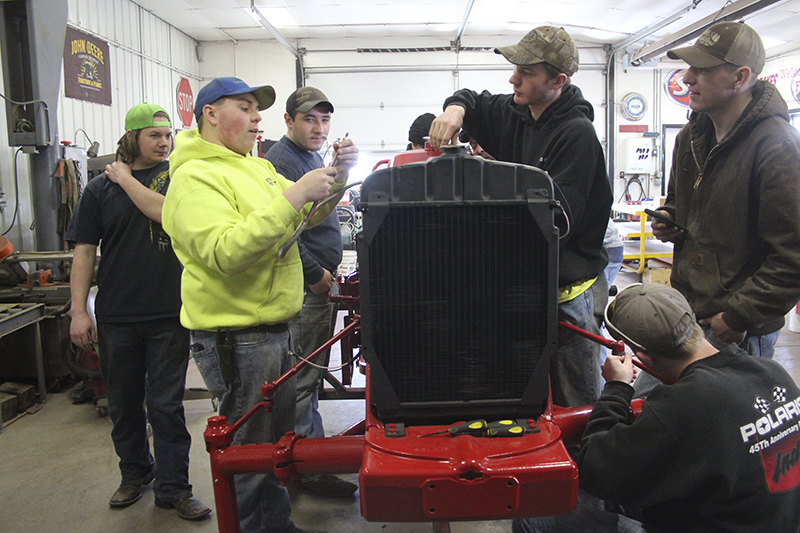 From behind, without the wheels and without the metal paneling, the machine looks like a larger-than-life grasshopper. Those less involved in the process might call its thick, bright sheen a fire-engine red.

Albert Lea FFA member Kevin Smeby knows better. It’s a Case IH factory enamel paint, and it’s the right era color for the 1958 International Harvester 350 High-Utility tractor he and several of his FFA friends have been restoring in Smeby’s workshop since December. This summer, the group will raffle it off at the Freeborn County Fair. 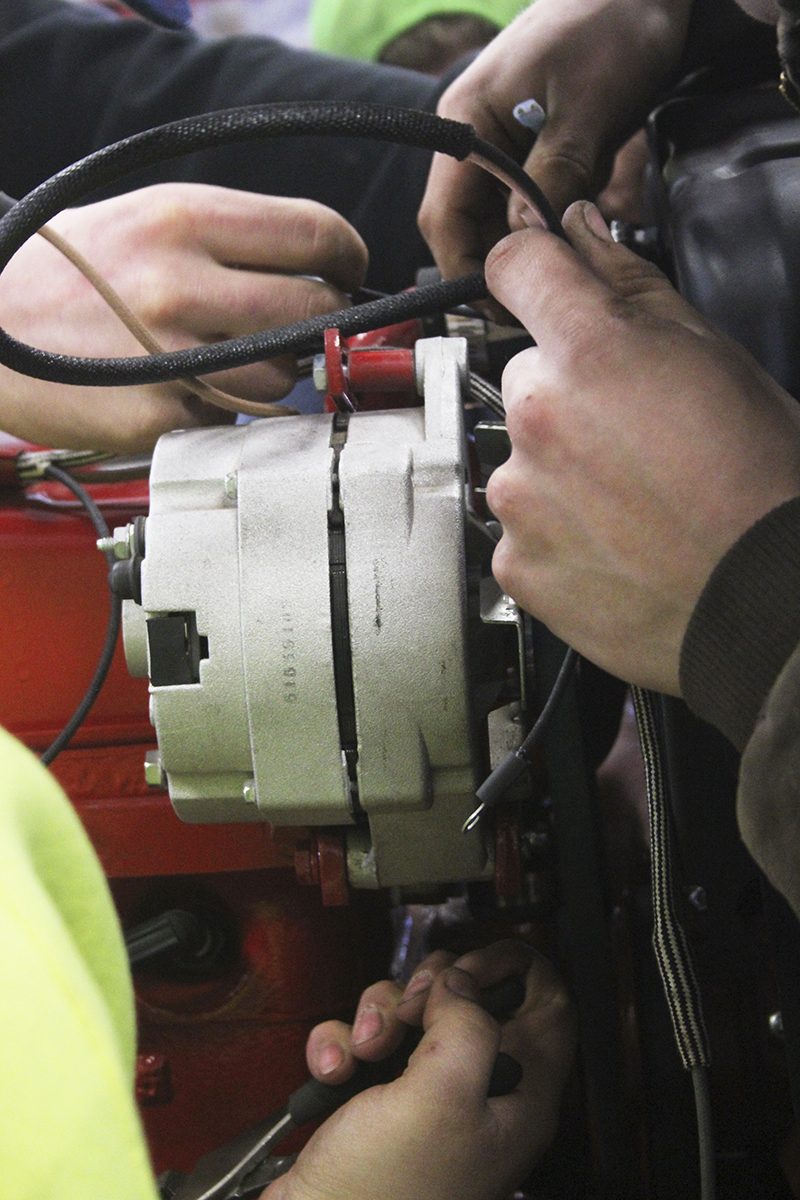 FFA chapter president Levi Wicks found the International Harvester on a tractor-related Facebook page in a post that offered it up for free to a group of FFA or 4-H members willing to restore it.

“We’d probably drive a couple hours to go get something like that,” Wicks said he thought when he saw the post, which didn’t list a location.

“A couple hours” translated into 39 as Wicks, Smeby, Colton Uthke and Jaydon Weigel hit the road to Culpeper, Virginia, and back over a short break in mid-October. 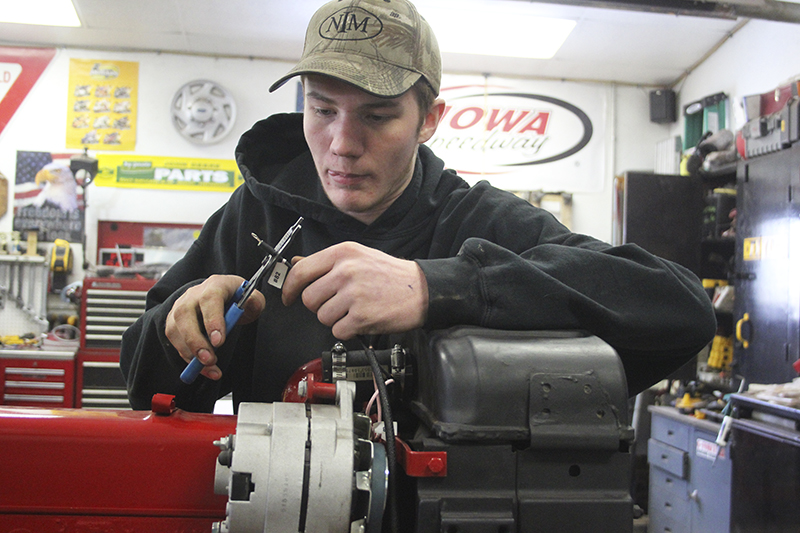 Kevin Smeby concentrates Saturday as he trims the end off a cord on an International Harvester. – Sarah Kocher/Albert Lea Tribune

“We determined, for a free tractor, it was worth it,” Wicks said.

Jesse Wise and his wife, Janet Wise, run a scrap yard in Culpeper: Wise Services & Recycling. They’re also farmers. Jesse Wise said he picked up the International Harvester hoping to restore it himself.

“Maybe my eyes were better than my stomach, so to speak, because it was just a lot of work,” Wise said. (Smeby and Wicks estimated that between the FFA members restoring it, they have probably already put in between 1,200 and 1,500 hours of labor.) 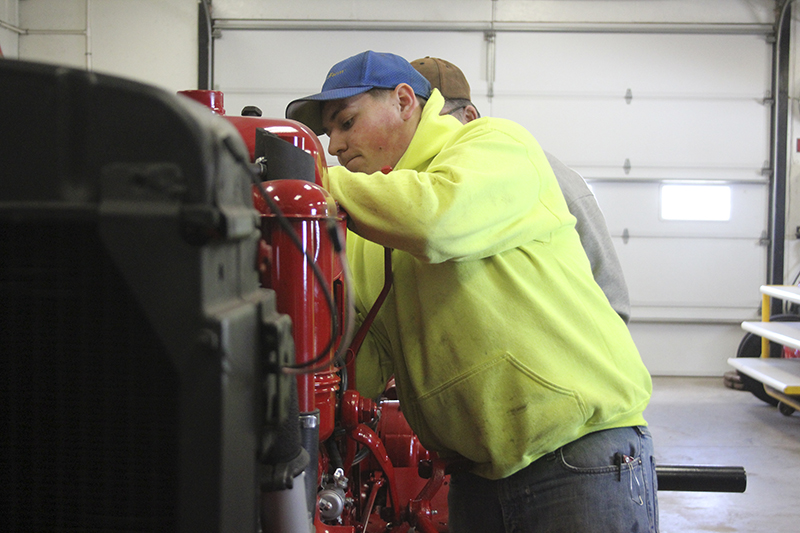 When he put the tractor up for grabs on Facebook, he wasn’t expecting to be contacted by a 17-year-old.

Instead, because neither Smeby nor Wicks were old enough to check out a hotel room, the four FFA students stayed the night with the Wises and the next morning, loaded up the tractor and drove it back to Minnesota. 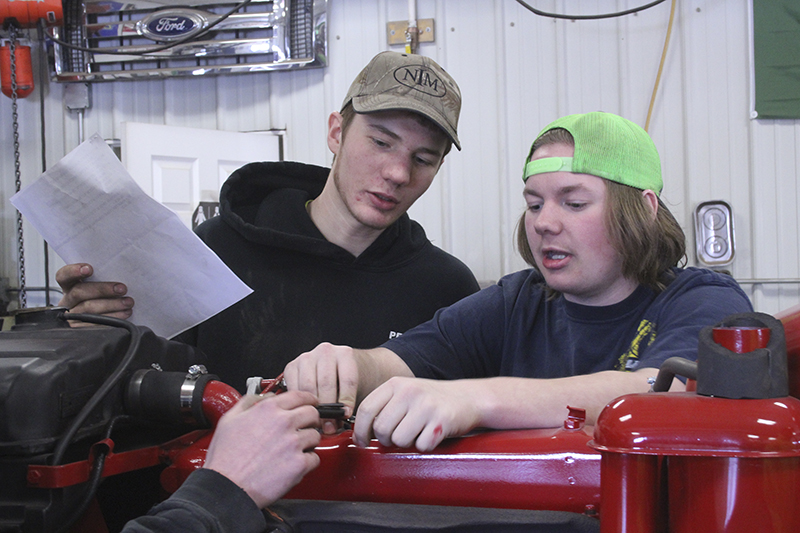 “I was very impressed with Levi and them,” Wise said. “They gave me a new hope in their generation — the younger generation.”

Now, Wise is keeping tabs on the group’s headway.

“A lot of people down here have been watching the progress on Facebook and how they’ve redone that tractor, and it’s pretty neat,” he said. 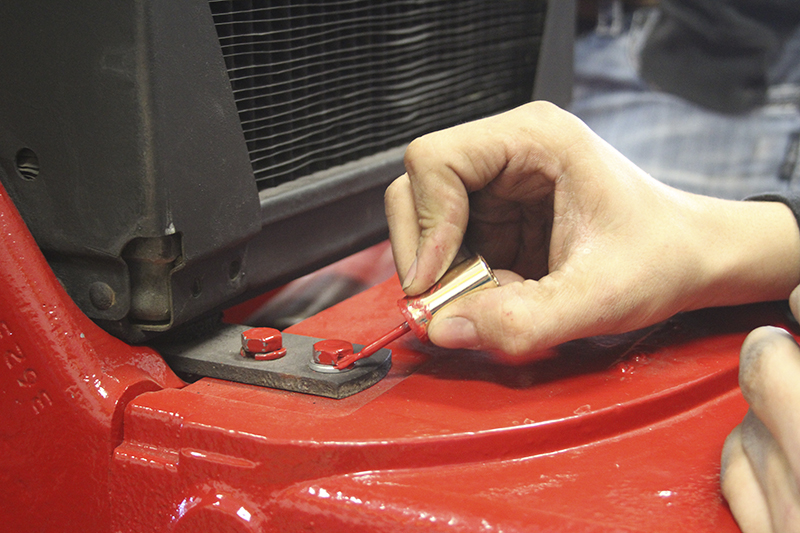 The group took a nail polish bottle, filled it with the red IH enamel paint and used the nail brush to touch up the smaller surfaces. – Sarah Kocher/Albert Lea Tribune

Between the two of them, Smeby and Wicks have restored 11 tractors. In some ways, it’s old hat. But in many ways, this tractor sets itself apart from their previous work.

For instance, of the approximately 20 tractors Smeby has had his hands on, this is only the second that hasn’t been a John Deere.

“If this was a Deere, I’d know everything,” Smeby said. 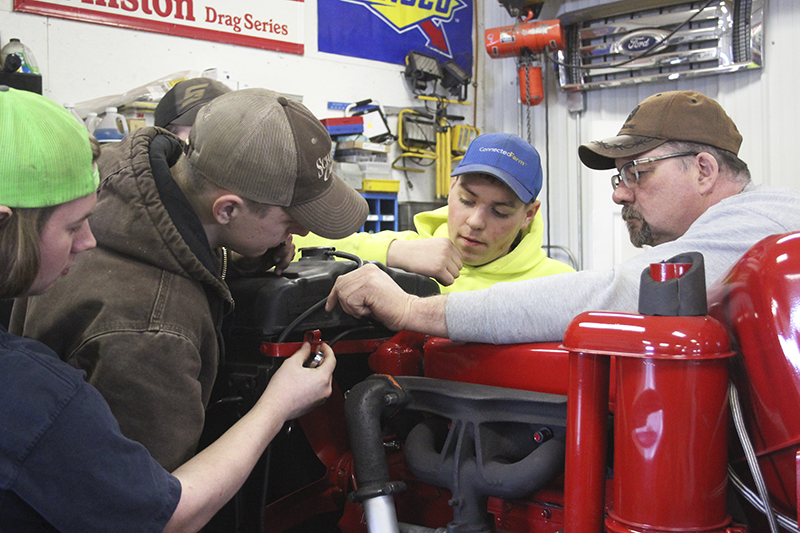 But it’s not. And despite his work on this tractor, his affinity for Deere is not likely to change.

“I’m still not an IH person,” he said. For Smeby, working on this tractor has been an adjustment to the Harvester way of doing things.

For Wicks, it is a little different. His family’s farm uses International Harvester equipment, and he has rebuilt four IH tractors with his dad. Nonetheless, it is a fairly new experience for him, too. It’s not a machine that pops up often. 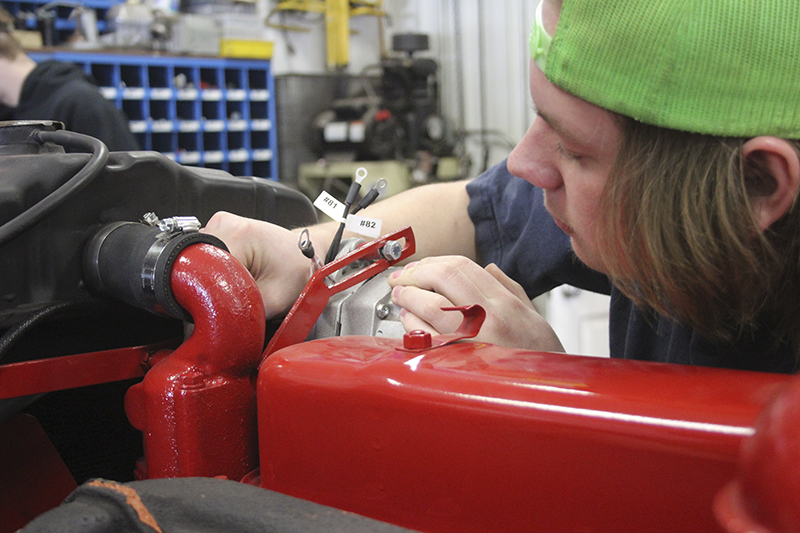 Coltan Uthke said he grew up around tractors. His father works at a John Deere dealership in Hollandale and his grandfather was really big into tractors. While he knew a fair amount before, he said he has learned a lot through this restoration. – Sarah Kocher/Albert Lea Tribune

There’s a front axle knee, for instance, that they weren’t sure how to fix. It’s intentionally angled, but a previous repair had welded it straight.

“We didn’t really have much to go off of because it’s a pretty rare tractor,” Wicks said — one of 877 made. They can’t get buy a new International Harvester 350 High-Utility front axle knee or get dimensions from a new one because there isn’t a new one.

On a workshop table Saturday was a small pile of Harvester-red miscellany, nuts and brackets. Among the few small pieces left to attach is a metal bracket about six inches long and the width of a paint stick. As of Saturday, they still weren’t quite sure where it went.

But at the end of the day, Smeby said, restoring this tractor is the same concept as the ones before.

“It’s still a motor,” he said. “It’s still a transmission. It’s just a little bit different, and that kind of sometimes poses a challenge, but it helps once you have that background knowledge.” 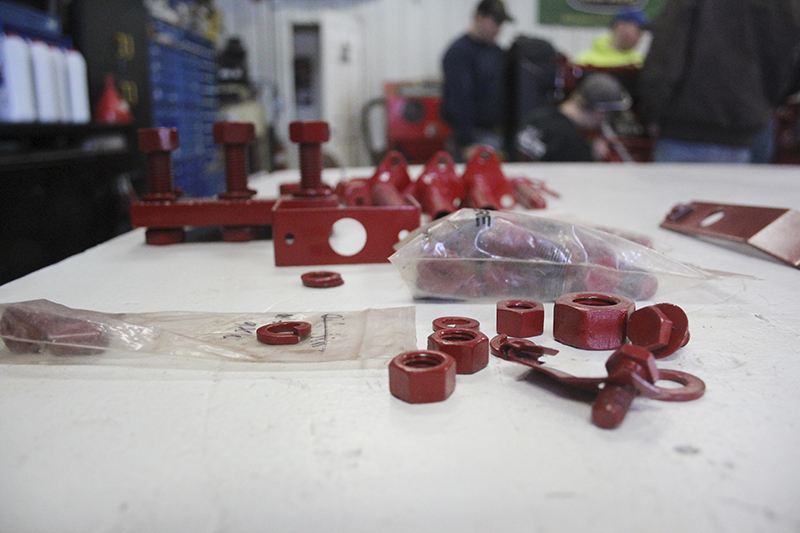 As of Saturday, these were the small parts remaining to put back on the tractor. – Sarah Kocher/Albert Lea Tribune

And it’s still a spendy endeavor. Most of the large components were repaired rather than replaced, Wicks said. The expense has come from replacing a decent amount of little things. The small stuff adds up, Smeby said. In this case, it adds up to around $6,000 for parts alone.

“You’ll never get your money back out of them,” Smeby said of tractor restorations. With a raffle, the FFA restorers are hoping to combat that by collecting a little bit of money from a lot of hands. Wicks had seen an FFA group in Wisconsin do a similar thing.

“We’re hoping there will be a fair amount of demand for it when we raffle it off,” he said.

Wicks also said that $6,000 is a lower number compared to others he has seen. The group has had help from several area individuals and businesses who have donated parts or struck discount deals for them.

And then there was the original donation — a tractor, with no strings attached.

“I’m happy to see that they did what they said they were going to do, and I hope it helps their organization in some small way,” Wise said.