Richard Bennett Hoium was born Dec. 29, 1928, to Bennett and Ada Hoium in Albert Lea, where he attended school before enlisting in the U.S. military. 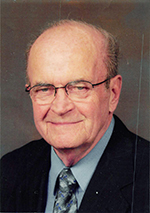 Richard and Beverly Parks were united in marriage in 1948.

Richard was stationed at the Panama Canal as a military policeman.

Richard and Beverly returned to Albert Lea to live in the home he helped build. He was a true craftsman, and was very knowledgeable about carpentry, metal work, plumbing and electrical. He used this knowledge to build additions, garages and other buildings, many times with the help of his son. He was always willing to help with his “Mr. Fix-It” attitude for family and friends.

He worked at Wilson & Co. and retired from Farmstead Foods as the superintendent of the maintenance division. After his retirement, Richard worked for Jim & Dude’s Plumbing. Richard was a member of the American Legion, Eagles Club and First Lutheran Church for many years. Many family trips were enjoyed at the cabin in northern Minnesota, a place that was very special to him. Richard enjoyed watching his grandchildren and great-grandchildren with their sporting events. He also liked to go snowmobiling in northern Minnesota and watching the Minnesota Twins and Vikings.

Richard’s celebration of life will be at 11 a.m. Friday at First Lutheran Church in Albert Lea. The Rev. John Holt will officiate. Visitation will take place one hour prior to the service. Bonnerup Funeral Service is assisting the family.

He was preceded in death by Beverly; both parents; sister, Arline (Grant) Hoyne; as well as many extended family members.