Funeral services for Roger A. Nordahl of Albert Lea will be at 11 a.m. Tuesday at First Lutheran Church in Albert Lea. The Revs. John Holt and Todd Walsh will officiate. Visitation will be one hour before services at the church. Interment will be in Hillcrest Cemetery with military honors accorded by Albert Lea veterans organizations. Bonnerup Funeral Service is assisting the family with arrangements. 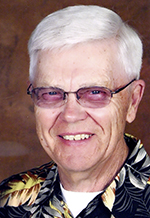 Roger died at Thorne Crest Senior Living Community on Wednesday, April 25, 2018. He was 82.

He was born March 22, 1936, in Faribault County, the son of Palmer and Gladys (Anderson) Nordahl. Roger graduated from Albert Lea High School and then served his country in the U.S. Army, receiving his honorable discharge from the reserves in 1963.

Roger married Marlene Peterson in July 1957 at Grace Lutheran Church. They made their home and raised their family in Albert Lea, and Roger worked for Wilson & Co./Farmstead Foods for more than 30 years. He later worked for Albert Lea Chemical Dependency Center as a driver for 10 years before retiring.

A great outdoor enthusiast, Roger loved all nature had to offer. He enjoyed walks, sharing camping adventures with his grandchildren and fishing. His favorite fishing holes included Forestville State Park and Finland, Minnesota. Many great memories were made and fish stories created. He was a crafted handyman, with the ability to fix anything and you could often find him tinkering around with a good country tune in the air. Roger and Marlene enjoyed wintering in Florence, Arizona, for more than 20 years.