Funeral services for Rose A. Holty will be at 1 p.m. Friday at the Bonnerup Funeral Service chapel in Albert Lea. Chaplain Todd Walsh will officiate. Visitation will be from 11:30 a.m. until the time of the service Friday. Interment will take place at Hillcrest Cemetery. 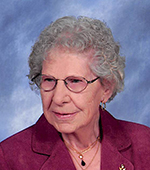 Rose Adeline (Opskar) Holty was born May 30, 1917, to Knute and Johannah (Mooran) Opskar in rural Climax. She was raised on a farm near Shelly and moved a few times before settling in Albert Lea in 1950, where she had been a resident ever since.

On May 16, 1937, Rose was united in marriage to Howard Holty in Shelly. To this union, the couple had five sons: Roger, Harold, Jerry, Richard and Glen. Rose worked as a nurse’s aide at Naeve Hospital, St. John’s Lutheran Community and Thorne Crest Senior Living Community. She worked for 25 years.

Rose was a member of Salem Lutheran Church in Albert Lea. She was active in the church, where she participated in Red Hat Society, Mary Magdalene Circle and Sew and Tell and sang in the choir.

In her free time she enjoyed playing the piano, helping others and was most known for her baking. Rose was constantly making favorites such as lefse, peanut brittle and banana bread, and would make mints for weddings, funerals and graduations.

Family was very important to Rose. She enjoyed every minute spent together with family.