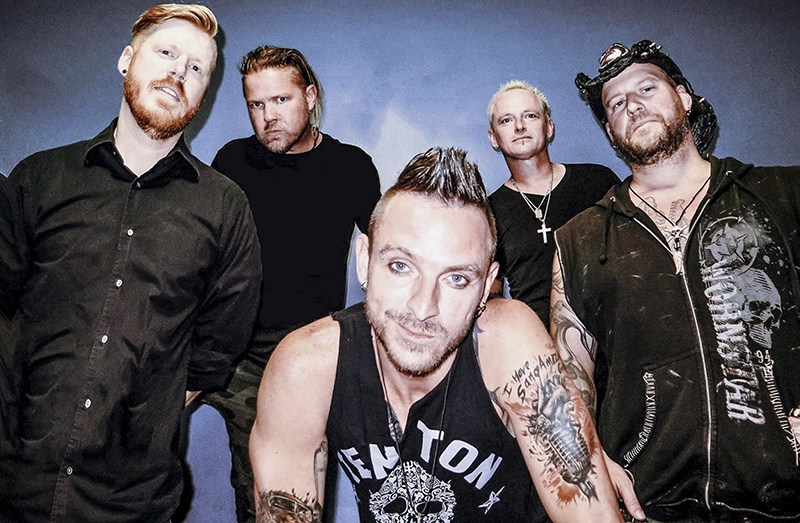 Saving Abel will perform with Strange Daze and Toggo Ultrarock on Tuesday at Wedgewood Cove. Provided

Some of the concertgoers flocking to Wedgewood Cove Tuesday night might not know what their ticket sales are financing. Grizzlies president Stephen Piper is OK with that.

“Most of the people that are coming aren’t doing it necessarily for the fundraising piece,” Piper said. “They’re coming for the music, so that’s been really kind of a cool concept.”

Saving Abel, Strange Daze and Toggo Ultrarock are headed to Albert Lea thanks to a connection with former music producer and current Grizzlies defensive coordinator Lee Alfson. He suggested a concert to Piper when the group was brainstorming fundraiser ideas.

“We don’t want to try and hit the same pots that everybody is dipping out of,” Piper said.

Alfson had Saving Abel in mind, but knew a lot of bands stay at home to play rather than tour. Two days after pitching the fundraising concert idea to the team, Puddle of Mudd announced their Redemption tour — with Saving Abel.

Saving Abel will be coming to Albert Lea in between shows in Illinois and Nebraska.

“We’ve run the gamut on, you know, every room, every kind of people,” Bartlett said. “In my experience, we’re lucky enough to say that Saving Abel fans are in A, B, C and D markets.” And while, on paper, Albert Lea may look like a D market, “to us, that’s where America lives. … Those are really our kind of people: small-town. You know, that’s where we come from.” 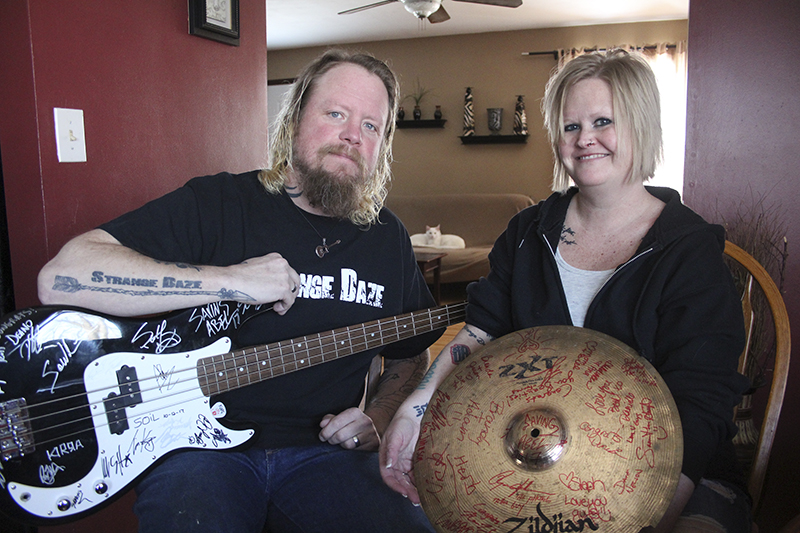 Angie Stendel holds their guest book from the Saving Abel and Strange Daze concert at which they were married. Dustin Stendel has the guitar signed by bands Saving Abel, Kirra, SOiL, Strange Daze and others passed around the tour bus to sign for the couple. Sarah Kocher/Albert Lea Tribune

They also got married at one.

When the two went to a Saving Abel show, lead vocalist Scott Austin said he would sing at their wedding.

When Saving Abel and Strange Daze played the same show in Minneapolis, Angie Stendel said they decided to bring the wedding to the bands.

“He promised he was going to sing at the wedding, but we made sure to make it easy for them,” Dustin Stendel said. Angie Stendel said they threw together the wedding in close to a month.

The couple was married on stage on October 12 in the middle of the Strange Daze show, just after they band played the couple’s favorite song, “I.”

“We just kind of, ‘Do you?’ ‘Do you?’ and that was it,” Angie Stendel said. “And then they sang another song, we got out and danced, and they just went on with the show.”

Their guest book is a slightly damaged cymbal off a drum kit from Dustin Stendel’s band.

“It’s just a cool way to get married,” he said. 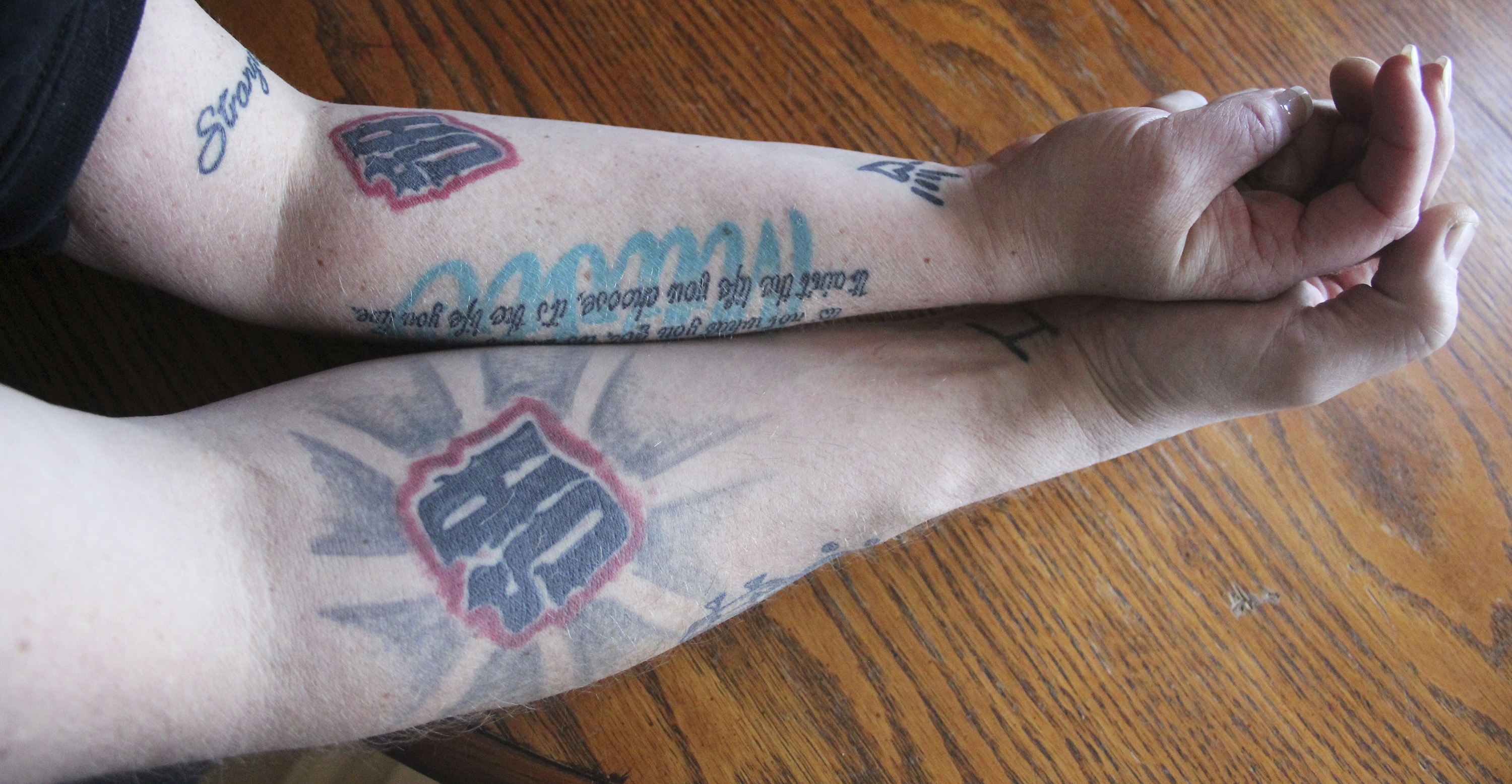 Angie and Dustin Stendel have matching Saving Abel tattos, both done by Austin tattoo artist Ryan Heath. Angie Stendel has had hers for several years, while Dustin Stendel’s is more recent. Both also have Strange Daze tattoos as well. Sarah Kocher/Albert Lea Tribune

Piper said the Grizzlies usually have five or six fundraisers a year. This year, they’ve planned one.

The community response has been huge, Piper said. Even before the band’s appearance was public knowledge, they had people messaging them on Facebook or calling Wedgewood Cove. Tickets started selling right away at midnight the night they became available. The presale tickets and VIP tables are sold out. Alfson said he expects that between pre-show tickets and those sold at the door, he expects a full venue.

Piper and Alfson said they wanted to make the concert affordable for fans, and they were able to do that in part because Saving Abel and Strange Daze accepted lower payments than they had the opportunity to. Should the Grizzlies make more than they need to fund their season, Piper said the next priority is to pour the money back into the community; he specifically mentioned youth sports.

Bartlett said fans can expect to hear some redneck revival, rock ‘n’ roll from the south and, at least from Bartlett, some blistering guitar solos. In 2017, former drummer Blake Dixon rejoined the band and Scott Wilson took over for Eric Taylor on bass. Bartlett said these switches have not changed the band’s southern rock sound.

Fans can also expect to hear a set tailored around their hits, which Bartlett said the band recognizes as meaningful moments for the fans.

“That song might be the only reason that person came out,” Bartlett said. “So we’ve got to play ‘18 Days,’ and we’ve got to get it right.”

And afterward, it’s back to the studio, where they’ve been for the first time in three years. Bartlett said the group is working with Skidd Mills, who the group worked with for hits like “Addicted,” “18 Days,” “Drowning (Face Down),” “The Sex is Good,” “Miss America” and “Bringing Down the Giant.”

“We’re adamant about getting new music out, and we just know it’s going to be good,” Bartlett said.

For the Grizzlies, what’s next may very well be another concert. Alfson and Piper said they are hoping to move forward with two a year, should things line up.

How much: $15 ahead of time or $20 at the door. Tickets are sold at www.algrizzlies.com, Chapel Comics & Collectibles or Wedgewood Cove.