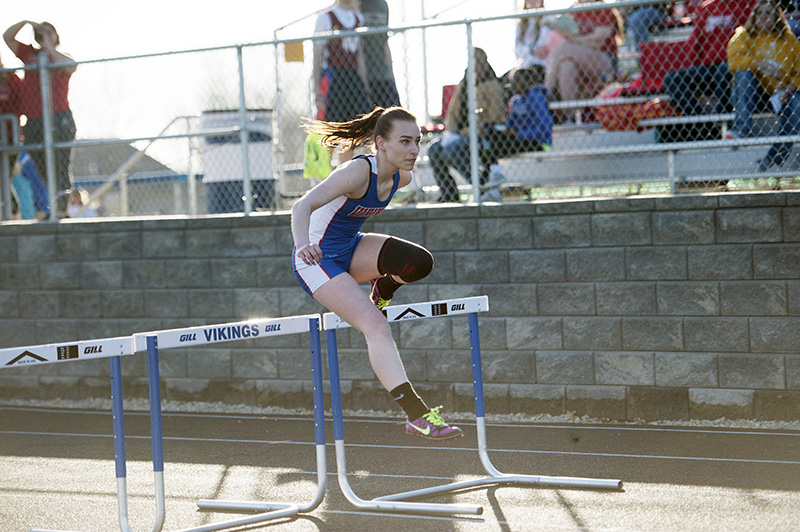 NORTHWOOD — With the district track meet less than three weeks away, the Northwood-Kensett boys’ and girls’ track teams competed in just their third meet of the season Monday night.

Starting off the afternoon for the Vikings were the field events, with both the boys’ and girls’ team giving some strong performances.

Senior Josh Jaspers and junior Marquise Berry took fourth and second place respectively in the long jump. Berry would also go on to take first place in the high jump with a winning height of 5-10. 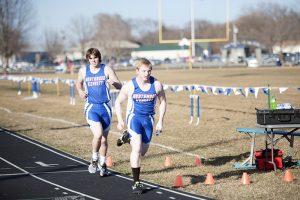 Northwood-Kensett senior Warren Cooper hands the batton off to freshman Cade Hengesteg in the 4×800-meter relay. The Vikings would finish the event in fourth place. – Tyler Julson/Albert Lea Tribune

Senior AJ Branstad finished  in third place in the shot put with a throw of 42-8 and fourth in the discus with a toss of 121 feet.

On the girls’ side,  senior Dusti Bratrud took third place in both the shot put and the discus with throws of 35-9 and 109-9 respectively.

Another notable finish for the girls’ team was sophomore Lindsay Davidson, who finished runner-up in the 3000-meter run.   The distance medley team of sophomore Jaela Parks, seniors Ivy Rollene, Mackenzi Duvall and Davidson finished in third place with a time of 4:55.48.

Other top finishers for the boys included a first-place finish for junior Logan Benjegerdes in the high hurdles and a third-place finish for sophomore Caden Schrage in the 400-meter sprint.

Through the field events and the first seven track events, the boys’ team stood in third place while the girls team was in fourth.

As of press time, results for the final six events and the final team standings were unavailable. Check back to the Tribune as final results become available.