SOUTH PADRE ISLAND, Texas — A tip-off in a Texas resort town led to the arrest of a woman who investigators believe killed her husband in Minnesota then fled to Florida, where she fatally shot her doppelganger with the intention of assuming her identity, police said Friday. 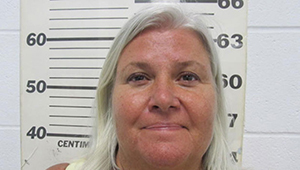 City spokeswoman Angelique Soto said Friday that a witness called authorities saying a woman matching Riess’ description was at the restaurant. Her identity was confirmed by officers and the car she was using was towed and impounded “for forensic processing,” Soto said.

Riess had checked into a local motel and was sitting at a nearby restaurant’s bar with others, though authorities don’t know if Riess had met the individuals in South Padre or elsewhere, South Padre Island Police Chief Randy Smith said Friday.

Riess was first approached by undercover officers and did not resist arrest when she was taken into custody, Smith said, adding that she did not have a weapon on her.

“I think she’s kind of built up a resilience, where she thought she may not get caught. So she seemed to have let her guard down a bit,” he said.

Riess had been on the run since at least late March when her husband, 54-year-old David Riess, was found fatally shot at their home in Blooming Prairie, Minnesota. She became the subject of a nationwide hunt.

She had been seen on March 23 at a convenience store and casino in northern Iowa. Authorities released video showing Riess approaching the store cashier, buying a sandwich and asking for directions south of the state. The store is next to a casino where authorities say Riess spent the day gambling before stopping at the gas station.

It was also on March 23 that David Riess’ business partner called authorities to ask them to check on him. The partner said no one at work had seen David Riess in more than two weeks. Authorities found David Riess’ body inside his home with multiple gunshots.

They were not able to determine how long he had been dead and could not find his wife. They learned Lois Riess may have been at the casino in Iowa, but she wasn’t there when they went looking for her.

From there, investigators believed she went to Florida where she killed 59-year-old Pamela Hutchinson of Bradenton, Florida.

Authorities were called to Fort Myers Beach on April 9 and found Hutchinson dead, with gunshot wounds. Investigators believe Riess used the same gun to kill her husband and Hutchinson, and that she killed the woman to assume her identity.

Surveillance video showed Riess smiling and talking with Hutchinson on April 5 at a brewery in Fort Myers Beach. Authorities say she may have targeted Hutchinson because the two women looked alike.

Riess is being held in the South Padre Island jail. Soto, the city spokeswoman, said it is unclear to where she will be extradited and on which charges.

“Right now it’s still in the air. We are waiting to confirm whether she will go to Florida or Minnesota,” Soto said.

The police chief said Friday that local authorities had not yet questioned Smith because they were waiting for other law enforcement agencies to arrive in South Padre.

Minnesota court records show that Riess was suspended as guardian for her disabled 61-year-old sister after a report that she had been transferring funds from a guardianship account to her own account, then withdrawing funds at a casino.

A 2015 affidavit said thousands of dollars had been spent at Diamond Jo Casino in northern Iowa, not far from Riess’ Blooming Prairie home. Riess was never charged with a crime, but was ordered to pay her sister more than $100,000.