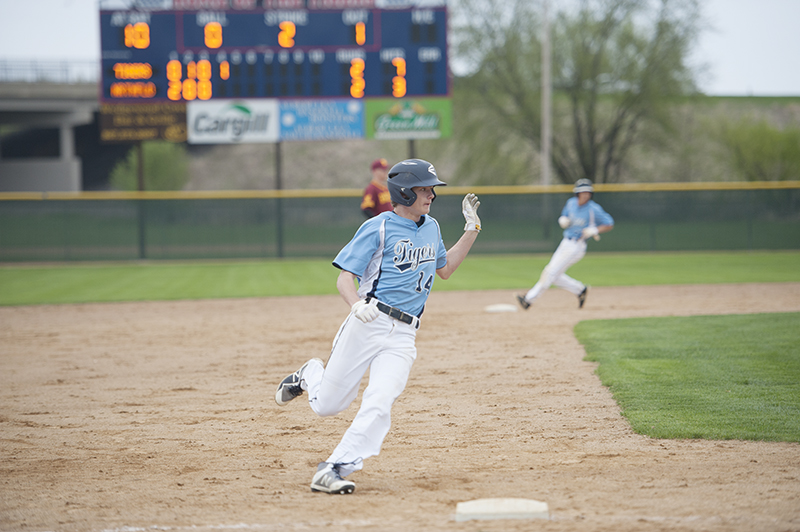 Albert Lea junior Carson Goodell rounds third in the fourth inning against Northfield during game one of Thursday’s doubleheader. Goodell would go 3-5 from the plate with two RBIs in the 9-8 win. - Tyler Julson/Albert Lea Tribune

The Tigers jumped out to a commanding lead early in game one, but were threatened late in the game by a surging Raiders offense. However, the Tigers would halt the late rally and hold on to win the first game, 9-8.

Although the Tigers hosted the game, they were considered the away team as the originally scheduled game was supposed to be played in Northfield.

The Raiders took an early advantage in the bottom of the first inning, capitalizing on a two-run RBI double. The Tigers, however, would cut into the lead in the next half inning by loading the bases with a single from senior Logan Stadheim and walks from seniors Ty Harms and Andy Thomas. Junior Carson Goodell would bring one run in with an RBI single, but the Tigers would end up leaving the bases loaded to end the inning.

Neither team was able to gain any offensive momentum over the next couple innings, until Albert Lea stepped up with an advantageous fourth inning.

Harms reached base with his second walk of the night, followed by back-to-back singles from Thomas and Goodell. Simon was able to reach base safely after an error, which in turn drove in the tying run. Senior Zach Edwards propelled the Tigers into the lead with a bases-clearing double, giving the Tigers a three-run advantage. Stadheim would bat in a run of his own, taking a 6-2 lead before the end of the fourth inning.

Albert Lea would continue the onslaught in the fifth inning, adding three more runs to the total. Goodell batted in a run with an RBI double, followed by RBI singles from Simon and Edwards. 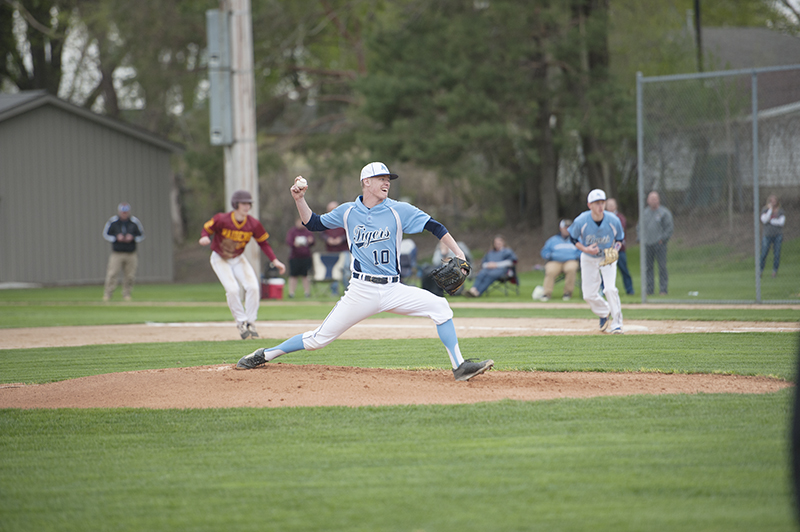 Albert Lea senior Alex Goodmanson throws a pitch in the first inning of game one against Northfield on Thursday night. Goodmanson would strikeout six batters, and give up five hits and three walks in five innings of work. – Tyler Julson/Albert Lea Tribune

The Raiders put one more run on the board in the fifth inning, but really caught fire in the sixth. They used a flurry of hits to move runners around the bases and the rally would push five runs across the plate, moving the Raiders to within one run of the Tigers heading into the final inning.

Albert Lea would go three up-three down in the seventh, leaving the door open for Northfield to cap off the comeback.

The Raiders would put two runners on board, but the Tigers were able to hold strong and thwart the final-inning rally attempt.

Starting on the mound for the Tigers was senior Alex Goodmanson. He pitched five innings, giving up three runs on five hits, striking out six batters and walking three. Harms came in for relief in the sixth inning, allowing four runs on four hits and striking out one batter.

Sophomore Gavyn Tlamka was brought in to close the game for Albert Lea. Tlamka gave up one run on three hits and struck out three.

“This is two nights in a row where we’ve played with a lot of energy,” said coach Sean Gaston. “These younger guys have started to figure out what’s expected of them and each game we’re seeing better results. Tonight was a good step in the right direction.”

The second game was rained out in the fourth inning.

The Tigers will be back on the diamond Saturday, when they host the Falcons of Faribault in another doubleheader.