His last day is scheduled for June 30. Ford, who recently married, plans to live near Alexandria on a permanent basis. He has been commuting to Albert Lea on a part-time basis. 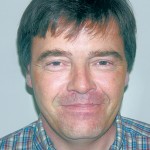 “I am proud of the work that we accomplished over the last 16 years,” he said in a press release. “It is a credit to my staff, the city and county governments, nonprofits, tenants and the community.”

During Ford’s tenure, the HRA administered Small Cities Development Program grants and collaborated in the creation of the Rock the Block initiative, a drive that included the rehabilitation of more than 40 homes.

“We all kind of sat down and brainstormed one time and came up with the idea of Rocking the Block and doing it as like a week of giving back to the community and folks in the community,” Ford said. “And, in particular, focused on rehab of housing for lower-income families, and it was a pretty effective project.”

Ford estimated there has been about $25 million to $30 million of community impact in housing and the economy since 2006. He estimated the HRA has assisted in the rehabilitation of approximately 140 owner-occupied homes over the last several years.

Ford also worked with Freeborn County on a flood mitigation program in Hollandale and other community development projects and programs in the city.

“I think we’ve had a good impact on the community,” he said.

The HRA board has formed a search committee and is expected to begin compiling a job description and profile to fill the position.

Ford said he enjoyed his time in the community.

“It’s a good community,” he said. “I’ve made a lot of good friends here and worked with some good, professional people.”

Ford expects to continue to help house animals for an animal shelter in the Alexandria area and has not decided on where he will work.

Ford called it a “pleasure” to work with other community groups.

“We’ve got a terrific board, terrific staff members, and we’ve had a good relationship with local governments,” he said. “We’ve worked with a lot of local nonprofits. It’s just been a pleasure working with them all. And without them all there, we really can’t accomplish anything, so any success I’ve had has been direct correlation to the successes that those people helped us make.”

Albert Lea Mayor Vern Rasmussen Jr. said Ford “has been a pleasure to work with,” and has a solid knowledge of the city’s housing. Rasmussen cited Ford’s work with the Small Cities Development Program and Rock the Block.

A 16-year-old New Richland girl missing since Tuesday afternoon was found safe in Albert Lea Thursday evening, according to the... read more